How Many Bank Accounts Should You Have?

Over the years, several readers have asked some variation on that basic question, along with some obvious follow-up questions. How many checking accounts should I have? How many savings accounts should I have? Should they be at the same bank, or at different banks? Does having more accounts increase the risk of identity theft? Does having fewer accounts make money management more difficult?

I thought I’d address all of those questions in one place.

For Most People, There’s No Reason To Have Accounts at Multiple Banks

That’s the core of all of my banking advice, right there. For the vast majority of people, having your basic banking services – a checking account and a savings account – at a single bank is probably the best move.

There are a bunch of reasons for this that boil down to two major elements.

First of all, keeping your business at one bank makes banking and account management simpler. If you have a banking issue, you know right where to go with it. You don’t have to worry about multiple checkbooks, multiple routing numbers, multiple account numbers, and all of that. You have your money centralized in one account, reducing the risk of things like overdrafts due to having things spread out across multiple accounts and banks. You also may find it difficult to keep up with minimum balances if you have your money spread across lots of accounts.

Second, the fewer banks you do business with, the lower your risk of account fraud and identity theft. Your personal data is simply in the hands of fewer businesses, thus there is a lower likelihood of an intrusion at a random bank hitting your data.

That isn’t to say there is never a reason to have accounts at multiple banks.

There Are a Few Specific Reasons to Have a Second Bank

One reason is that you have a specific reason for wanting some of your money separate. For example, perhaps you want to have an emergency fund at a second bank so that you don’t have instant access to it with an ATM card. You carry your bank card around for your primary bank, but for your bank that just has your emergency fund, you leave the card in a safe place.

Another reason is that you might be in the process of transitioning to another bank. When you move from one bank to another, it’s a good idea to have a period of adjustment where you make sure that you haven’t forgotten any automatic transfers or anything like that at your old bank while you’re mostly using your new bank fo everything. That overlap period is a great reason to keep two accounts open, but eventually you’ll want to close out the old account.

There are obviously relationship-related issues as well. Perhaps you and your partner maintain separate accounts by agreement, or perhaps there is a deep trust issue in your relationship or you’re preparing for separation.

Here’s the issue: all of these reasons are niche reasons that don’t apply to most people. There’s not enough value in chasing better interest rates in savings accounts and CDs right now to bother with it. Most people aren’t in the midst of a bank transition at any given moment. Most people aren’t in a relationship that is in crisis (although quite a few people in long term relationships do maintain separate accounts – Sarah and I did, at first).

What If I Have Extra Accounts?

If you’re in a situation where you have accounts at multiple banks without any good reason for doing so, I recommend closing the accounts you don’t frequently use and centralizing your accounts at one bank. However, I wouldn’t simply charge into a bank and close the account immediately.

Rather, if I were about to close a seldom-used account, the first thing I’d do is look through the last year or so of statements for that account and see whether there are any deposits or withdrawals that are still going through that account. For each of those, I’d make sure that those deposits and withdrawals were changed to go through my primary checking account at the bank I’ve chosen to use for most banking. Once you’re sure the accounts aren’t going to be hit with transactions any more, I’d close the accounts by visiting that branch.

How do you decide which bank to use? For a primary checking account and a savings account that won’t be holding a huge balance, which is how most people bank, I wouldn’t worry about interest rates. Save that concern for situations where you’re chasing a rate and have enough money to actually make that rate-chasing worthwhile.

Rather, I’d make sure that there were no fees on basic account usage, that there is robust online banking available, and that there’s at least some easy access to an actual person for customer service issues. Ideally, that means that there’s a local branch somewhere near you so you can actually go in and talk to a teller or to a branch manager if there’s an issue. Banking customer service solely by phone can be lacking, and having everything just work smoothly is something you really, really want from your primary bank.

The core ideas here are simple.

Unless you have a specific reason for doing otherwise, it’s a wise idea overall to have your banking activity all channeled through a single bank. This simplifies things and reduces the chance of identity theft.

There are a few specific reasons for having multiple banks, but those issues are fairly rare, and for most people, a single bank is likely the best solution.

When you’re choosing which bank to use as your primary one, focus more on low fees and good customer service in the form of online banking and, if possible, direct access to tellers and branch managers through having a local branch available near you. 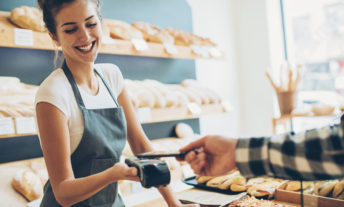