Deciding to be more productive is easy. Figuring out where to start is a bit more tricky. We wanted to see how much time (and money) could be saved by implementing five of the most talked-about productivity hacks, so we rounded up a few volunteer researchers from The Simple Dollar team and put each hack to the test.

One thing to remember

Before we dive into the results, it’s important to remember one thing: productivity hacks are habits, not silver bullets.

Good habits take time to develop. If you’re looking for a magic button that will add three hours to your work day, you’ll find out pretty quickly that it doesn’t exist. Remember the first time you rode your bike without training wheels? Were you ready to hop on a motorcycle at that point? No. Productivity hacks are long-term investments that take grit and persistence, so don’t be discouraged if you don’t see major results right away. 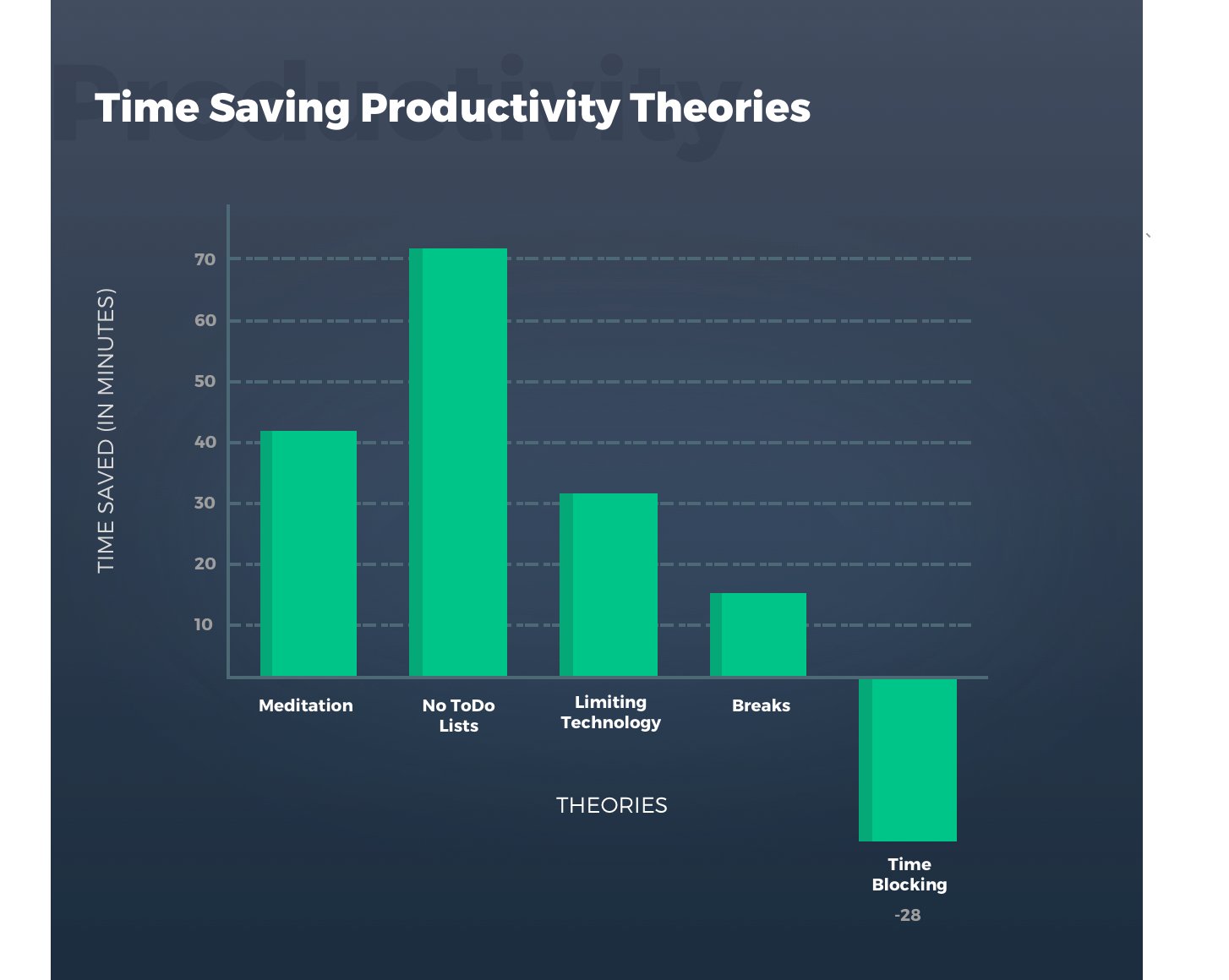 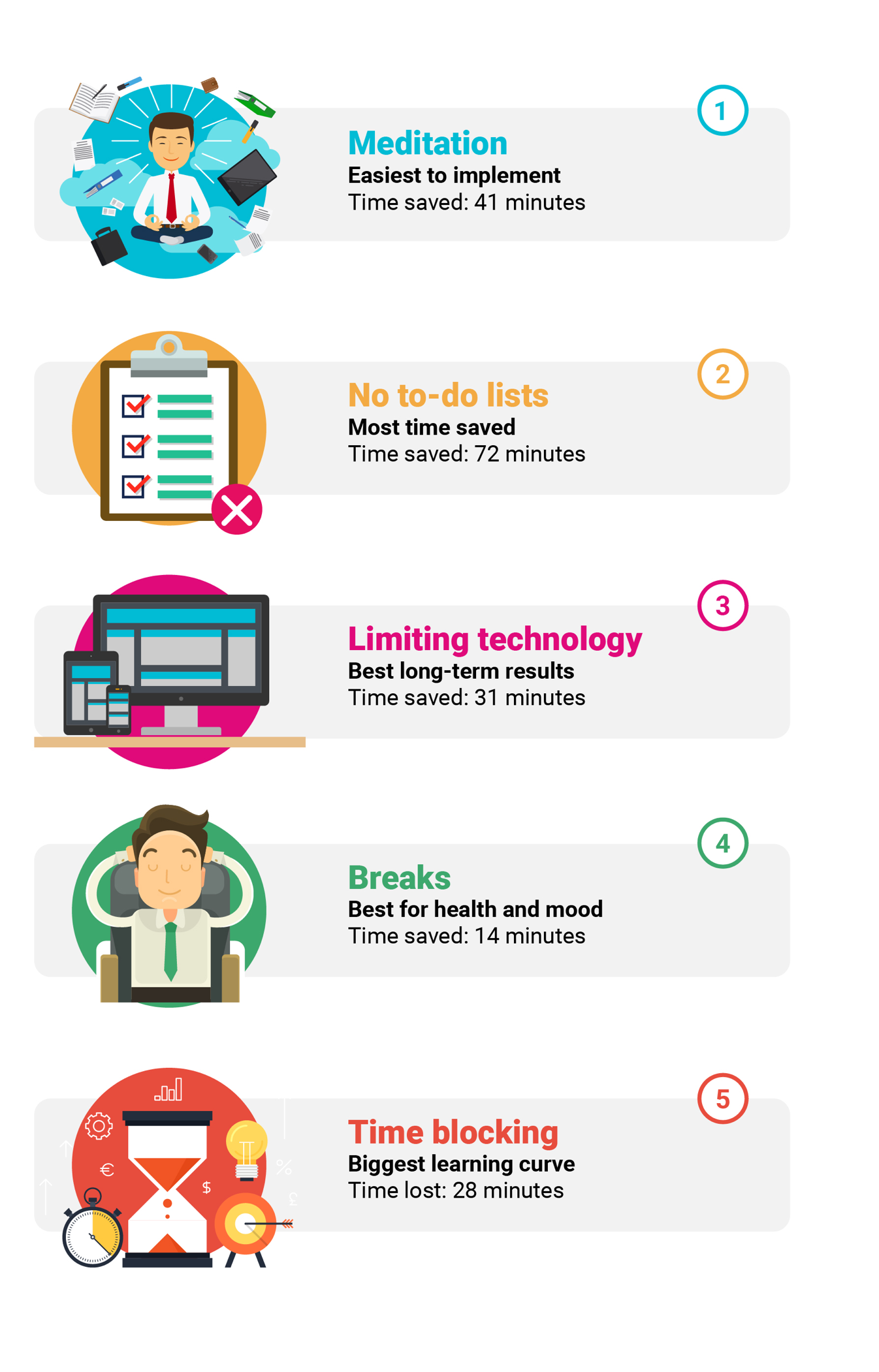 Meditation isn’t just taking a break; it’s the practice of focused thought and breathing that can improve the brain’s neuroplasticity. Among other things, that means it improves the connection between the lateral prefrontal cortex — also called the Assessment Center — and the rest of your brain, allowing you to evaluate things from a more rational and balanced perspective. Meditation can also reduce blood pressure, increase attention, and even affect our genes: A Harvard study found that the body’s relaxation response can dampen genes involved in inflammatory response within minutes.

The bottom line is, when performed correctly, meditation is an excellent practice with multiple long- and short-term benefits that help us make better decisions, feel less anxious, and improve our memory.

Our researcher used three different methods of meditation in one four hour period (from 1pm to 5pm). Her goal was to emerge from each session focused and refreshed.

Meditation saved 41 minutes in one afternoon.

Here’s a breakdown of each type of meditation we used, along with a few helpful resources:

Overall, our researcher was most impressed with just how refreshed she felt after each mediation session. The results were pretty good too: When the researcher compared the same four-hour period from a previous work day with her test, she noticed that she finished up about 41 minutes early. That puts meditation as the second most time-saving productivity hack we tested. (Cutting to-do lists came in first at 72 minutes.)

One of the most interesting things we learned is that awareness meditation, while soothing, wasn’t the most effective way to increase productivity. Our researcher found herself still very interested in her surroundings while attempting to re-focus on the task at hand.

Replacing to-do lists with a schedule: Most time saved

To-do lists have a major flaw: they don’t account for time. Time happens to play a major part in being productive. Scheduling your day, rather than arranging it into to-dos without deadlines, accomplishes a couple of things. First, you begin to learn more about yourself — and without that self awareness, you won’t be able to push yourself toward the next level. How effectively could a runner train without ever timing laps? Schedules also employ a sense of urgency that you don’t get with a priority-based structure. The feeling of “I only have 45 minutes to do this” is more motivating and less stressful than having three “high priority” tasks in your backlog.

To test this theory, our researcher (a full-time content writer) scheduled out every single minute of the day from 8am to 5pm, so nine hours in total. The schedule included a 30 minute lunch and two 10 minute breaks to walk around — plus a 30-minute block dedicated to checking emails and other notifications. Our goal was for the researcher to see a drastic improvement in focus and self awareness throughout the day. The results were incredibly promising.

Removing to-do lists shaved an average of 10 minutes off every task (72 minutes in total).

Our researcher was surprisingly fulfilled with the amount of work that he accomplished. He was also a bit more exhausted than usual come 5pm. Remember: Just like the first day of a new workout routine, your mind and body have to go through a period of adjustment when you make changes to your workflow.

Preparing for this hack took about 15 minutes of focused thought the night before. But it was totally worth it: The hack knocked an average of 10 minutes off every work-related task when compared to the time that was allotted for each one on the calendar. In total, 72 minutes were saved (between 8 tasks). Subtract the 15-minute investment the night before, and the researcher freed up 57 minutes.

The potential ROI for this hack is pretty similar to the others when you consider the time required to prepare. But, as you practice, you’ll become more efficient and save even more time.

If don’t put quality time into creating your schedule, you probably won’t see quality results. Make sure you block out time to prepare for the upcoming day — the best time to do this is the night before — and thoroughly think through each event on your calendar, the effort it takes, and what roadblocks might arise.

Technology is a vehicle for extreme productivity. It’s also one of the biggest time sucks on the planet. Take smartphones, for example: As of March 2017, the average American adult spends just under three hours on a smartphone every day. Setting boundaries for your technology usage is a great step toward regaining your focus (and daylight).

One of the most common ways technology kills productivity is by keeping us up at night. You aren’t your best when you’re sleepy (your brain actually cleans itself while you’re asleep), so we chose to focus on getting a good night’s rest. Our test banned laptop, smartphone, and other blue-screened device usage after 7pm because light emitted from LCDs can restrain production of melatonin and throw your circadian rhythm for a loop. The goal was, by sleeping better and waking up earlier, our tester could increase productivity on the job. And it worked.

Limiting tech before bed saved about 30 minutes thanks to increased morning focus.

Our researcher was surprised at how big of a difference this made on his bedtime routine. On a normal day, he’d usually wind down around 11pm, and it might take him an hour or so to actually fall asleep. Without the added stimulation of blue light and the distraction of notifications, Netflix, and social media, he got to bed around 10pm and fell asleep within thirty minutes.

Thanks to better sleep and an earlier start the next morning (6am), he accomplished the same amount of work from 7am to 9:26am that he normally achieves in a three-hour stint from 9am to 12pm — that’s close to a 20% boost in efficiency.

Limiting technology is about making rules.

The best way to prevent yourself from being distracted by technology is to set some rules. Here are a few more jumping off points to help you find the right methods for your lifestyle.

Breaks: Best for health and mood

This one’s pretty simple: our brains are designed to focus in intervals. After about ninety minutes, we naturally need a quick break to refresh our mind. After that, we hit the point of diminishing returns. There are all sorts of strategies you can utilize break time, but the most important factor is that you completely unplug from work-related thoughts and tasks during your break.

Our test split up both the morning and afternoon work hours with a 15-minute physical activity (we used yoga, but the possibilities are endless).

What we learned is that it’s difficult to quantify the effects of a productivity hack like this in one trial, but compared to our researcher’s normal 490-minute work day, it only shaved off about 15 minutes in total. What was far more noticeable was the difference in our researcher’s mood and overall energy level throughout the day.

This should come as no surprise, because regular exercise, among a world of other benefits, helps reduce fatigue. Taking any sort of physical break is a proactive measure against neck pain, digital eye strain, and other ailments that can cause you to be less productive. So by prioritizing breaks in your schedule, you’re saving time that you might have lost down the road.

Other types of breaks to consider

Like breaks, time blocking relies on the idea that our brains work best in focused intervals, but takes it a step further by dividing your tasks into equal sections throughout the day, separated by short breaks. The idea is, by capitalizing on your body’s attention span (which is different for everyone), you can find a seriously productive rhythm.

Our researcher split up a three-hour period into 25 minute bursts for work and took increasingly longer breaks after each one. Here’s a quick breakdown of her schedule:

If you don’t like pressure, this hack might not work well for you. Our researcher felt pretty good after the first break but fell behind in the second session. That left her feeling pressured to catch up during the third session and actually made things worse. Compared to a normal afternoon, she lost 28 minutes.

Don’t give up on time blocking too quickly.

The general rule of thumb is that the brains works best in 90-minute intervals, but there are always exceptions. The success of this productivity hack is especially dependant on how you work. Twenty five-minute blocks didn’t pan out so well for our researcher on her first try, but 40- or 90-minute intervals with longer breaks might have been more successful. You’ll need to experiment with a few different setups to find the one that’s most effective for you. We recommend starting with the Pomodoro method.

Our results are a combination of our researchers’ personalities and preferences — your mileage may vary. Use this research as way to jumpstart your game plan for a more productive lifestyle. Start with the productivity hack you think you could benefit from the most, and don’t be afraid to experiment!

Latest from Trent
Breaking Through the “Store Brand Stigma”
Looking Back on a Year Without Cable
Utilizing Balance Transfer Credit Card Offers
Read more from Trent
Featured on: