Born to Buy: The Commercialization of Public Schools

This is the eighth discussion in a “book club” series on Born to Buy by Juliet Schor, which focuses on consumerism issues and young children. You can

jump back to the first discussion if you’d like. This discussion covers the whole of chapter five, “The Commercialization of Public Schools.” 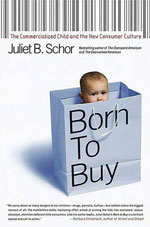 A significant portion of this chapter has to do with Channel One, which is basically a ten-minute “news” program delivered directly to schools – coupled with two minutes of commercials, of course. Schools who participated were given a lot of equipment, along with the promise of delivering compelling content to the students in exchange for merely guaranteeing that a certain number of students watched each day.

For a while in junior high, we were jammed into a classroom and Channel One was turned on for all of us to enjoy. Most of the students slept through the news portions, but I do remember an ad for Pepsi that was very loud – much louder than the rest of the programming – and it triggered some of the slumbering students to wake up and pay attention to what was going on.

At the time, I was basically indifferent to all of this. I told my teacher that I thought it was dumb, and he basically agreed but said that if it encouraged kids to think about current events, then it was worthwhile – and I pretty much bought that idea.

Now I’m not so sure, and Schor makes a very good case against it in this section, along with other in-school marketing techniques.

Does Marketing in Schools Matter?
On page 86, Schor states:

Studies comparing Channel One to non-Channel One schools show that the program affects kids’ attitudes. A study of two Michigan high schools found that Channel One students are more likely to agree that “a nice car is more important than school,” that “designer labels make a difference,” and that “wealthier people are happier than the poor.” Channel One students have also been reported to feel that the products advertised are good for them, because they’re being shown in the classroom.

In other words, students by default trust what’s presented to them in the classroom.

It’s easy to talk about educating children to guard against this kind of stuff. It’s also easy to blame school administrators and teachers for letting this in the classroom. Frankly, though, the blame for things like this falls on society in general. Every time we vote down a proposition to fund schools, we push them a little closer to things like Channel One. Every time we don’t get involved and pressure our politicians to adequately fund schools, we force school administrators to make tough choices about what compromises have to be made. As Schor says on page 90, “the main impetus for commercialization is the chronic underfunding of schools.”

If you really want to make a difference with things like this, get politically involved. Send letters to your senators and your representative in Congress and every person representing you in the state legislature. Look for political action committees to join to help get more funding for schools. Don’t just sit there and complain about it if it bothers you – do something. What’s my “something”? I’m getting involved with my district’s school board.

Is private school the answer for my child? Perhaps. It’s

quite expensive, but it does have a lot of benefits. No matter what you choose, though, the answer is to be involved – and not just in your child. Look for ways to change the larger issues as well.

Creative Thinking
I will give the marketers credit for creativity. Most of this chapter lists various ways marketers have found their ways into classrooms. Here are three that I was particularly impressed by.

General Mills paid Minnesota teachers $250 each to paint ads for Reese’s Puffs cereal on their cars and instructed them to place the cars next to where the school buses parked.

In 2001, NetworkNext announced 500 contracts with schools to show ads in return for a mobile computer unit to use for PowerPoint and other presentations. When the teacher shows a slide, banner ads for Rock Star video games, Wal-Mart, Visa Buxx cards, and Coty products appear on the screen.

In other words, marketers use every technique you can imagine to infiltrate the classroom, an area where in theory a student is supposed to trust the teacher and have their mind open to absorbing new ideas. It’s not just limited to stuff like Channel One – it’s in every aspect of schools.

When I was in school, our school was given a mountain of paper book covers that depicted ads for various companies. Not only that, there was a stipend given to pay some student workers to cover all of the textbooks for the school in these covers. Since these covers could reduce actual wear and tear on the books and extend their life a year or two at no cost to the school, our school obviously went for it for at least one year. Thus, every time we sat down to learn and looked down at the cover of our book, we saw ads.

It goes on and on and on – and the root cause of it is schools that don’t have enough money to do the things they want to do. So they find other methods – and marketers are happy to help.

Curriculum Editing
Even more interesting is the idea that companies and marketers are actually developing teaching materials for the classrooms, providing teachers with the curriculum and materials needed to teach a topic. A pair of great examples comes from Schor on page 93:

A Kellogg’s breakfast curriculum presents fat content as the only thing to worry about when choosing breakfast food. There is no mention of sugar or salt in Kellogg’s cereals. A first grade reading curriculum has the kids start out by recognizing logos from K-Mart, Pizza Hut, M&M’s, Jell-O, and Target.

These are just two of the examples from the book, but they get the idea across loud and clear: marketers present ready-made materials for teachers to use in the classroom that slip in some corporate marketing, again taking deep advantage of the level of classroom intellectual openness and trust.

Most good teachers would see right through this stuff and not present it, but let’s be frank – there are a lot of teachers out there that would be happy to have a curriculum already made for them and would justify such marketing stuff as “consumer education.”

It again comes down to one thing: be involved. And by that, don’t just be directly involved in your children’s education. Step up to the plate and make an effort to seek societal change, because when students are engaged in brand marketing at such a young age and in a trusted environment like a classroom, the next obvious step is for them to become consumers, continuing the trend of overspending and self-confidence that relies on the stuff you have, not on the person you are.

The next discussion, coming in three days, will cover the first half of the sixth chapter, “Dissecting the Child Consumer,” starting on page 99 and ending on page 108 at the subheading “Inside the Child Brain.”