Getting Things Done: The Power of the Next-Action Decision

This is the twelfth entry in a fourteen part series discussing the time management classic Getting Things Done by David Allen. New entries in this series will appear on Tuesday afternoons and Friday mornings through July 16. 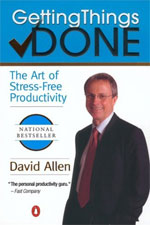 One key theme in this book is the importance of coming up with a “next-action” list, which is essentially a “to-do” list. What makes the idea stand out in this book is that there’s a clear process needed to assemble that list out of the large clump of things floating around in your head and sitting on your desk that you need to do.

One big effect of this is that you often wind up with a pretty big pile of stuff, particularly right after you do a “brain dump” and get all of the stuff you’re supposed to do out of your head. Some of that stuff is a straightforward “next action,” but some of it isn’t.

What do you do with the stuff that isn’t obviously a “next action”? You analyze it and figure out what the next action is in that idea that you have. I really like the example of this that Allen lays out on page 238:

He responds, “Well, I need new tires on my car.”

“So what’s the next action?”

At that point the client usually wrinkles up his forehead, ponders for a few moments, and expresses his conclusion: “Well, I need to call a tire store and get some prices.”

In other words, if there’s some vague thing you need to do, you usually just need to think about it for a moment to figure out what the next action step is. Then, add that next action step to your list.

Quite often (in fact, almost always), that next action step leads you down a sequence of actions that leads you to complete that vague thing you’ve been putting off.

For example, in that tire scenario, after calling a few tire stores, the fellow has a list of options in front of him for tires. He can drop that in his inbox if he wants, or he can keep going and set up an appointment to get new tires at the shop he prefers, adding that appointment to his calendar. Once he goes to that appointment, the vague “tires” element on his list – something vague enough that he kept avoiding it – is now completed and it’s one less thing on his mind (and on his “next actions” list).

I do this all the time. Quite often, my initial collection of some idea or some task – usually jotted down in a pocket notebook – is really vague. It’ll be something like “tires” or “chicken alfredo” or “Rudy Jimenez.” When I retrieve that note later on when I’m processing my inbox, I’ve learned that when I see such a vague note, I should spend a bit of time thinking about it and figuring out what comes next. After that thought, I can add real actions to my next action list, like “Set an appointment to get new tires on the Pilot” or “Buy the ingredients for that bookmarked chicken alfredo recipe” or “Call Rudy Jimenez about the youth baseball league meeting.”

Of course, if you keep carrying this thought process further, you begin to see a different problem. What if you have a vague and amorphous task that seems to get more difficult the more you think about it? Income taxes come to mind – it seems like a simple thing, but if you sit down and start piecing through it, it starts to seem bigger and bigger and bigger.

Quickly, you reach a point where the task seems overwhelming – and that’s the point at which procrastination often begins. On page 241, Allen touches on this:

And so a lot of people [fall into this trap]. Because they’re so smart, sensitive, and creative. In my many years of coaching individuals, this pattern has been borne out more times than I can count – usually it’s the brightest and most sophisticated folks who have the most stuck piles, in their offices, homes, and heads.

In other words, smart, sensitive, and creative people tend to be very good at seeing all of the intricacies of a large problem – and it overwhelms them. Rather than dealing with all of these little elements and details, we put it off.

This is absolutely the wrong approach. If you have one of these fairly large and seemingly complex tasks in your inbox, your best bet is to spend some time figuring out nothing more than what your next action is to move it forward, then add that to your next action list.

In other words, just break it down. Don’t get scared by all of the details you see further down the road. Focus on nothing more than the very next thing that you need to actually do to move this thing forward. When that’s complete, move on to the next step. And the next.

There is another solution: intelligently dumbing down your brain by figuring out the next action. You’ll invariably feel a relieving of pressure about anything you have a commitment to change or do, when you decide on the very next physical action required to move it forward. Nothing, essentially, will change in the world. But shifting your focus to something your mind perceives as a doable, completeable task will create a real increase in positive energy, direction, and motivation.

That’s why getting in the routine of just identifying the next thing you need to do to move something forward and simply doing it is so powerful. It makes your objectives clear. It gives you something specific to actually do instead of procrastinating. It lifts your mood and your attitude.

To put it simply, it gets things done.

On Tuesday, we’ll talk about the power of outcome focusing.