Review: A Commonsense Guide to Your 401(k) 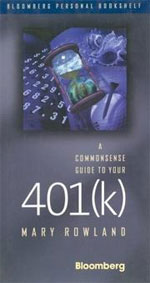 One common request I get is more discussion on the specifics of retirement plans. For me, whenever someone mentions a topic that they want to hear more about, that means a trip to the library. I try to find books that cover the topic well, particularly from a fact-oriented point of view.

This is exactly the angle of A Commonsense Guide to Your 401(k) by Mary Rowland. Part of the “Bloomberg Personal Bookshelf,” a series of books on personal finance and investing topics, it seeks to discuss from a very fact-based perspective what a person needs to know about 401(k) plans and how to use them for retirement.

The Retirement Landscape
The book opens with a section briefly covering the retirement landscape in general, which is the one place where this book really looks at non-401(k) retirement options, particularly for the self-employed and other groups. The big idea here is that you need to be prepared for what’s going to happen down the road, and it’s going to take a lot of preparation, ideally starting now. The information here really moves almost too fast to really put non-401(k) plans into perspective, though.

401(k) Plans: The Basics
Here, Rowland carefully discusses what a 401(k) plan is, how it works, and why you should invest in it. It’s a retirement vehicle, of course, but it’s one tied to your employer and often restricted by whatever plan or arrangement your employer has set up with the investing house offering the plan. Usually, money is put directly into the account as a deduction from your paycheck before you ever take it home. That money usually comes out before taxes are calculated, meaning that Uncle Sam gets a smaller slice of your pay now but will get a slice of that 401(k) money later on when you’re retired.

How to Get In and Get Out
Rowland moves onto the key processes in opening a 401(k) account, which usually involve signing up through a plan representative in your workplace. On the flip side of that coin is the withdrawal phase, where you sign up to begin taking regular withdrawals from your 401(k) at retirement. The topic of rolling over a 401(k) is also touched on here a bit.

Investing It
The big part of signing up for a 401(k) is the question of investing, and it’s the part that often scares people. How do you know what to invest in? Generally, all you need to do is invest in a wide diversity of things and, as you get closer to retirement, slowly shift that diversity into less aggressive things (less stocks, more bonds, for example). Many plans offer a “target retirement” fund which does this for you automatically and is usually the best choice for people who don’t want to handle the minutae for themselves.

Preparing for Change
What things can you do as retirement nears and you’re about ready to begin collecting that 401(k) money? Rowland offers a ton of ideas here, most of which are simply really sound personal finance ideas. Pay off your debts. Understand what your new lifestyle and income level will be like. Delay collecting Social Security so that you can collect a bigger benefit.

Steps to Take in Retirement
What do you do when you’re actually retired? Many of the tactics here deal with specific situations that people may find themselves in, such as a temptation to take out lots of money and splurge (don’t) or how to utilize “alternative” retirement strategies like pension max (don’t). Instead, learn to maximize every dollar you have without risking the dollars that are yet to come.

403(b)s, 457 Plans, Etc.
This is something of a tie-it-together section that discusses alternatives to 401(k)s that some people may have, such as 403(b) and 457s. Mostly, these plans are really similar to 401(k)s for most purposes, and Rowland mostly just focuses on talking about the minor differences between them here.

Having said that, it really doesn’t instruct you too much on broader retirement issues and other places to invest. This is a 401(k) book, through and through. Many people seem to substitute “401(k)” in their head for “retirement savings,” but the terms are not interchangeable. This book provides a great view of 401(k)s, but a narrow view of a total retirement picture.

This is a great read as part of your reading on retirement issues, supplemented by a book that provides a broader picture and other specialized books on retirement. It’s incredibly informative, but on a very narrow topic.

Check out additional reviews and notes of A Commonsense Guide to Your 401(k) on Amazon.com.