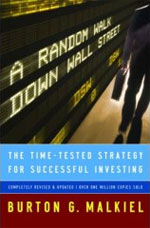 This week, I sat down with one of the modern classics on stock investing, Burton Malkiel’s A Random Walk Down Wall Street. I was already aware of the premise behind the book – the stock market is pretty efficient and most everyone is wasting their time trying to find inefficiencies to exploit – but I was interested in finding out what information inside could really help me as an individual, both as an investor and as a person interested in improving my personal finances. Did the book succeed? I’ll let you in on that at the end, but let’s walk through the book and see what we can learn from it.

Walking Through A Random Walk Down Wall Street

This book has a lot of information in it. I wrote a paragraph summary of each chapter below so you can get an idea of some of the finer points, but I could go on for weeks analyzing this book. Please note that I’m reviewing the ninth edition of the book, the latest one in hardback; some earlier editions may be missing some chapters and points.

Chapter 1: Firm Foundations and Castles in the Air
The book starts off by defining two basic investment ideologies, the firm foundation theory and the “castle in the air” theory. The firm foundation theory basically says that you should invest based on the actual real value of what you’re investing in; for example, if you buy a stock of Coke, it should be based on what the value of the Coca-Cola Corporation is. The “castle in the air” theory basically says that you should invest in response to what the crowds are doing and that you can make more money by riding the waves of people who are either following trends or trying to invest based on a firm foundation. Which one is right? The truth is that they both are, but at different times.

Chapter 2: The Madness of Crowds
This chapter is quite entertaining: it discusses financial “crazes” throughout history, including my personal favorite craze of all, tulipomania. In all three examples (tulipomania, the South Sea bubble, and the Wall Street crash of 1929), a market grew like gangbusters until everything was overvalued, then the values rapidly returned to normal. Graphs of prices in all three examples bear this out; within a year or two of the end of the craze, the prices had returned to roughly the same value as they were before the big run-up.

Chapter 3: Stock Valuation from the Sixties through the Nineties
Even more amusing, Malkiel continues this theme of markets that go crazy and then level off again by using several examples of cross-sections of the stock market where this occurred throughout the last fifty years. I was aware of the overvaluation of food stocks in the 1980s, for example, but to see that it has just repeated over and over again is an eye-opener. Take the Nifty Fifty from the early 1970s – people were basically speculating in blue chips, and by the end of the decade, the speculation had gone away and the stocks returned to normal blue chip levels.

Chapter 4: The Biggest Bubble of All: Surfing on the Internet
This all of course leads to the dot-com boom of the late 1990s and the bust in the early 2000s. Malkiel basically argues that this huge bubble was the result of a confluence of the same bubbles as before, all working in concert: the IPO mania that fueled the early 1960s stock market, the “smoke and mirrors” businesses of the South Sea bubble, and the chasing of future efficiencies that happened in the 1850s with railroad stocks all happened again with the dot-com businesses. And, again, it peaked and crashed and everything returned to roughly as they were before. Coincidence? Malkiel’s main point in the whole book is that it’s not a coincidence. Markets are efficient and time and time again, when inefficiencies occur, it won’t take long for the market to weed them out.

Chapter 6: Technical Analysis and the Random-Walk Theory
This chapter is basically a complete decimation of technical analysis; there’s no other way to really put it. Perhaps the most devastating part is when he compares the stock market to the average length of a hemline in women’s fashion and finds a correlation. In other words, technical analysis spends all of its time looking for correlations – but most of these correlations are spurious at best. By spending all of your time looking at charts, you’re essentially cutting yourself off from a broader picture, making the spurious correlations even worse.

Chapter 7: How Good Is Fundamental Analysis?
Malkiel has at least some respect for fundamental analysis because it is based on foundational logic and is open to accepting wide varieties of data. However, he finds fundamental analysis to be deeply flawed as well. There are many reasons why fundamental analysis can be completely off base: random events (like 9/11), dubious financial data from companies (like Enron), human failings (emotional attachments and incompetence), the loss of good analysts to better positions, and so on. Basically, Malkiel concludes that professional analysts may have a slight leg up on individual investors, but this is mostly due to having more ready access to information and other materials and the advantage is minimal.

Chapter 8: A New Walking Shoe: Modern Portfolio Theory
From there, we move on to portfolio theory, which is basically the idea that people should have a diverse selection of investments and that these investments should maximize the rewards while minimizing the risk. Malkiel basically argues that it doesn’t matter how much you diversify your stocks (and other assets), you are still exposed to some risk. In general, he has some respect for modern portfolio theory, but he goes on in the next chapter to point out why minimizing risk isn’t always the best strategy.

Chapter 9: Reaping Reward By Increasing Risk
This was easily the most complicated chapter in the book and left me taking some lengthy breaks in the middle to digest the information. This chapter basically takes the ideas from the previous chapter and introduces a new factor: beta. Basically, beta is a number that expresses how closely an individual stock matches the behavior of the overall stock market in the past. Thus, in theory, stocks with a high beta should jump like crazy during a bull market and then dive like Greg Louganis during a downturn. With a very wide scope, this is true, but in specifics, it rarely turns out to be highly accurate.

Chapter 10: Behavioral Finance
This chapter takes a close look at behavioral finance, which applies human cognitive and emotional biases to their investment choices and thus how these biases affect overall markets. From behavioral finance, Malkiel concludes that the only parts that really work are the ones that are common sense: don’t invest long term in what’s hot right now, don’t overtrade, and only sell stocks that are losers.

Chapter 11: Potshots at the Efficient-Market Theory and Why They Miss
Here, Malkiel walks through a series of criticisms of the overall idea of the book, which is that the market is generally very efficient and always reverts to the mean. He starts off by discarding some poor arguments and gradually moves onto better and better arguments, ending with evaluating Benjamin Graham’s idea that one should identify and invest in value stocks for the long term. He easily deconstructs most of them and only has significant trouble with Graham’s argument. I felt he slightly missed the boat on what Graham has to say, which is that value stocks will always have value. Malkiel points out that over a long period, both growth and value stocks do match up with the overall market, but value stocks do not have the monstrous dips that growth stocks have.

Chapter 12: A Fitness Manual for Random Walkers
This chapter is rather ordinary, as it is a basic chapter on how to build a healthy investment foundation, similar to ones that appear in most investment books. Get an emergency fund, make sure you’re well insured, put as much investment as you can into accounts that are tax-sheltered (like Roth IRAs and 401(k)s), and so on – standard personal finance advice. He does strongly encourage home ownership, though. As for the question of what exactly to invest in, the next two chapters handle that.

Chapter 13: Handicapping the Financial Race: A Primer in Understanding and Projecting Returns from Stocks and Bonds
Ever heard the phrase “past performance is no guarantee of future results”? That’s what this chapter is about: you can only use past performance as a very, very broad indicator of the future. In short, Malkiel believes that over a very long period, stocks will beat bonds and inflation, but with any period shorter than a decade, it’s basically random and it’s all about the risk you can stomach.

Chapter 14: A Life-Cycle Guide to Investing
Given that, the next chapter is basically a detailed guide on how to invest for yourself. In short, when your goal is more than a decade off, you should be heavily into stocks for the long haul, but if your goal is in the shorter term, you should be widely diversified, tending towards investments with lower risk (bonds and cash) as the big day approaches. In other words, Malkiel believes that investing in a target retirement fund is a really good idea.

Chapter 15: Three Giant Steps Down Wall Street
The book concludes with some more specific investment tips. In short, if you don’t have the time to micromanage things, invest in an index fund. If you want to chase individual stocks, minimize your trading, only buy stocks that have numbers that are reasonable, and look for ones that have stories upon which people can build the “castles in the sky” mentioned in the first chapter. As for other options, like managed funds? He basically says no, or gives a very hesitant yes with a ton of caveats.

We know one thing for sure: there’s a ton of information packed away in this book concerning how the stock market – or any market – works. Most of the book focuses on different ways of analyzing the market to find an edge – and concludes that they’re largely junk; the end of the book takes what was learned from this and applies it to investing in general.

This might sound really weighty, but it’s not. This book was very easy to read, much easier than I expected before I opened the cover. There’s a solid sense of humor behind it, nestled in with all the information, and the information itself is presented in a way that’s easily digestible.

If you have any interest in how the stock market works, you should definitely read A Random Walk Down Wall Street. It gives a very critical look at what most people are saying about the stock market – and why a lot of it is potentially rubbish. It also clues you in on how to invest if you take that view of the world.

Of course, there are many other perspectives on the market, and the truth is that the stock market can be exploited by individuals, but that exploitation requires a lot of work, work that is simply not feasible for most people (or even for most investment professionals). While I recommend buying this book, I also recommend pairing it with a solid book on individual stock investing to get another perspective. I’ve enjoyed both Phil Town’s Rule #1 and Jim Cramer’s Real Money. Taking both viewpoints together will give you a very good understanding of how Wall Street – and pretty much any market – really works, and how you can either try to beat it or ride with it.

A Random Walk Down Wall Street is the twenty-third of fifty-two books in The Simple Dollar’s series 52 Personal Finance Books in 52 Weeks.