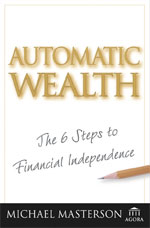 A while back, I read and gave a rather positive review to Michael Masterson’s Automatic Wealth For Grads. I found it to be a very good personal finance and life skills book for people who are within three years or so of college graduation, but the value of the advice decreases greatly if you fall outside of that time frame.

What I didn’t know at the time is that Automatic Wealth For Grads is actually a spin-off of an earlier, more general personal finance book, Automatic Wealth, so when I came across the original book, I knew immediately that I wanted to read it and give it a thorough review.

I found it to have the same engaging mix of personal finance and life skills advice as Automatic Wealth For Grads, quite readable and interesting. But is the advice compelling and unique enough to make Automatic Wealth a read for everyone? Let’s dig in and find out.

Automatic Wealth is broken down into “six steps for financial independence,” as stated on the cover.

Step 1: Recognizing Reality
Masterson says right off that many people delude themselves into thinking that their financial picture is actually more rosy than it actually is, and the result of that is that people often don’t see the financial danger they’re in, nor do they adequately plan for the future.

Several solutions for pulling off the rose-colored glasses are offered here. First of all, one should calculate their net worth, as the raw numbers provide the most accurate picture of where you’re really at, not where you trick yourself into believing you’re at. Next, spend some time

figuring out your “number”, or the exact amount you will need to retire. Given both of these values, you can start to see what you’ll need to do to get from here to there, which means you can begin

defining and working towards some long term goals, whether they be retirement oriented or otherwise.

Step 2: Plan to Become Wealthy
You know where you’re at and you know where you want to be. How do you get there? The key, actually, is in how you set the goals themselves – the more specific your goal, the easier it becomes to get there because it’s easier to pull out small pieces that you can wrap your hands around. In other words, take your

long term goals and break them down into

medium term goals, then break those down into short term goals and microgoals.

Let me give you an example in my own life. I have a long term goal of being debt free. This breaks down into two intermediate term goals: the elimination of my student loans and the elimination of my mortgage. Then, I can break the student loan elimination down into short term goals associated with large chunks of my student loan: eliminating one of them and three instances of eliminating $7,000 worth of the debt – each of those can be done in a year. From here, they become microgoals: I need to pay off $150 in student loan debt each week, and I can get there by trimming fat from my spending by doing things by not buying any lattes this week or resisting the urge to buy a Wii game – in other words, microgoals.

Step 3: Develop Wealthy Habits
A while back, I wrote a very critical review of The Secret in which I stated that “the secret to having everything you want is simply figuring out what you actually want and working to get there.” From that perspective, you can imagine how pleased I was to find that Masterson wholly agrees, and it comes through loud and clear in this chapter with the first subheading shouting in big, bold letters It’s Not About Thinking… It’s About Doing.

The chapter goes on to define eight habits of highly successful wealth builders:

1. They work hard.
2. They are good at what they do.
3. They have multiple streams of income.
4. They live in (relatively) inexpensive homes.
5. Thye are moderate in their spending.
6. They are extraordinary in their saving.
7. They pay themselves first.
8. They count their money.

These are basically the same exact habits outlined in The Millionaire Next Door: you don’t get rich by buying Lexuses and extravagant houses, you get rich by working hard at something you’re good at and not wasting your money. A good chunk of this chapter is actually devoted to frugality, which will perhaps surprise and alienate some readers, but definitely legitimized the book in my eyes, as frugality has been a big part of my financial turnaround.

Step 4: Radically Increase Your Personal Income
Here, Masterson focuses on career advice, stating in no uncertain terms that the only real way to get ahead is to bust your tail, but to make that work pay off you need to make sure that the right important people know about it. One big suggestion he offers is giving regular status reports to people who have power to give you significant raises and promotions, but in those reports focus on the accomplishments of the project as a whole and give most of the credit to the team that helps you do it.

From there, Masterson suggests becoming a consultant (so you can make stronger salary demands and work more independently) and then eventually starting a side business or two, both of which I agree with depending on the exact situation. He does highlight the idea of using real estate investment as a side business, which I’m not strong on, but he recovers with much stronger investment advice in the next chapter.

Step 5: Get Richer While You Sleep
The fifth step revolves around building a

diversified investment portfolio, offering some basic investment advice that’s worth reading through. However, I find that if you’re seriously looking at investing, you’re much better off getting a fuller picture on how to invest from a book like The Bogleheads’ Guide to Investing.

If there’s one flaw in Masterson’s writing (and it’s a flaw that also crops up in Automatic Wealth For Grads), it’s that he’s very much caught up in the absurd returns generated by the housing bubble in 2002 to 2006. Because of that, he strongly encourages people to jump into real estate investing, particularly housing investing, even making some risky moves to get in. Obviously, this was a bit on the aggressive side and is a great example of why it makes more sense to turn to a more well-rounded strategy like the one in the Bogleheads’ book.

Step 6: Retire Early
The last chapter, interestingly, continues the investment theme, but turns much more conservative, looking at how one should invest as they move close to retirement – and into retirement. The investing strategies here are much more sensible than the ones in the previous chapters, but again, it makes more sense to get thorough investing advice from another source.

Automatic Wealth is a very strong food for thought book, and the first four steps make for excellent reading – Masterson excels at showing you how to evaluate your situation and put yourself in the best possible state to really ramp up your income. However, he’s much weaker at dispensing investment advice.

So, for that reason, this is well worth reading for almost anyone, but only for the non-investment advice. For investment advice, I really would look elsewhere to a complementary book, something like The Bogleheads’ Guide to Investing. If you’re looking for strict investment advice or information on how to dig out of debt, this really isn’t the right book for you.