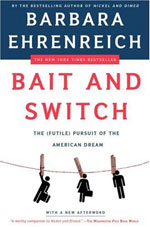 One of my first book reviews on The Simple Dollar was of Barbara Ehrenreich’s Nickel and Dimed. In that book, Ehrenreich took a number of minimum-wage jobs and reflected on the challenges of the work and the difficulty of surviving on such a low income.

My review took Ehrenreich to task. My biggest problem with the book is that she could simply exit that lifestyle any time she chose and by simply “playing poor,” she couldn’t really understand what it was like to be poor. It’s an idea that was perhaps most popularly expressed in the song Common People by the band Pulp: You will never understand / How it feels to live your life / With no meaning or control / And with nowhere left to go / You are amazed that they exist / And they burn so bright / Whilst you can only wonder why

So why would I review another book by her? Frankly, it took me a long time to even choose to pick up another book by Ehrenreich (she’s written several), but I could not deny that, at the very least, Nickel and Dimed was well-written and approached some good ideas, even if I didn’t agree with a large portion of the book.

From the subtitle, one might think that this book would simply paint a negative picture of white collar work as a whole. I don’t think the book really does that at all; in fact, I found there were many good ideas in this book, but that they didn’t come in the expected way.

The general premise of the book is that Ehrenreich is a “professional in transiton” and is seeking out a new career path.

Finding a Coach in the Land of Oz
Ehrenreich opens the book by seeking out a “career coach” – someone who will help her navigate the sea of job postings and opportunities out there. Mostly, it seems that these people mix together a brew of personality testing (think Meyers-Briggs tests) with some cheerleading and a bit of job searching that anyone with a personal computer could do. From Ehrenreich’s description, the biggest thing the coaches bring to the table is enthusiasm and support – they mostly just accentuate what you already have, often for a high price.

Stepping Out into the World of Networking
From there, Ehrenreich attends some “networking” events where she’s meeting people who are, frankly, in the same situation she is in: seeking better employment opportunities. The obvious question here is what the benefit of meeting other people who are desperately looking to switch careers really is. Networking events tend to attract similar people – people who are trying to blaze a different path than the one they’re on. Are these the people you want to attach to?

Surviving Boot Camp
Ehrenreich then attends a career “boot camp” in which people are trained in how to become more effective (and more employable) professionals. Most of this seems to quickly devolve into very generic stuff like one would expect to find in The Secret (absurdly over-the-top “power of positive thinking” material) mixed with some vague notions that career coaching and networking can really help, which were discussed in the previous chapter.

The Transformation
The “transformation” mentioned in the title of this chapter is largely about physical appearance, as yet another consultant (with a bit of a sexist bent) seems to encourage Ehrenreich to focus heavily on her personal appearance in order to improve her career prospects. There’s a bit of sexism at play throughout this chapter, which does give some insight as to the challenges that women can have trying to work in a male-dominated world (that’s thankfully becoming somewhat less male-dominated).

Networking with the Lord
Here, Ehrenrech attends a Christian career event, where most of the ideas stated above are remixed with a Christian theme and often co-sponsored by a church hoping to gain members (apparently). In the end, much of this chapter turns into a discussion of the problems with the “prosperity Gospel,” which I found quite interesting. In short, this chapter gave a distinct impression that many Christian money seminars tend to be trying to merge two contradictory messages.

Aiming Higher
Ehrenreich chooses at this point (with no job success) to inflate her resume with some bogus jobs and other materials, which gets her foot in a few more doors but never really materializes. The one thing that seems to click, though, is a situation in which she gets an opportunity to show off her nascent management skills, taking charge of a team. This seemingly energizes her and attracts a bit of attention, but doesn’t really coalesce into anything. The lesson? Showing your skills to people is a very good thing.

In Which I Am Offered a “Job”
Ehrenreich gives multi-level marketing and network marketing a shot here, moving into areas where she’s essentially an independent salesman as part of a larger hierarchy. What she finds is that she’s dumping far more time and money and energy in than she’ll ever get out of it, despite all of the positive talk and rhetoric.

Downward Mobility
At this point, she starts to lower her job expectations quite a bit. She attends a job fair with no success, then gradually moves down the employment scale until she’s looking at entry level service positions (which are easy to come across, by the way). She muses for a bit on the idea that perhaps people are disappointed with their ability to get jobs because they are overinflating the type of position they should be looking for.

Is Bait and Switch Worth Reading?
This book is not a perfect career guide, nor is it a criticism of capitalism. Instead, it does something else – and does it very well. It shows you what not to do if you’re seeking the American dream.

You shouldn’t try to get a job you’re not really qualified for; instead, build up your own qualifications.

You shouldn’t believe that career coaches and workshops will really put you where you want to go. It comes down to you.

You shouldn’t believe that networking dinners will immediately connect you to the right person. Networking is something you do, not something someone else sets up and does for you.

You should recognize that success often comes with a long climb up a ladder, not an immediate leap to the top.

In short, this book makes a strong case that the people who are rewarded with success in America are the self-reliant and the self-directed. Coaches and such can help, but they only help in that they help mold a bit of what is already there. If you expect others to hand success to you on a silver platter, then, indeed, the American dream is a futile pursuit.

Bait and Switch is a good read that hammers home a vital point, and for that I definitely recommend it for some bedside table reading.