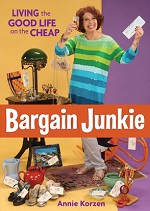 Bargain Junkie is an unabashed frugality book, focusing mostly on maximizing your “bang for the buck” when spending money.

The book itself is broken down into a large number of very short sections covering specific frugality issues, often written in a humorous and often self-deprecating tone that’s pretty appealing.

Obviously, when you read a lot of frugality books, you begin to recognize that some of the central points in each book appear in all the books – which is fine, since there’s a very good chance that this is the first book on frugality that the person has picked up and many of the repeated ideas are the very good ideas that a person should use. Bargain Junkie follows this pattern and spends a significant number of its pages on what I would call Frugality 101, which makes it an equally good “starter” book as many other frugality titles out there.

What sets it apart, though? Instead of doing a section-by-section review of the multitude of short pieces in the book, I picked out ten short sections that really stood out to me.

Television Is A Model For How Not To Live
Instead of looking at how people live on television as something to strive for, use it as a guide for something to avoid. After all, do you want a unique and wonderful life or do you want to just be a pale imitation of that guy in the television commercial? Do you want to live by your own rules, or merely imitate the crass consumerism of The Real Housewives of East Overshoe?

Extended Households
Living quarters are one of the biggest expenses in our lives. Yet, quite often, large portions of our living quarters go completely unused as we often get into the routine of using just a room or two in our home for most of our activities. So why not share that extra space? Consider a more communal living arrangement, where you actually live with friends and family and split the housing cost appropriately. It works surprisingly well and it can save a truckload of money.

Collecting
Collecting can be a worthwhile venture for frugal people provided two things are true. First, you’re quite willing to sell off what you’ve collected. Second, you’re willing to keep up with the hobby and stay abreast of prices and information about it. If you do both of these, you can often find a very lucrative hobby from hitting thrift stores and the like. I actually have a friend who buys and sells vintage video games who claims to have bought games at many thrift stores for fifty cents and resold them for hundreds (think Chase the Chuck Wagon). I’ve even done it myself with trading cards of various types.

Try It Yourself Before Paying an Expert
Home repairs? Try it yourself by reading documentation online and giving it a shot. Exercise? Try home exercise before buying a gym membership and paying a trainer. Virtually everything you do that you hire someone else for can be done yourself. So why not try it and make sure you actually need to shell out the money for someone else to do it? Exercise at home first and make sure you’re willing to keep up some routine before hiring a trainer, for example, and you might find you don’t even need one.

Go Monastic
Why do you have to live the same life everyone else does? If you live cheap and build up a bankroll, there’s no reason you can’t sell everything and live out of your kayak for a couple of years. The only thing keeping you from doing something completely different in your life is your own fears. Most of the big dreams people have are usually really cheap when you get right down to it, so it’s rarely the cost that keeps us from doing something like driving around the country in a solar car talking at public libraries.

Buy Your Own Presents
Quite often, gift-giving occasions come down to giving other people stuff they don’t want and you receiving stuff you don’t want. Why? Sit down and have a heart-to-heart with the person and, instead of just exchanging gifts, pledge to do something fun and unique together that you both want to do. You’ll probably save money and almost always wind up doing something much more memorable, enjoyable, and long lasting.

Craigslist/Freecycle First
Whenever you need anything, it’s usually worth your time to check the local Craigslist or Freecycle before going out and buying it. You can often find great stuff for pennies or for free. Heck, I’m learning how to play the keyboard on a free Craigslist item. Similarly, if you have something you’re getting rid of, put it up on that list with a low price tag. Quite often, it’ll be off your hands without breaking a sweat.

Large City Travel
If you’re traveling to a large city, study the public transportation information for that city online before you go. In many large cities, you can have a wonderful trip there without renting a car or paying for a taxi by simply knowing and using their public transportation system. My wife and I spent a week in London several years ago without renting a car or taking a taxi, even from the airport.

I used to be fairly nervous wearing things bought at thrift stores. “Won’t people look down at these secondhand clothes?” I would think. I’d be more self-conscious and then I’d find that people did think less of me than I would have liked. But it wasn’t because of the clothes – it was because I was so self-conscious, nervous, and shy. The clothes don’t make the person.

Hit Ethnic Restaurants – Hard
This is something I did myself in college and still do on occasion. In terms of the quantity and quality of food you get for the dollar, few places beat ethnic restaurants. Go there, order something intriguing, and you’ll find yourself leaving with a doggy bag containing enough food for two more meals or so. I can’t tell you the number of times I’ve eaten leftover sauteed vegetables over rice where the price of each meal I actually got from the restaurant dish was cut down to the $2 level. I know some professors at my old college who almost exclusively eat (even to the exclusion of home food prep) at local ethnic restaurants.

Is Bargain Junkie Worth Reading?
Bargain Junkie feels very much to me like a collection of posts from a frugality blog with a very good writer and entertaining voice. The sections in the book are quick reads that usually each convey a central point or two or provide a checklist of highly specific tips and are packed with anecdotes that either make you laugh or breed familiarity with the reader.

Annie should start a blog, period. I would happily link to some of those entries and she’d probably end up earning more revenue from it than she would from this book over the long run. If you enjoy reading well-written, occasionally humorous blog post length articles about frugality and maximizing your buying dollar, you will enjoy this book.

My biggest problem with the book, actually, is in the design. To me, the design of the cover is poor to the point that I would have not picked up this book had I not had a vested interest in reviewing it. There are thousands of great books out there to read – I would probably walk on by this book on a bookshelf simply because there are so many other great books that I could be reading that didn’t give me a “go away, this book isn’t for you” vibe right from the cover. Yes, I know the cover was shooting for a certain demographic, but you can reach those people without giving a “go away” vibe to others outside that demographic.

Still, once I got past the cover, the book inside was quite worthwhile – an entertaining survey of frugal ideas.