Every other Sunday, The Simple Dollar reviews a personal development, personal productivity, entrepreneurship, or career book. 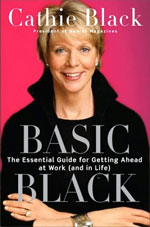 For the first time ever, I’m reviewing a book as a result of an impassioned plea from one specific reader.

Susan, however, is one special reader. She started reading The Simple Dollar in early November 2006, right as the site launched. Since then, I’ve heard from her almost monthly and have used her story for inspiration for several posts over the years. She’s always been encouraging, has offered lots of suggestions, and been incredibly generous a few times (including giving me quite a few credits on PaperBackSwap when I first started).

When she first started writing, Susan was chasing her MBA. When she received her degree, she struggled for quite a while finding a job, then finally found a good place to call home – or at least to start out.

Recently, Susan wrote to me, glowing about how her career was going so far. In that email, she said that reading Basic Black was one of the best things she ever did. An older worker had loaned her the copy and encouraged her to read it and absorb it, so over one long weekend, that’s what Susan did.

She practically begged me to review this book, saying it had a huge impact on her life and her career starting out as a young woman in the business world, and after all the support Susan has given me over the years, I couldn’t help but give Basic Black a read.

Basic BlackCosmopolitan, Esquire, Good Housekeeping, Harper’s Bazaar, and O. She was also involved in the incredibly successful launch of USA Today back in the 1980s. In short, she’s a great example of how a woman can succeed in business – and, at least in the case of Susan, Cathie’s a real role model and someone to look up to.

Does Basic Black offer any strong career advice or does it just faintly mimic other books already on the market? Let’s dig in.

Drive
If you want something, you have to be willing to go after it – or else someone else will pluck that ripe tomato right out of your hand.

Going after something is simple. It means taking care of every significant problem or conflict along the way. It means building lots of relationships with lots of people – get on the phone regularly! It means doing what it takes to come up with a tremendous end result for whatever projects are assigned to you.

It means being tireless and filling every moment you can with achieving your goal (without being unethical, of course). The best way to get ahead is to do the best you and build the most relationships for yourself, not by sabotaging or interfering with others (as that’s detrimental to the whole organization – and thus detrimental to you).

Risk
Many people are very risk-averse with their career. A small group of people are extremely risky with it, often taking enormous chances with themselves, their business, and their industry (hi, Lehman Brothers and Enron!).

Calculated, moderate risk mixed with drive is a powerful medicine for career success.

People
The advice in this section neatly overlaps with the recent discussions on here about the book Never Eat Alone. To put it simply, you’re far better off giving what you know freely and accumulating connections that find you valuable than you are playing social games.

The more people you have a strong relationship with, the more strings you can pull when you actually need them to accomplish a project. You build those relationships by helping those people out when they need it – giving information, offering help, and so on.

Fear
Fear comes from intimidation – a person you don’t think you can handle or a situation you’re uncomfortable with. Quite often, the thing we fear just represents some other fear we have – our own mortality or our own failure.

In other words, most things in the outside world that we fear are instead just issues of self-confidence.

Whenever you’re put into a situation where you feel fear, think about what’s going on for a second. What are you really afraid of here? What’s the worst possible outcome? When you start thinking in those terms, fear begins to melt away. The worst thing that can happen is that the client walks out the door – and that’ll probably happen anyway – so why be afraid?

However, one thing’s for certain: the more you use your power, the less powerful you are.

Power is not an infinite thing. Instead, it shouldn’t be used unless there’s a very good reason for it – and just getting your way is not a good reason. When you reserve your power for key moments, you become substantially more powerful. People pay attention and follow you because they know that you don’t exert your power unless it’s important.

Passion
Some people confuse passion and drive, but they’re different things. Drive makes sure you cover all your bases, while passion ensures that you enjoy the whole process.

Channeling your passions can be a real trick. It requires you to seek those things that you truly enjoy and find ways to channel that enjoyment into your work, creating things that no one else can create.

Make up your mind what result you want for the upcoming situation, then consider what you need to do to make that happen. Keep it front and center in your mind – the desired outcome of the event – and do everything you can to raise the overall tide of the room so that you can accomplish it.

After all, a rising tide lifts all boats, and if you bring a great positive perspective to a situation, it raises everyone’s boats.

Leadership
Leadership simply means being reliable. Whenever there’s a problem or a big decision, the leader is the person that everyone feels comfortable with making that decision or solving that problem. It’s not a title on a placard or anything else – it’s simply taking care of things.

Don’t worry about big long lists of traits that leaders provide. You make yourself a leader by solving problems and coming up with solutions to the big issues of the day. You are a leader when you help bring someone around and engage them in their work. You’re a leader when you volunteer for the tough tasks – and collect the input of others for that task.

You can be a leader every day, whether you have that title or not. The title will come if you’re a leader for long enough.

Is Basic Black Worth Reading?
For someone who is entering into a business career, particularly a young woman, Basic Black is loaded with strong advice and information, written from the perspective of someone who had to fight her way up to the top. In my writeup, I glossed over the specifics – over and over again throughout this book, Black does a great job of offering up very specific advice in the general areas covered, mixing anecdotes and straightforward suggestions in a very heady mix.

Unfortunately, the target audience for this book is pretty narrow. It really applies mostly to people starting out in the business world. Although many pieces of the advice apply elsewhere, readers outside of this situation are better served reading other books on personal growth and career development.