Review: Buffett – The Making of an American Capitalist 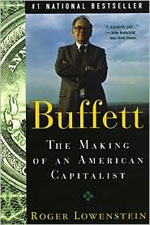 Over the last several weeks, I’ve been reading Roger Lowenstein’s excellent and thorough biography of Warren Buffett. I didn’t pick it up to learn investment secrets – in fact, it’s pretty clear from the get-go that this book isn’t for you if you’re looking for specific investment tips. Instead, I picked it up to try to get a reasonably unbiased measure of the man, and that’s exactly what I got.

Buffett – The Making of an American Capitalist tells in a leisurely fashion the life story of Warren Buffett, perhaps the most well-known investor of the modern era. Instead of focusing on the exact financial moves and techniques, it focuses on capturing a picture of the man himself. What kind of person finds such success in investing? That’s what Lowenstein seeks – and that’s what I want to know as well.

A Deeper Look at Buffett – The Making of an American Capitalist

I could attempt a weak rewrite of the book, summarizing some of the highlights of Buffett’s life, but you could get that same information from Buffett’s Wikipedia entry. Instead, I thought I would just give a handful of general reflections from the book, particularly in terms of how they relate to my personal finances (after all, this is a personal finance site).

Intensity wins. The one overarching theme from this book is intensity, at least from my reading. Buffett seems to keep his eyes on the prize all of the time, even in his early childhood. The only times he seems to stumble is when he takes his eye off the ball.

Never stop learning. Along those same lines, Buffett seems to constantly be learning as well, in terms of study, street smarts, and investigation. He learns from success and from failure, and the progression of this knowledge and wisdom is apparent throughout the book. It’s pretty clear early on that he’s intelligent but not wise – only after many years of learning does he seem wise.

Don’t buy more than you need. Buffett’s frugality is well known, but what’s fascinating is how that frugality drifts over into his investing. In no aspect of his life does he spend a dime without clear purpose. He lives in what I’d call an upper middle class home because he sees no reason to live in anything else. Similarly, he passed up (over and over again, actually) seemingly good investments simply because he didn’t see the reason to make the leap. It’s pretty obvious, then, that Buffett follows his principles adamantly, especially later on in his career.

Similarly, look at the actual value of what you have. When Buffett bought Berkshire Hathaway, it was a textile company that was seriously on the decline. In fact, it was so disrespected that Buffett was able to buy the company for less than the value of its assets. A lot of people thought this huge investment was foolish, but Buffett began selling off those assets and using Berkshire Hathaway as a holding company, buying other companies. A lot of people saw a disaster – Buffett saw a bargain.

This is a brilliant principle to apply in all avenues of life, and it is one that inevitably points towards frugal living. If you question what exactly you’re buying all the time, you tend to buy less stuff – and have more money for the important things.

In the end, this book actually does explain, in an indirect way, “how to win the Warren Buffett way.” It’s not a matter of following rules or stealthily following investment tips. It’s about figuring out and understanding who you are, understanding cold the principles that you live your life on, and using them to invest. It’s about the value of being honest – and the value of being yourself. It’s also about the value of seeing the different kinds of value that something holds. All of this sounds really eye-rollingly simple, but yet it’s so hard to actually execute, because one can really only reach that level after years of introspection and learning.

Who would have ever thought that, in the end, the story of Warren Buffett would have a lot in common with Zen and the Art of Motorcycle Maintenance?

Let’s get this straight right off the bat: this is not a book of investment advice. If you’re looking for a book on investing according to Buffett’s principles, look elsewhere – I recommend starting with a good book on the principles of value investing, like The Intelligent Investor (which I will get around to reviewing at some point).

Instead, this book belongs solidly in the biography section. This is a portrait of a person, and like any person, there are a lot of interesting facets and features. There are amazing strokes of genius, and there are flaws as well. A good biography takes a one dimensional image that we all know (Warren Buffett, investor extraordinaire) and fills him out as a three dimensional person, a person with love, with passion, with sadness, with high points and low points, with character and vitality.

Buffett – The Making of an American Capitalist is a very good biography. Buffett is a highly compelling subject, and with Lowenstein’s skill, it’s easily the best biography I’ve read of a modern investor, and it’s one of the rare books that I will keep and read again. If you have any interest in who Warren Buffett is as a person, pick this up and read it – it’s well worth the time.