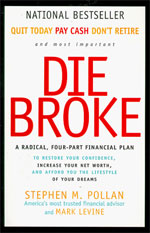 Die Broke caused a pretty big splash when it was first printed several years ago, mostly because it turned conventional wisdom on its ear so deftly, and books that do that and do it well usually end up meriting quite a bit of discussion.

Die Broke made a name for itself by painting a very clear picture of a personal finance philosophy that seemed rather alien at the time of its printing. It proposes that you shouldn’t focus your life on saving for retirement because, if you use all of the rewards that life gives you, you should, as the title says, “die broke.” In other words, having a large estate at the end of your life merely means you didn’t enjoy all of the rewards that life has for you.

The book centers around a four part plan, summed up roughly as follows:

Quit Today This doesn’t mean to terminate your current employment – it merely means to focus on your own personal bottom line as the top priority in your workplace. Focus on things that build up your value as well as the company rather than slaving for things that won’t help your career at all.

Pay Cash Dave Ramsey fans will like this bit – basically, you should never go into debt for anything (except perhaps your home) and pay cash for everything. Until you actually own something – literally hold the deed for it – you don’t truly own it because a few missed payments means they come and take it away and you have nothing. Instead, wait on purchases until you can literally pay cash for things.

Don’t Retire Do you really expect that at age sixty five, all of a sudden you’ll push back from your desk and do nothing for twenty years? You’ll be bored out of your mind. Instead, figure that you’ll be doing something productive until the day you die and likely you’ll be earning some income from it.

Die Broke This doesn’t mean that you shouldn’t invest, but your investment goals shouldn’t be a nebulous retirement – they should be tangible things like an automobile or a house or your oldest granddaughter’s down payment. The worst result of all is passing on a big estate – you’ll never get to enjoy spending all that money or giving it yourself to the ones you love and seeing their reaction.

It’s an exciting philosophy, but does it pan out? Let’s dig in.

A Stroll Through Die Broke

Die Broke is divided into two sections. The first one is the actual meat of the book, laying out in detail the plan described above. The second part of the book, which I won’t even bother to cover in detail, is basically a primer on very basic personal finance; it’s somewhat dated and in most places too light on concept to really have much true meaning at all. The real reason to read this book is the first section, so I’ll talk about that one.

Chapter 1: Immigrants in the New Age
The book opens with a chapter that argues that the traditional ideas of personal finance, that of saving for retirement, retiring, and then leaving behind some money for the family after your passing, is rooted in the culture of the early twentieth century immigrants to the United States. The authors use the example of the New Deal, which created Social Security to get old people out of the work force so younger people could find work, as an example of where the modern concept of “sixty five, gold watch, and retirement” came from.

It is this mythology that the book is aiming to knock down with a sledgehammer.

Chapter 2: Quit Today
We now live in an era where corporate profits are at all-time highs without real wage increases for most of the people actually doing the work, jobs are being sent overseas, and the average office worker can no longer feel the security of a steady job. What does this mean for the average worker outside of that inner corporate circle? The idea of being loyal to the company because the company will be loyal to you no longer holds any water.

Instead, one should “quit” their current job where it is the employer that you’re responsible to. Instead, keep going into work, but realize that you’re the one you’re responsible to. Do your work, go home, and don’t sweat it. Focus on opportunities that allow you to build value in yourself and don’t feel guilty about it, because some of that will inevitably spill over at work. Don’t kill yourself to rise up the corporate ladder in an organization that would be just fine hatcheting your job whether you’re a low man on the totem pole or near the top – instead, always focus on building your own value and don’t burn yourself out.

Chapter 3: Pay Cash
This chapter is straight out of Dave Ramsey’s philosphy. In a nutshell, don’t buy anything (except arguably a house) unless you can pay cash for it, period. Doing anything else means you’re spending significant amounts of extra money to have it now instead of just waiting a bit – effectively, it’s an impatience fee, and it’s a really steep one most of the time.

This is the one aspect of the book I’ve really taken to heart, almost to the point that my wife feels that it’s weird. I have informed her that I intend on paying cash for all future automobiles; upon that announcement, she looked at me quite strangely.

Chapter 4: Don’t Retire
This book isn’t saying that you shouldn’t enjoy your golden years, but realize that you will be spending most of those golden years yearning to do something, so why not do something you enjoy that also earns money? Hint: that’s what work should be. With that philosophy, you can basically “retire” whenever you want if you’d rather see it that way.

This doesn’t mean you shouldn’t take advantage of a 401(k). Use it as a savings account for something big when you’re old enough to withdraw from it – maybe it will be buying an amazing house or something like that. In fact, I actually know one person who is funding a Roth IRA faithfully each year. He plans on emptying the whole thing out on his 60th birthday and starting a winery with that as seed money. That’s the epitome of the “die broke” philosophy.

Chapter 5: Die Broke
This is the nightcap of the whole plan: instead of leaving a big inheritance, you should plan to die as broke as possible. How? Use all of that money you’ve been saving in your 401(k) and buy an annuity that will fund you for the rest of your life, take out some good health insurance, and then just blow everything else. Start a winery. Go on trips. Write a check for your granddaughter’s down payment. Build a ninety foot tall statue of Jesus in your backyard. Basically, enjoy spending the money you spent your life earning.

But what about your children? You don’t have to leave them out if you don’t want to. Show up at their door with the deed to their home because you’ve paid the whole thing off. Buy your oldest son the BMW he’s always dreamed about. Send your extremely bright grandson to MIT. The point is that you can do whatever you want and actually enjoy it when you’re alive.

Chapter 6: Choosing Your Own Clothes
One of the big advantages of this philosophy is that it gives quite a bit of peace of mind. If you’re no longer tied up in the race to the top of the corporate hierarchy, it suddenly becomes much easier to actually live your life and be fulfilled with the things that bring meaning to you.

The “choose your own clothes” title of the chapter is just one example of that. Suddenly, you no longer have to “dress for success” if you don’t want to. Instead, you are free to find your own paths to success, and that might involve flannel and blue jeans.

Chapter 7: Helping Your Parents to Die Broke
Many parents are afraid that they will run out of money at the end of their lives, either by their own actions or by the government. Plus, they’d often like to see some of that money stay around long enough to help out their children. The “Die Broke” plan basically takes care of this idea, provided that they have some capital to work with.

The goal is to put them in a financial situation where Medicare can provide for their medical needs, so they suggest that they buy an annuity that guarantees them an income that’s below the Medicare qualification line, then spend the remainder as they see fit as gifts (the inheritance, basically) or for buying assets that don’t affect Medicare calculations. Once that’s done, they’re set to live out their life as they see fit.

Chapter 8: Helping Your Children to Die Broke
Die Broke subscribes to a similar parenting philosophy as I do when it comes to money. Teach them how money works all the way along by letting them manage it for themselves. Also, the book recommends allowing children of teenage years to sit in on family budget meetings, and also encourage them to get a part time job when they get old enough.

What about college? Basically, the book advises that the child should make sure college is right for them, and if they decide that they wish to go, allocate 6% of your income towards helping them, since that’s what the basis of their financial aid package will be anyway.

Chapter 9: The Die Broke Plan
The “Die Broke Plan” is merely a codification of the ideas in the previous eight chapters into something of a step-by-step plan for life, but it is really rather redundant if you were paying attention along the way. Some of the specific advice here is a bit dated and suspect (with savings accounts paying over 5%, why would you use laddered CDs for an emergency fund?), but the overall logic makes quite a bit of sense.

This book presents a very interesting philosophy on how to manage your finances throughout your life. Mostly, it’s all about investing in yourself above all, from focusing on your own career during your working years to spending your assets during your late years. It’s your hard-earned money, so you should enjoy it.

However, as intriguing as the philosophy is, don’t take this book as a “how-to” bible. Some of the specific advice is rather dated, and the second half of the book is nothing but specific advice – I didn’t even bother to review it in detail because it’s just another dated personal finance “reference.”

Die Broke is the thirty-first of fifty-two books in The Simple Dollar’s series 52 Personal Finance Books in 52 Weeks.