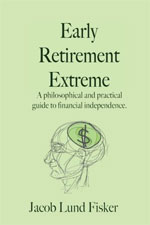 It was the subtitle of Jacob Lund Fisker’s Early Retirement Extreme that convinced me to pick it up. “A philosophical and practical guide to financial independence.” Intriguing enough for my eyeballs, particularly since the subject matter of the book seemed to be in line with my own experiences on what it takes to be financially independent, as revealed from the text on the back cover (which explains the book so well, I’ll just quote it here):

This book provides a robust strategy that makes it possible to stop working for money in less than a decade. It provides a shift in economic perspective from consuming to producting. Your value to society is not how much you earn or buy, but what you create and produce. Consumers are often forced to buy expensive solutions, but producers have the flexibility to create their own solutions at a quarter of the cost. The resulting savings are invested to cover the remaining expenses, resulting in financial independence.

The strategy can also be used to pay off debt, travel the world, volunteer, go back to school, or simply work without worrying about the next paycheck. It offers a compelling alternative to the default choice of getting a college degree, buying a house, filling the closets with stuff, and then spending the next 40 years paying it off.

In other words, if you focus every action – or as many actions as possible – in your life on producing rather than consuming, you’re going to set yourself up for lasting financial success.

It’s a very interesting perspective to have on personal finance as a whole, one that goes hand in hand with voluntary simplicity and frugality. Let’s dig in to see what else Fisker has to say.

A different frame of mind
Most people look at problems in their lives today and come up with a solution that usually involves buying a product. You want to barbecue? Go buy a grill and a propane cylinder instead of building a fire pit and bartering for wood. You want to move heavy items? Go buy a cart rather than focusing on improving your personal health and strength.

Fisker’s general philosophy is that, at every possible opportunity, you should focus on solving the problems life throws at you yourself, with minimal purchases to solve those problems. In doing this, you build a set of skills and attributes that enable you to solve even more problems in your life. If you build a fire pit and start using it, you learn about open-fire cooking techniques. If you get stronger to move a heavy item, you’re more capable of doing things like changing a car tire.

Hand in hand with that is reinvesting the money you’re saving by doing things yourself. If you’ve not bought a grill and you’ve not purchased a cart, then you can take that money and save it. You’re not paying the plumber or the electrician, either. You’re not buying prepackaged foods or take-out. You’re not buying gadgets or consumable entertainment. That money all goes towards making yourself independent from work.

It’s a path that’s not for everyone, of course.

The lock-in
Most of us spend the first big part of our lives – childhood and early adulthood – acquiring a set of skills that do not lead to that kind of self-reliant life. We’re trained from a very early age to be consumers. We buy things to solve our problems. We learn skills that make us more effective consumers. We go to college – and usually go way in debt for the privilege – just so we can learn a skill set for a very narrow career path. We buy a house, a car, and countless other things that weight us down with debt and upkeep payments.

And we’re stuck. We don’t have the skill set to approach life any differently. We’re locked in, and to break that lock is extremely difficult and requires adopting some lifestyle elements that are going to be substantially different than the elements of the lives of people around us.

Economic degrees of freedom
The best state for anyone to be in during any economic environment is to be what Fisker refers to as a “Renaissance man,” an individual who is skilled in many different areas and is capable of maintaining many different avenues of income. Few people fall into this category in terms of their personal skill set – they’re either committed to one skill set or committed to one particular method of earning income (like their job).

A “Renaissance man,” in other words, has many degrees of economic freedom. They can switch jobs or career paths easily and have the skills to succeed in many different areas. In order to be such a Renaissance man, though, a person has to make a consistent commitment to actions that either produce value or directly improve the individual’s ability to produce value.

The Renaissance ideal
The Renaissance ideal is a life spent building skills or producing value, with as little consumption as possible. Such a lifestyle has benefits in many different directions, from the financial to the ecological, and Fisker covers those.

Fisker also examines what it takes to become highly skilled at specific tasks, using a “10,000 hour” metric for strong mastery of an area. Naturally, few people become that specialized, so Fisker encourages people to evaluate how they’re building skills. In other words, you shouldn’t just repeat the same thing over and over and expect it to build skills. Drills are incredibly useful, but if you just do the same drill over and over, it’s difficult to grow.

Strategy, tactics, and guiding principles
There are no such things as needs and wants beyond things like sleep and very basic nutritional intake. That’s a pretty strong statement to make, but Fisker does a great job of spelling this idea out.

Let’s say you’re looking at your needs and your wants with regard to housing. You actually have a lot of options in that regard: sleeping under the stars, sleeping under a piece of canvas, couch surfing with friends, renting a tiny room, and so on. We often limit our options without even thinking about it.

What you have there isn’t needs or wants. What you have is a list of options to choose from. When you immediately start eliminating options, you tie yourself tighter and tighter to a certain type of lifestyle that, by its very nature, excludes many types of financial and personal freedoms that you may otherwise desire.

Much of it, however, is spent breaking down specific ideas that people have built in their heads about what’s “required” for modern life and what’s “normal.” If you step back from the elements of your day to day life and look at the true breadth of choices before you, you can actually make some very radical shifts in your life if you so choose.

For me, there are a ton of great ideas in this section. Some of them are quite workable, while others aren’t as workable.

Foundations of economics and finance
The book closes with a brief look at economics, almost as an appendix to the principles in the book. There’s not much new ground here if you’re familiar with Economics 101.

Is Early Retirement Extreme Worth Reading?
This is a book that tackles a completely different approach to personal finance and modern living than almost every other personal finance book. If you’re merely looking for help on investment choices or want someone to hold your hand while you create your first budget, this book won’t be of any use to you.

However, if you’re interested in some intriguing thinking about modern personal finance, self-reliance, and entrepreneurship, Early Retirement Extreme is a fascinating book. It’s absolutely loaded with thought-provoking ideas. If you’re not left with some food for thought after reading just a few pages of this book, then you’re not actively thinking about your financial state as a whole.

For me, this was one of the most compelling personal finance reads I’ve enjoyed in a very long time. While I don’t wholly subscribe to Fisker’s ideas, there were so many thought-provoking points in this book that I’ll have food for thought for years. In fact, I wouldn’t be surprised if many posts on The Simple Dollar in the near future eventually trace back to this book as a genesis point, where my mind has taken some little thread from this book and run with it for a while.

Check out additional reviews and notes of Early Retirement Extreme on Amazon.com.