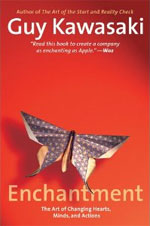 One of the biggest perks (for me) of writing The Simple Dollar is that sometimes, when I’m interested in reading an upcoming book that’s potentially connected to The Simple Dollar’s topics, I can write to the publisher and request a review copy – and sometimes, they’ll send me one. This, of course, leads me to regularly browsing the “coming soon” sections on Amazon for books to request from publishers or to reserve at the library if I don’t hear a response.

I don’t always review everything that I request, though. Some of them turn out to be pretty awful – they don’t say anything new or don’t present the information in an interesting way that might click with someone, for example. Other times, the book turns out to be too far away from what I write about on The Simple Dollar.

This book, Enchantment by Guy Kawasaki, seemed to fall into the latter group at first. The book’s focus is on “the art of changing hearts, minds, and actions,” so I was mostly interested in reading it for ways to improve my own writing here in order to make some of my arguments and ideas more compelling to you, the reader.

What I found, though, is that the ideas in the book spread much further than that. The ideas here work on everything from retail transactions to job interviews to building new friendships at a community meeting. It’s about convincing people in a positive way.

Since I regularly talk about negotiation and bartering on The Simple Dollar, it turns out there actually is a lot of worthwhile ideas in Enchantment.

1. Why Enchantment?
Kawasaki loads up the first chapter with several examples of enchantment, but mostly they come down to treating people in a positive fashion, often in such a way that it takes them off their game. Your goal isn’t to get people to do what you want, but to make them happy – and perhaps you will be rewarded for that happiness.

2. How to Achieve Likability
The first piece in the puzzle is to be likable. If the other person does not like you, they cannot be enchanted by what you have to show them. Smile genuinely (by thinking pleasant thoughts). Dress appropriately and cleanly (not overdressed, not underdressed). Don’t impose your values. Find shared passions. This is basic “How to Win Friends and Influence People” stuff, but it works.

3. How to Achieve Trustworthiness
If they like you, how can they trust you? That’s the next step. The easiest way to do that is to simply be the best possible person you can be – honest in all of your dealings and always putting your best foot forward. Doing that all the time eventually builds a strong positive reputation, one that will often precede you in your dealings with others. If you meet someone that knows of you based on the positive words of others, you’re already most of the way to trustworthiness.

4. How to Prepare
Enchanting others takes preparation. The easiest way to do that, of course, is to create something great that basically does the hard work for you, but we’re often not in that position. In that case, Kawasaki offers a lot of tactics. Perhaps the most effective (in my experience) is to do a pre-mortem, where you think about how you want the exchange to go and try hard to visualize some of the problems you may encounter so you can be ready to easily handle them if they come about. What will you do if someone says no? If you don’t have an answer, you’re going to have a hard time enchanting someone.

5. How to Launch
The key to this for me is always to tell a story, preferably one that the person can relate to. Within that story, I try to make sure to plant lots of “seeds,” which are basically connections to the situation at hand so I can tie that story right to whatever I’m wanting to achieve. If the story is entertaining and compelling enough, I’ve usually hooked the person right then and there, which makes making a deal that much easier.

6. How to Overcome Resistance
Not everyone is going to be immediately bowled over by your great idea. Kawasaki offers a ton of ideas for handling that in this chapter. For me, the key one is finding a label. A label? In essence, it’s a way to put you and the other person in the same boat through a common label. One thing I’ve actually done several times recently is to point to something very local that will strike a chord with them and make them smile, labeling us both as Iowans. It’s something very effective that we inadvertently do all the time, but at the right moment it can make all the difference.

7. How to Make Enchantment Endure
How do you keep people hooked once they’re in? For me, the keys are to make things consistent and make things easy to spread. This is the reason that successful blogs tend to work. They’re consistent – they post on a pretty regular schedule and you can reliably find new stuff when you visit that’s reasonably in line with what you expect. On top of that, they’re easy to spread – you can easily share links with your friends or on Twitter.

8. How to Use Push Technology
This chapter and the next talk about how to enchant people online. Kawasaki does this by separating online technologies into two separate groups – “push” technologies, like Twitter, and “pull” technologies, like blogs. “Push” technologies are ones where you “push” some element into the stream someone’s already looking at, like Twitter. How do you do that? First, you have to get them to follow you, and that’s done by putting your best foot forward, conversing with people, and having interesting things to say. From there, you have to continually present compelling things so that they’re interested in you.

9. How to Use Pull Technology
On the flip side, “pull” technologies require people to leave the normal things they look at – like Twitter and Facebook – and come to you (things you’ve done elsewhere, like your blog). You can do this in a lot of ways, the most obvious being linking to your “pull” things in your “push” feeds (like linking to your site on Twitter). The challenge can be balancing that with being interesting, because if you do it too much, you become merely a self-promoter.

10. How to Enchant Your Employees
What if you’re an employer? How do you enchant your employees? One big step is to never ask them to do what you yourself wouldn’t do – and it doesn’t hurt to show that sometimes. The best boss I ever worked for once told a janitor to go home a half an hour early because he was worried about his mother. That boss then picked up the broom and finished the janitor’s daily sweeping for him. How could you not want to work hard for a leader like that? It only took him half an hour, but the word of it built up so much rapport that it was worth weeks of effort for him.

11. How to Enchant Your Boss
The key for enchanting your boss, in my experience, seems to be underpromising and overdelivering. If you promise a dry two page report and deliver five slick pages with pictures and compelling writing, you’ll enchant your boss. Another great tactic that Kawasaki mentions is to deliver any bad news you have as soon as you’re aware of it rather than later on when it can constitute a major crisis. Don’t be afraid to be the bearer of bad news as long as you do it as quickly as possible.

12. How to Resist Enchantment
This chapter, to me, was the cincher that convinced me to review this book here on The Simple Dollar. We constantly have these types of enchantment techniques worked on us. How do we resist? The best tactic is to set a goal before interacting with the people and things between us and that goal. Keep that goal in mind and head for that goal above all else. Do your research beforehand so that you know facts, not what the others are presenting to you.

Is Enchantment Worth Reading?
In this review, I only scratched the surface of what’s discussed in each chapter. Suffice it to say, the core idea of the book is very strong and the presentation of ideas to make it work is equally strong. If you’re in a position where you find it difficult to communicate with people or persuade them of what you want, then this is going to be a valuable read.

For some people, the stuff in this book will seem elementary. That’s generally because they have a great skillset for negotiation and communication for others. For the rest of us, there are lots of ideas in this book that can help. I actually used a few of them as I was reading, stopping my reading just to take care of a little tactic.

Check out additional reviews and notes of Enchantment on Amazon.com.