Every other Sunday, The Simple Dollar reviews a personal development, personal productivity, or career book. 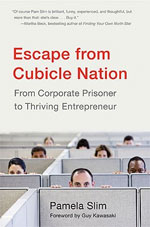 Several months ago, I wandered upon Pamela Slim’s excellent blog, Escape from Cubicle Nation. In a nutshell, the blog covers the transition from working in a cubicle (i.e., a traditional job) to self-employment – and all of the issues in between.

Slim packaged up many of the best ideas into a guide to this transition, also titled Escape from Cubicle Nation. And, since I enjoyed the blog so much, I picked up the book, looking forward to reading what Slim had to say, especially since this is a journey I’ve gone through over the last couple of years.

Here’s the entire thing in a nutshell: if you’re thinking of quitting your office job and doing something on your own, this is your handbook. It’s thorough, detailed, and heavy on the applicable ideas. Let’s dig in.

I Have a Fancy Title, Steady Paycheck, and Good Benefits. Why Am I So Miserable?
Many jobs involve sacrificing one’s core values – you might not necessarily be doing work that you dislike or object to, but the work isn’t in line with what you want out of life. Many jobs are also filled with trifling details that are simply not fulfilling. Work also often involves jumping through hoops for a boss – a process that isn’t clear on how it helps you (or helps anyone). Adding these factors together, it’s not entirely surprising that people are unhappy with their work, even if it’s a “good” job.

If It Is So Bad, Then Why Am I Afraid to Leave?
Slim points toward status, routine, and recognition as big factors, but I think an even bigger factor is a fear of the financial unknown. Many, many people are out there living paycheck to paycheck, deeply fearing the idea that the job might go away. I know that this was my biggest roadblock against taking the leap into being a self-employed writer – I was afraid that the steady money would go away. Security was my biggest fear and it held me in place for a long time.

Detox from Corporate Life
Slim offers six steps that can help a person “detox” from corporate life – in other words, the steps a person should take to reduce and eliminate some of the mental holds that their job puts on their mind. Clear your plate of as many tasks as you can (leaving you some breathing space in your day). Start writing down and tracking your ideas. Get creative and expose yourself to new ideas.

What’s Really Involved in Moving from Employee to Entrepreneur?
This chapter outlines a step-by-step process for making that leap. It’s not a be-all end-all guide, but instead it just outlines a framework that the rest of the book fills in in detail. I think her framework might be too specific – what I’ve found is that often people try out lots of different things, something takes off, and they hop onto the rocket ship. Thus, it’s often useful to look at some of the prep as generally useful – like getting your finances in order – but some of the others are a bit more specific than might be necessary. Instead, just try to seek out your own rocket ship – and the way to do that is to follow your passions.

What Are All the Ways to Be Self-Employed?
It’s really impossible to make such a list, so what Slim does instead is to break it down into a big handful of different factors worth considering. What will you do? Why will you do it? Who will consume it? How will they pay? Who will you do it with? Those factors are very different in different self-employment and entrepreneurship positions.

How Do I Choose a Good Business Idea?
After that chapter, a person’s mind might be loaded down with ideas. How do you choose the right one? Slim argues that a person benefits from figuring out their sweet spot – the point where your talents (what you’re genetically encoded to do), your passions (what you love to do), and what’s marketable (what people will pay you to do) intersect. You can even do it by making a list for each of these three categories and figure out where they overlap. Once you start getting a vague sense of where you’re going, start doing research. What’s possible in that area?

Recruit Your Tribe
The next step to success is to surround yourself with the right people – peers who are doing similar things and mentors who have already found success. Slim addresses how to do this in detail, encouraging you largely to just go where the conversation is, join in, and listen. People are already out there talking about your area and it’s worth your while to start participating, building relationships, and growing.

Rethink Your Life: Options for Scaling Back, Downsizing, and Relocating
What? Frugality? Minimizing your stuff? That’s for losers, right? Actually, frugality is for winners. It’s much, much easier to take a challenging leap if you’ve got a healthy bank account and don’t have a pile of bills coming in every week. If you want to give self-employment a try, minimize. Save some money. Get rid of as many bills as you can. Learn how to live a little leaner. It’s really a choice: do what makes you happy all the time or have stuff that makes you happy during the hours you’re not working.

Do I Really Have to Do a Business Plan?
Many people look at a business plan as some sort of dry, formal step – a pointless document that doesn’t really help anyone and is best avoided. In truth, a business plan’s purpose is simply to guide you through the thought process of making sure all of your bases are covered. Have you thought about your customers? Have you thought about likely what-ifs? A business plan is just a way to push you to think about these vital questions. So, don’t worry about the formality of your document at the end – but think a lot about the questions involved.

Define the Spirit of Your Brand
What are you going to do to stand out from the pack? What’s different about your business, particularly in a field full of competitors? That’s a difficult question for a lot of people. You cannot find success by just copying something that’s already successful. At most, you’ll be mediocre. What did I do different to build The Simple Dollar? I decided not to be snarky or wholly fact-based, but instead to be earnest, something that wasn’t really done in a blog form too much at that point.

Test Often and Fail Fast: The Art of Prototypes and Samples
Once you have your idea in place, try it. Don’t spend lots of time making it perfect before trying it. Instead, throw it out there, share it, get some feedback, and use it to improve. That’s what I’m doing with my podcast. The first few episodes weren’t all that good, but if I hadn’t shared them anyway, the later episodes wouldn’t have improved at all. I wouldn’t have had a good idea of what was wrong.

Look Your Finances in the Eye
What about the money? It’s all about the money, in the end. You need to get a real grip on your financial state – and that means real numbers. Know what you owe. Know what your bills are. Know what you bring in now. Then plan ahead – get rid of those debts as soon as you can, minimize your bills, improve your credit rating, and build a big fat emergency fund. This is all personal finance 101, but it’s worthwhile stuff.

How to Shop for Benefits
The biggest fear when it comes to self-employment for many folks is health insurance. What will I do without employer health insurance? Slim covers options for people in the United States here, but in the end, this area changes so much that you should do your own research. I think the real solution over the long run will probably be a national health care plan – if this is easily accessible and actually decent, people will sign up in droves and take the leap, I think.

Dealing with Your Friends and Family
Many people find a lot of resistance in their lives if they suggest making a major change in their career. Why? In the end, most people resist change in their lives, and your major career change is often a change in the lives of people around you – a change they’ll resist. I was lucky when I made my change that I had a lot of supportive people around me who knew I’d dreamed of spending more time with my kids and writing for a living for a long time, but this isn’t always true of everyone. What can you do? Listen to their concerns, but realize that many of the doubts expressed are actually their own doubts, not yours. Accompany those doubts with a well-thought-out business plan that analyzes those doubts and ensures that you’ll survive them.

Line Your Ducks in a Row
For Slim, this means getting appropriate support around you. A lawyer you trust. An accountant. Possibly a virtual assistant to help with the flood of emails and contacts you’ll get. You’ll face a lot of problems, and having support around you for the less important things lets you focus on the most important things – like how to overcome the problems that are set out in front of you.

When Is It Time to Leave?
Escape from Cubicle Nation winds down by asking the big question: when is it time to make the leap? Sure, there are logistical issues – do you have the money? Do you have the connections in place? Is the business plan ready to go? Have you already started (and is it successful)? But a big part of it comes from inside as well. It’s a major leap – are you mentally ready for it?

Is Escape from Cubicle Nation Worth Reading?
If you’re working in a typical job (employed by someone else) and have ever thought of going it alone or starting a small business, Escape from Cubicle Nation is an essential read. Slim goes through the factors worth considering in great detail, outlining the things that need to be considered and the things that need to be put in place.

My only complaint – and this is a minor one – is that the topics felt a little bit out of order. This is something I’ve been struggling with while writing my own book lately – are the topics really in the best order? I even sat down and tried to figure out how I would change it, but without blowing most of the chapters to bits and reconstructing them out of pieces, I don’t know what I would change. I think the problem is that Slim tackles so many ideas in the book – but is that really a problem?

Look at your own life. If this book matches the journey you’re on, it’s a must read.