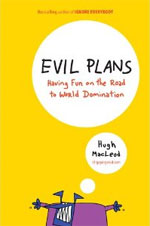 Evil Plans, by Hugh “Gaping Void” MacLeod, focuses on the desire that everyone has to do something that they love that actually matters to the world and how to move from wherever you’re at to that new position.

Take me, for example. I spent most of my early life dreaming of being able to write something that mattered to a wide audience, something that might convince at least a few of them to make some sort of positive change in their life. I spent a good decade of my life trying to achieve it, but building the skills I needed and finding the right situation were all part of what I needed to do to get there. I didn’t give up, and once the glimmer of an opportunity presented itself, I jumped on board with gusto.

I didn’t follow the ideal path to get here. In fact, I followed a pretty poor path. What got me here was never abandoning my goal and continually working towards what I wanted.

An “evil plan” is MacLeod’s tongue-in-cheek way of describing that path. It’s the path that leads you from wherever you’re at right now to doing something that you love that really matters.

The book is divided up into a few dozen very short chapters, so it’s difficult to give this book a chapter-by-chapter review. Instead, I just picked out a half-dozen of the chapters that really had an impact on me as I was reading it, to give you some of the flavor of what’s found in the book.

If you really want to make your “evil plan” work, you’re going to have to commit a lot of your energy, thought, and time to making it happen. Even before The Simple Dollar launched, for example, I was still writing quite a lot almost every day, either by writing short stories, novels, essays, posts for other blogs, or other things like that. This time was spent in addition to my normal workday, my social commitments, time with my family and my wife, and so on. I didn’t just go home and sit and watch Everybody Loves Raymond. When I launched The Simple Dollar, it got even worse.

I was overextended in terms of my time – and I still am. Not a day goes by where I don’t have to choose between multiple things I would love to be working on. You should see my list of “someday/maybe” projects.

I love it, though. Why? Because I’m choosing among things I’d be happy doing. I’d be thrilled to write another book, launch another website, start a newspaper column, and countless other things that I could be doing. The idea that I get to get up in the morning and choose among a lot of things is wonderful, and I’m overextended mostly because there’s so many I want to be doing, not because there’s too much shoveled on my plate by someone else.

Make Art Every Day
By art, MacLeod doesn’t mean paintings or music. He means whatever it is that is most meaningful and powerful for you.

I know a guy who goes home each day, watches basketball games on mute, and does the play-by-play himself, just sitting there on his couch. He records them, then listens to the play-by-play and figures out what’s wrong with it (and what’s right), then uses that for the next go-round.

Why is he doing this? He’s going to eventually start releasing some of his calls to the internet (once he feels his skills are good enough) and then attempt to get work doing what he loves to do – describing basketball.

Do you do what you love every day?

Create “Social”
If you want your dream to succeed, it has to be easy to share with others. The internet actually makes this easy. If you’re passionate about what you’re doing, just write a blog about it. Tell stories about why you’re enjoying it. Mention your business/charity/whatever on the sidebar.

MacLeod shares several great examples of how this very thing works for almost any kind of enterprise. The key isn’t great writing skills or anything like that – it’s passion about the topic and a willingness to share and explain.

I have a close friend who works for a charity where she has interesting experiences every day. She tweets about them. I think she’d create a wonderful thing if she turned that into a blog that simply said where she worked and how to donate to help them out.

Avoid Dinosaurspeak
“The Simple Dollar is a great website to get your daily fix of all things personal finance! It’s filled to the brim with heartwarming (and often hilarious) anecdotes from Trent’s life as well as insightful commentary on the world of money management. Every day, countless people visit the site as part of their daily routine so they can get better connected with their money. Want that connection, too? Visit thesimpledollar.com or add The Simple Dollar to your RSS feed today!”

Yes, I can make The Simple Dollar sound absolutely awful. Yet, every day, I read many, many blurbs that come off a lot like that. They try so hard to be “user-friendly” that they fail to convey any real meaning at all and end up being a turn-off.

Avoid it like the plague. Don’t try to be someone else. Be yourself. Trust me, being yourself is more than good enough, because you’re interesting. Dinosaur-speak is not.

What Entrepreneurs Can Learn from Artists, and Vice Versa
Entrepreneurs are artists, and artists are entrepreneurs. They’re both trying to create things that touch people’s hearts, and they both need to sell something of what they create in order to keep food on the table.

Continuity Is Key
Your big dreams only come true if you work towards them every single day. It is on this very step that so many people fail.

The catch is that for an awful lot of the days, especially at first, you’ll see very little progress if any. Most days, you’ll see failure. You’ll not see a bump in traffic. You’ll not see any noticeable increase in skills or fitness. You’ll feel like it’s never going to happen.

Is Evil Plans Worth Reading?
Evil Plans pretty much does what it claims to: it covers the ins and outs of chasing after what you really want to be doing with your life. It’s not an easy road – most of the sections in this book actually address specific difficulties with following the path – but the path itself is immensely rewarding (let alone the destination).

If that sort of path for your life sounds appealing, Evil Plans is a very worthwhile read. If that’s not the path you’re on, this book will be largely useless to you.

Check out additional reviews and notes of Evil Plans on Amazon.com.