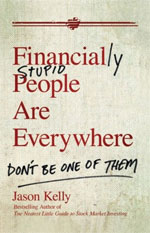 The title of this book convinced me to pick it up at the library recently, but it was the introduction that caused me to actually take it home and give it a full read.

The introduction, entitled “Life as a Sucker,” makes the case that society is stacked against individual financial success unless you already have a lot of capital. Almost every element of modern society and government works against you without a large bankroll in your hand with which to generate more money.

In some ways, I agree with him. The path to personal finance success is not an easy one. I receive far more notes from people in financially disastrous situations than I can ever possibly address in my reader mailbags. There are, of course, reasons for that phenomenon, many of which the author, Jason Kelly, addresses in this book.

1: The First Rule of Finance
Live within your means by spending no more than 80% of your take-home pay. That’s the first rule of personal finance and I absolutely agree with it. If you can commit to doing that on average, you’re going to find yourself building up a lot of money in your savings over time, money that will keep financial disasters (like a job loss) at bay and make moves like buying your own home or buying a replacment car much, much easier. A big key, though, is to bank on that money, meaning that if you take money out of your savings, make extra payments beyond that 20% to restore what you took out.

2: Credit, Cars, and Castles
Kelly identifies these three elements as the most devastating opponents of personal finance success. Your credit cards (and the availability of easy consumer credit, your automobiles, and your home – together, they eat up a lot of your monthly resources if you’re paying off all of these loans. If you’re taking out a big debt for a home or an automobile that goes beyond what you minimally need, you’re essentially locking down your finances each month for the sake of having something beyond what you actually need. You’re chaining yourself to your job and walking a tightrope because you wanted more stuff.

3: Toxic FSP in the Alphabet Industry
The housing bubble only happened because people forgot the first rule of personal finance and allowed themselves to live beyond their means. When lots of people start doing this, you’ll eventually see a financial bubble of some sort, and when the people with a lot of money decide that the bubble is going to burst, they move their money and lo and behold, the bubble bursts. Prices revert to the mean and people who bought in during the bubble are left holding the bag.

4: The Society You’re Up Against
Society in general encourages overspending. It lauds having the latest consumer goods, encourages people to buy the latest and greatest things, and idolizes people who have great material wealth while encouraging others to emulate them. The end result of this, of course, is widespread financial hardship as people use their limited means to chase an affluent lifestyle that they think they deserve. The only people that win in this equation are the people who own the companies manufacturing all the stuff.

5: Government of the Corporations, by the Corporations, for the Corporations
The laws of the United States protect corporations by giving them most of the rights of people but few of the restrictions of people. For example, if a company is neglectful or abusive of someone, they are only penalized a small cash amount – you can’t send a corporation to prison. Thus, corporations push the boundaries of what would be legal or ethical behavior for an individual person because there is minimal penalty for them to act in that way.

6: How Money Is Power
Money is power because it both influences the laws of the land and also influences the methods people have of getting information. The more money you have, the better access to information that you have and the better decisions you’re able to make. In short, if you don’t have money in the bank, the deck of society is stacked against you.

7: Financial Freedom
This brings us back full circle to the idea that freedom is bought by having control over your finances. Kelly makes the point that of the money we earn, roughly a third goes to government, another third goes towards maintaining what we need, and the other third goes towards maintaining what we want. The problem, of course, is that people are clever at extracting money from that third that defines what we want, either by convincing us that it’s a need or justifying the want. The path to financial freedom is understanding that “want” section: knowing what is and isn’t a need and having control over the things you want.

8: Guarantee Your Own Well-Being
The best thing you can possibly do for your future is simply to gain control over your wants and put some of that want money to good use. Money in the bank is the best guarantee we have for present and future well-being that isn’t reliant on banks or government or any other entity to hold us up. If you want to succeed no matter what the future holds, you have to be self-reliant.

9: On the Front Lines of Freedom
Kelly closes the book by offering a few examples of real lives: people who are fighting this battle for themselves, getting control over their wants and their finances for a long-term healthy future.

Is Financially Stupid People Are Everywhere Worth Reading?
I really enjoyed this book simply because it stands out distinctly from the pack of personal finance books out there. It says some distinct, interesting, and thought provoking things about the causes of individual financial malaise and offers some unique angles about how to escape that malaise.

Financially Stupid People Are Everywhere has more of a political tinge to it than most of the books I review – it’s an integral part of the book, one you’ll figure out within fifteen seconds of reading the introduction. Because of that nature and because Kelly keeps that focus throughout, Financially Stupid People Are Everywhere becomes a pretty compelling and thoughtful read.

I don’t purely agree with everything Kelly says in the book, but I do think there are a lot of worthwhile ideas in here to consider, and that makes Financially Stupid People Are Everywhere a worthwhile read.