Review: Finding the Next Starbucks 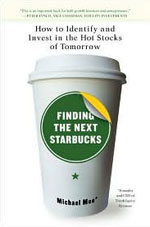 A while back, I read Louis Navellier’s The Little Book That Makes You Rich, which was intended to serve as a simple introduction to growth investing. For those unfamiliar, growth investing means that you seek out and invest in individual stocks that show distinct signs of growing rapidly over the next few years – think Google or Starbucks in recent years.

I don’t particularly plan to invest a lot in individual stocks in the near future, as I’m primarily focused on paying off debts. However, I am quite interested in and trying to learn as much as I can about individual stock investing and the strategies one uses in picking, buying, holding, and selling individual stocks. Navellier’s book was my real introduction to the growth strategy and the ideas stuck in my head and bounced around in my thoughts until I just had to find a book that discussed modern growth investing for the individual investor.

That led me straight to Michael Moe’s Finding the Next Starbucks. It basically focuses on how to spot companies in their early growth phase, theoretically enabling people to invest at the IPO or shortly after in companies like Home Depot, eBay, Dell, Google, Starbucks, and so on. In other words, it focuses on a flavor of growth investing that seeks to find companies early in their growth curve.

Finding the Next Starbucks was recommended to me by several people as a great book to look at for a modern growth investment strategy, and they professed it to be well-written and easy enough to understand while laying out a strong strategy. Does the book actually live up to this hype? Let’s find out.

Looking Into Finding the Next Starbucks

1 – Star Search: Finding the Supernovas
Moe opens the book by arguing that the most lucrative investment opportunity available to investors is identifying and buying into a small company that has the potential to grow into a big company. If you can latch onto one of those, not only can you ride the actual growth of the company, you can also ride the surge of the herd of investors buying into the stock as it rises into the stratosphere, pushing the price up even more. This chapter is mostly just filled with specific examples of spectacular growth stocks, like Home Depot and Starbucks. In short, he makes the case that, indeed, growth stocks are a good investment if you can get in on that ground floor … but how do you do that?

2 – The Power of Growth: The Magic of Compound Interest
Here, Moe just reiterates the astonishing power of compound interest, showing that when you have the opportunity to ride a rocket ship for a number of years, sitting on a stock that sees very nice double digit annual returns, your actual profit will be enormous. It’s a fairly simple concept to those familiar with personal finance, but it’s quite important for your investments.

3 – High Earnings Per Share = High Internal Rate of Return (the Argument)
At this point, Moe makes it clear that he is trying to distinguish between growth stocks and growth companies. Growth stocks are merely ones that show signs of having a premium value for some reason, while growth companies are companies that show signs of entering (or being in) periods of rapid growth. Basically, most of the time, growth companies are a particular subset of growth stocks, and they’re a subset that he’s interested in. How do you find them? Moe identifies the biggest factor as being a high earnings per share, meaning that the company earns a lot of money compared to the number of shares of stock available for purchase for that company.

4 – Formula for Identifying and Evaluating the Stars of Tomorrow (the Process)
Here, Moe talks about the things he looks for in identifying a great growth company. For the most part, these factors are intangibles – ones that you can’t really break down into numbers. For example, he looks for companies that have great people (particularly great management) and also companies that are poised to take advantage of megatrends, or major shifts in society or industry. In other words, Moe looks at the company itself, not a numerical representation of the company found on the stock page.

This concept reinforces a fact that keeps popping up again and again in the books I read about individual stock investing: homework pays off. The people that manage to beat the market with individual stocks are the people who are able to invest the time and have the passion to do the research and find these good companies and good stocks to put their money in, and they have the mental attitude to stick with it through bumps and downturns.

5 – Megatrends
So what are these “megatrends” that Moe talks about? He spends about a hundred pages here identifying and looking carefully at a wide array of megatrends that he sees coming in the future. Now, to a degree, this material is pure speculation on Moe’s part, but he makes a compelling case for each one.

Moe’s biggest megatrend is the increased reliance of the U.S. economy on knowledge workers, ones that bring a specialized but important set of skills to the table. He looks to companies that provide IT services and health care as being industries that really benefit from this megatrend. In fact, he keeps going back to these two industries as ones that will see exceptional growth in the coming decade, because they fit a lot of his megatrends.

6 – The Four P’s
Finding the Next Starbucks identifies four P’s as being vital clues as to the growth forecast of a company:
People – does the management team have a plan in place and the skill to move that plan forward?
Product – is the company providing a product that is compelling?
Potential – does that product have a lot of room for growth in the current marketplace?
Predictability – is it easy to see where and how this company’s growth will occur?

I thought of Starbucks when reading about the four P’s. It was pretty clear that they had the people, the potential, and the predictability, but I’m not sure I would have believed in the product outside of the coffee-happy Pacific Northwest.

7 – Valuation Methodology
This chapter dove pretty deeply into the math of what a particular company should be valued at, which is useful when you’ve found a growth company and are considering buying. Moe’s math is fairly complex, but in a nutshell it relies on the company’s P/E ratio and the value of a ten year treasury bill. It makes sense, as it uses the status of the treasury bill as an indicator of where it makes sense for investors to put their money – if the t-bill has a low return, investors are going to be more into the stock market, thus you can expect to pay a higher price on a stock when the t-bills are low than when they’re high. He almost insinuates that the time to hunt for good deals is when t-bills are high, but doesn’t quite make it.

8 – Sources and Resources: Finding Ideas
Finding the Next Starbucks repeats the “homework, homework, homework” mantra here. Moe gives a long list of the resources he uses to find ideas and companies that may be poised for breakout success. For the most part, I think his list is pretty mainstream and expected – he tracks some of the most high-profile investment papers and websites and a few top blogs, as well as keeping some very close tabs on the actions of some venture capital companies (by searching Google News and likely Google Blog Search, too).

If I were doing this, I would likely pick a specific sector or two and know that sector cold. If you spent time following Moe’s ideas, you should find yourself with a handful of sectors to concentrate on. Dig deep into those sectors and look for companies that are making waves. To a degree, Moe’s resources show that he does this, but he doesn’t explicitly mention it.

9 – Think Tomorrow, Today: Hot Areas for Future Growth
Earlier in the book, I was fairly frustrated that Moe didn’t explicitly discuss specific sectors and how they related to his identified megatrends. He gets around to that here, and it makes some sense why he kept them separate – these sectors and individual companies are like surfers on the waves of megatrends – some of them will catch the wave and ride it to success, while others will fall off the board and land flat on their face. That’s what the four P’s are about – trying to figure out which is which.

Most of the sectors Moe identifies here are either directly related to the internet and communications or are connected to health care, both of which are unsurprising. While his sectors make sense, in some cases he misses out on the individual company lists. For example, he excludes Apple from the list of companies that would ride the cell phone sector, but when Apple dropped their iPhone in 2007, their stock doubled in a year. I think Moe’s sectors make a ton of sense, but do your own homework when looking for individual companies.

10 – Case Studies
Moe closes the book by looking at a bunch of case studies, either examining specific companies or comparing two companies within a sector (like AMD and Intel). He repeatedly uses the methods from the book, tying the sectors to megatrends, then identifying the four P’s within the evaluated organizations. When two companies are compared, he usually concludes that one is poised for more growth than the other, and he’s pretty good at it – he predicted that Best Buy would continue to outgrow Circuit City and now Circuit City is having some serious problems, for example.

This was actually the best part of the book for me because more than most personal finance books, Moe actually effectively tied everything he talked about earlier in the book into real-world examples that could be followed and comprehended. It took a book that I was rather wishy-washy about and turned it into a book I quite enjoyed, because I found myself flipping back, rereading earlier parts, and really getting a better understanding of the whole book.

There are parts of this book that are dry and boring, and there are a few instances where Moe seems to have an ego. For much of the book, Moe seems to be talking in terms of concepts that are hard to describe in concrete black-and-white terms.

That sounds like I’m going to slam the book, but I’m not: Michael Moe’s Finding the Next Starbucks is actually a very good read if you want to learn about how to invest in growth companies. More than any stock investing book I’ve ever read, Moe takes conceptual elements, builds on them, and then shows how they really apply to real stocks.

Bear with the slow parts: eventually, the book gets around to tying these all together into a very sensible package. I found myself quite bored during the Megatrends chapter, for instance, but later on the ideas presented there seemed a lot more concrete, interesting, and applicable. Stick with it, and this book will be well worth your while.