Review: From Bud to Boss 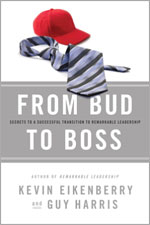 One of the best discussions I’ve ever had with a reader was with Emily. Emily worked in an office environment where the supervisor position was going to become available soon. She felt as though she had the skills to take on that position and the track record in the workplace to win the competition for it, but something else worried her.

She felt that she had a great relationship with a lot of her coworkers. They were her friends and confidants, and she was worried that becoming their supervisor would damage those relationships.

I felt as though that were a valid concern. Quite often, the job requirements of being a supervisor can really interfere with relationships you might build with people in the workplace. You might like your boss or you might dislike that person, but there’s still an inequality between the two of you in the workplace hierarchy.

I encouraged her to talk about it with her friends and make up her own mind. She decided not to seek the supervisor position after some time reflecting on it, which was probably the right move for her.

Recently, I discovered a book that would have been just about perfect for Emily. From Bud to Boss by Kevin Eikenberry and Guy Harris covers this exact scenario. How do you transition from being “one of the gang” to being a successful leader? It’s not an easy path for anyone to take.

Succeeding in Your Transition to Leadership
The most profound idea that Eikenberry and Harris set out in the book comes early on, when they focus on the difference between control and influence from a manager’s perspective. If you focus on controlling people, the amount you can actually control is pretty limited. People don’t like to be controlled and the more controlling you are, the more they’re going to squirm away. Instead, you should focus on reducing your control and instead focusing on your influence. Instead of telling people what to do, instead talk about what needs to get done as a whole and break it down in front of everyone so everyone knows the role they have to play. Give them some slack and let them know that you really believe they can do what they need to do. Many people thrive under those conditions and it doesn’t have to rely on “putting the hammer down.”

Change
The best way to handle this kind of transition is to talk about it. Ask questions. Ask people in the office what they’re feeling, what they’d like to see done differently, whether they’re happy with their job right now, and so on. Talk about your own challenges in this new role so that they understand that you’re both facing new challenges in this changing time. Candor really pays off during times of change.

Communication
As you establish communication lines during the transitional period, keep them open after the transition has happened. Talk to people often – and not in a Bill Lumbergh top-down-do-what-I-say approach. Ask them what their challenges are. Let them know what you can do – and what you’re doing – to make it possible for them to succeed.

Coaching
This section focuses on the difficult task of giving feedback to people based on their performance. The key, as always, is to look for both positives and areas to work on for everybody. The best supervisor I ever had told everyone in the office, all at once, that he was going to tell each of us about the things we’d done well and give each of us one area to work on to improve our job performance in the coming year. That’s exactly what he did and that made all of us feel as though we weren’t being singled out for bad performance while also hearing about the thing we needed to improve on.

Collaboration
A key part of success in any workplace is hinged on the success of collaboration. Are people able to work together well? My experience – and this is right in line with this section – is that success often is hinged upon each piece of the collaboration understanding clearly what is expected of them and what the other collaborators expect. Again, it all comes back to clear communication.

Commitment to Success
In the end, it all comes back to you. What’s your commitment here? Are you committed to building a career here? Are you wanting to build a track record of success? It’s really up to you. A key thing, as always, is to be clear with yourself – and with others around you – with what your goals are. Hidden games rarely work. Hiding in your office doesn’t work, either. Instead, be clear with what you’re doing and what you expect from others.

Is From Bud to Boss Worth Reading?
Much of the content of From Bud to Boss is just a primer on how to be a good boss with some material included to make people feel more comfortable with the transition from coworker to supervisor.

That doesn’t make it a bad book. In fact, it makes it a very good book for people in Emily’s position. If you’re thinking of trying to take on a supervisory role but are afraid of how it will impact your workplace relationships, this is an incredibly valuable read.

Check out additional reviews and notes of From Bud to Boss on Amazon.com.