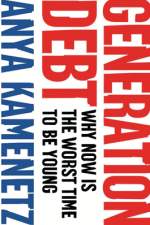 My interest in Generation Debt comes from the fruits of a series of lengthy discussions I’ve had with my in-laws as well as the parents of other friends. These discussions basically focused on a two-pronged central concept: that Generation X and especially Generation Y have had a terrible financial hand dealt to them compared to the Baby Boomers, and the Baby Boomers are mostly at fault for causing this.

Generation Debt mostly focuses on the first piece of that discussion, as it argues in detail that young American adults are entering a workplace and economic environment that is not condusive to gaining the levels of material wealth that their parents held. In fact, the book goes so far as to argue that the current environment makes it much more difficult for young adults to reach traditional thresholds of adulthood, namely leaving home, finishing school, becoming financially independent, getting married, and having a child.

What changed? Let’s find out.

The first portion of the book focuses on the double-pronged attack that adulthood levies on the young: cheap labor or expensive schooling? For many people, this is a terrible choice: they aren’t in the upper crust of students, so schooling is very expensive, but they also don’t have the option of entering the workforce directly and making more than a pittance.

In 1970, a high school graduate didn’t have to go to college to earn a strong-paying job. There were manufacturing jobs available to people with work ethic, jobs on the floors of factories that paid $15-$20 an hour in wages in 1970 dollars. Today, those jobs simply don’t exist, so the only option for an individual to match the wages that their parents could make right out of high school is to go to some sort of post-secondary education, or give up that dream and work an $8 an hour job at Home Depot.

On page 52, Anya hits directly upon one of the major problems with the cost of education right now. According to traditional loan profiles, an average person has a manageable level of non-housing debt if the total debt payment each month is 8% or less of their gross wages. This fits right in with the general home loan model of not exceeding 28% of your gross with housing debt and not exceeding 36% of your gross in total debt, the difference of which is that magical 8%.

In 2000, 39% of graduating college students left school with unmanageable debt as defined by that criteria. Furthermore, 59% of college graduates in a 2002 poll indicated that their student debt is a major obstacle in their financial life. In short, education is breaking the back of our children. Admittedly, I’m no different: my student loan and credit card debt upon my college graduation had minimum payments that pushed me into the unmanageable debt category.

There’s another factor that makes this problem even worse, and that is the fact that young people entering the workforce have some pretty high expectations thrust upon them. Many of their parents and grandparents never had to face this situation. They left high school and were either able to start earning immediately, or were able to take advantage of relatively inexpensive higher education (the increase in education costs has far outstripped inflation since 1970). Neither formula works any more.

Thus, young people who cannot pull off this miracle are often seen as failures in the eyes of their parents and grandparents who look back upon their own experiences and recall only easy successes. They remember buying their own home at age twenty five and thus are appalled at the “laziness” of their children when they can’t buy a home at age thirty.

So what’s a young person to do when dealt a hand like this? The obvious answer is debt, debt, debt – and it’s one that is suffocating many young people.

The middle section of this book relies heavily on the concept of the “social contract,” as described by Jean-Jacques Rousseau. In so many words, the social contract assumes that all people live in non-ideal conditions, and in order to move away from these conditions people enter a “contract” with one another which allows them to live together in peace and unity, improving conditions for all.

The social contract is more than just a concept; it occurs again and again in modern society, both in tangible form (the New Deal, for example) and intangible form (people pitching in to help in the immediate 9/11 aftermath).

Kamenetz spends the middle section of the book arguing that the social contract built up in America during the twentieth century enabled previous generations (in particular the baby boomers) to achieve huge successes. However, she argues, that social contract has now been broken in a number of ways:

Steady labor is a thing of the past. In the past, employers and employees had a relationship of mutual respect in which workers could expect long periods of steady employment in exchange for their labors. Today, no one expects long-term steady employment.

Consumer prices for everything have risen, while real wages have fallen. It is much more expensive today for a minimum wage worker to buy a loaf of bread than it was thirty years ago. In other words, merely being employed does not make it easy to even keep food on the table, let alone provide housing. Wages simply aren’t growing to match other prices.

Marketers have unforeseen access to impressionable youths, convincing them of the value of materialism. Children today are inundated with extremely clever marketing the day they are born, marketing that repeatedly issues the mantra of consumerism: keep trying to keep up with the Joneses by buying more and more stuff you don’t need. This marketing is now tied to concepts completely unrelated to the product and instead related to an individual’s self worth, a challenge that previous generations never had to face in their formative years.

Social Security is insolvent. Even the government-mandated social support structures are ailing. Programs such as Social Security might survive long enough for the baby boomers, but by the time Generation X gets old, they’ll either be insolvent or else they will have required a significant influx of money during the prime earning years of the younger generation.

In short, Kamenetz believes that the old social supports are eroding away, stripped away by individual greed.

What Can Be Done?

The book ends with a section that outlines what people can do to fix the deplorable situation outlined in the book. What can be done to ensure that later generations do not have to face the obstacles faced by Generations X and Y?

First of all, the book offers a collection of suggestions for baby boomers with children in the 20-35 age range. Here’s a few that stood out to me:

Understand that the financial experience of your child is much different than your own experience at that age. This is basically the entire premise of the book; if you read this book and still don’t understand this point, I have to wonder what you’ve been reading.

Have an adult conversation with your kids about money. This doesn’t mean trotting out the same old bromides, but actually listening to their issues and considering their reality. Often, the best support that you can give is a serious talk where their point of view is considered, no matter how you may feel about it.

Use some of your leverage to help. You can do any number of things, from offering clearly-delineated financial assistance to references to potential employment opportunities to contacting legislators about improving opportunities for Generation X and Y.

On the other hand, the book also offers a litany of suggestions for those people in Generation X and Y:

Divorce yourself from rampant materialism. You do not need that PlayStation 3; you do not need that $500 pair of pants. Don’t spend money on wasteful consumer product – buy what you need and bank the rest for things that really matter, like a home.

Maximize what you have. If you have a steady job that pays reasonably well, stick with it, even if you don’t like it. Build a financial backbone so that you can afford take a career leap later.

Take a stand. Form a political action committee or join with others that already have and take your message to the legislators. Work to reform the system instead of just complaining about it and bearing the burden.

With a title like this, it’s difficult to really guess what the book will actually be about. When I first picked up Generation Debt, I was expecting a lengthy missive about the specific financial problems of Americans under the age of 30, who are facing a set of financial conditions much different than previous generations faced during their early adulthood.

Rather than strictly talking about dollars and cents, this book is mostly about the varieties of experience that these two generations have in their early adult lives, mostly focusing on the younger set because their situations aren’t documented nearly as well. In that regard, the book succeeds brilliantly.

Thus, the people that really need to read this book are teenagers, twentysomethings, and their parents. In fact, I’ve gone so far as to consider giving a copy of this book to my parents and to my mother- and father-in-law to read because it captures in great detail the differences between our experiences.

If this generational gap is not an issue for you, then this book is probably not worth your time. Although culturally interesting, most of the power of this book is reserved for adult children on the cusp of independence and baby boomers who wear rose colored glasses.

I originally reviewed Generation Debt in five parts, which you can find

Generation Debt is the fourteenth of fifty-two books in The Simple Dollar’s series 52 Personal Finance Books in 52 Weeks.