Review: Get Everything Done

Every other week, The Simple Dollar reviews a personal productivity, personal development, or entrepreneurship book. 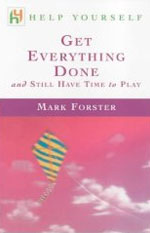 A few months ago, I was very pleasantly surprised by Mark Forster’s personal productivity book, Do It Tomorrow. Most of the time, when I open up a personal productivity or time management book, I can pretty much predict what the book will say – make lists, prioritize tasks, delegate, and so on. Forster surprised me by tossing most of these sacred cows out the door – and he made a lot of sense in the process. I found myself using several tips from Do It Tomorrow in my own life to great success.

As usual, if I find that one book by an author is well worth reading, I make an effort to seek out more books by the author, and that leads us to Get Everything Done, a second book on time management by Mark Forster that seems to be a complement to Do It Tomorrow.

Does Get Everything Done stand out from the crowd in any way, or is one Mark Forster book enough for one’s time management needs? Let’s dig in and find out!

A Walk Through Get Everything Done

1. My Own Experience
Forster opens the book by discussing his own experience with time management, starting with childhood experiences with getting homework done in which Forster was a terrible procrastinator. Over time, Forster began to spend time in environments where he could interact with people who were particularly strong at managing their time – and he began to notice some patterns. The big pattern, though, was that efficient time managers are decisive whereas poor time managers tend to be impulsive. What does that mean? Efficient time managers come up with a plan to deal with almost every regular event in their lives and stick decisively to that plan for processing, whereas poor time managers react to all events on impulse, often handling the events irregularly. Pretty good insight, actually.

2. The Need to Manage Our Lives Better
Most people live their lives in a rut, effectively repeating the same handful of actions each day over and over again. Because of this repetition, we often get stuck in a pattern of how we handle these actions – we do the same things over and over again, almost automatically, without really considering whether these actions are really the best way to handle things. Another side effect: all of these repetitive tasks make our lives feel very busy and convince us that we don’t have time to rethink things. In truth, it just means that we’re very firmly stuck in a time management rut, quite happy to keep repeating the same little mistakes while lamenting the lack of time on a larger scale.

3. The Number One Time Management Tool: Saying No
So, what’s the first tactic to bring about change? Say no to some things and simply reduce the quantity of little demands on your day. If you can eliminate even 10% of the demands on your average day, you’ve suddenly found the time you need to implement systems for more effectively handling the remaining 90% of tasks. Look through your life and current commitments and figure out what you can easily eliminate.

4. Common Time-Management Methods
Here, Forster reviews some of the most common time management methods: prioritizing, doing it now, making to-do lists, scheduling your day carefully, doing the hardest thing first, and simply going with the flow. Forster basically claims that none of these really work in a global way, which is a pretty bold statement considering that these are the backbone of most time management schemes out there. He does point out that they do each work in specific situations, but none of them are a universal fix for time management.

5. What We Need in a Time- and Life-Management System
Forster argues that the real key to success for time management is sufficient regular focused attention. In other words, the best way to actually get stuff done is to focus directly on a specific task until it’s complete and move on to the next one. This requires an effective system for handling interruptions as well as clear processes for handling every bit of information and work thrown your way. This actually sounds like a very good argument for the GTD philosophy.

6. The Different Types of Tasks
The worst kind of task (in terms of interrupting your work flow and causing you to get less done) is a task that has a specific time attached to it – a meeting or an appointment. Such events force you to interrupt whatever task you are working on to give this time-specific task your attention. You should strive to minimize the number of time-specific tasks and appointments on your schedule – simply doing that will free up more blocks of uninterrupted time in your life that you can use to tackle all of the tasks on your plate by focusing on them one at a time.

7. How to Deal with Free-Flowing Items
Forster recommends working in bursts on virtually every free-flowing task you have. These bursts should be relatively short – forty minutes at most – and should alternate between tasks, meaning you should switch to a burst of time on something completely different. When you have a large task on your plate, use a five minute burst simply to brainstorm on the task, coming up with something of a work plan for future bursts. This scheme seems simple, but it really works – I’ve been using it this week, “bursting” from writing posts to brainstorming post ideas to communicating with readers, and it really works well!

8. Variations on the System
Most of the variations that Forster mentions revolve around changing up the length of time one uses for “bursts” – trying shorter bursts for some tasks (like emails) and longer bursts for other tasks (like composing posts). One might also want to consider altering burst times while working on the same type of task – in other words, sometimes using a long 40 minute burst for composing posts, but then using a short 10 minute burst the next time (a good amount of time for creating an outline).

9. Dealing with Projects
What about tasks that are far bigger than can be accomplished in a “burst”? Forster suggests that this is the perfect situation for a checklist. Make a list of the big tasks you need to accomplish for the project, then break down each individual item on the list into smaller pieces until you come up with pieces that are small enough that they can be done in a burst. Obviously, doing this could take several bursts to get it right, but such extensive planning can really make a project fly.

10. Structuring Your Work
There are a lot of little tasks that we do over and over again during the day – answering the phone (and taking down messages), dealing with paperwork, and so on. For each of those, you should come up with a system for dealing with all of those things that come in. What’s your system for filing papers that come in? What’s your system for handling phone messages? You should have a standard system in place for all of these things so you don’t have to think about them – and also don’t have an excuse to postpone them.

11. Resistance: The Signpost to Where You Should Be Going
Forster argues that the task that we feel the most resistance towards doing is the task that is usually the most important to get done sooner rather than later. We usually feel resistance because we have negative feelings toward that task – either we simply don’t want to do it or we’re afraid to do it for some reason. Digging into those reasons is usually fruitful, as is directly tackling any and all tasks that we feel resistance towards.

12. How the Resistance Principle Works in Practice
Here, Forster mostly tries to give tangible examples of how the resistance principle – the idea that we “resist” some of the most difficult parts of our day – can often steer us down a path of poor productivity. His solution for identifying such resistance is to create a time diary and look for patterns in it – tasks that are constantly put off until later when they should be done regularly, for example.

13. More about Depth Activities
The book closes with several suggestions on how to improve your productivity through outside means. Forster strongly recommends taking a brisk walk three times a week for twenty minutes per walk as a baseline for physical activity. He also recommends taking up some form of meditation in an effort to relax your mind and body, as well as taking up writing (usually in the form of journaling) to help your mind deal with the information and thoughts that get built up over the course of a busy day.

The second half of this book hummed – the first half was a little slow. The first several chapters didn’t click at all with me – it just seemed very slow. After about chapter six, though, the book really took off and thoroughly intrigued me. What’s the difference? I think Forster’s writing hums when he talks about specific ideas instead of generalities, and he starts getting down to specifics in about chapter six or so.

Time bursts work really well for me. While reading this book, I decided to give time bursts a try in my own professional life. I started by devoting short bursts of time to different activities – writing articles, answering email, dealing with personal tasks – and alternating between them. Amazingly, this worked really well for me.

The “resistance principle” made me re-evaluate some things as well. Quite often, I get the most enjoyment out of outlining the ideas behind posts – brainstorming and coming up with ideas gets my juice going. Sometimes, though, I run into resistance when actually turning those ideas into finished posts. What I found is that I didn’t like formatting – most of my resistance came from not enjoying inserting HTML into text. I found that writing full posts without formatting is often quite fun, so I now treat formatting as a separate task – and that works very well for me. Resistance principle at work, indeed.

Is Get Everything Done Worth Reading?
If you have a strong interest in time management, Get Everything Done is definitely worth reading. Forster has a lot of solid ideas here (and they’re distinct ideas from his other book, Do It Tomorrow) and many of them are very applicable to one’s day to day life.

If you do pick it up, don’t judge the book by the first few chapters. This book starts off really slow and doesn’t pick up steam until roughly the halfway point. If you can make it that far, though, the second half really builds on the framework of the first and introduces a ton of useful and specific ideas that we can all use.

Get Everything Done is well worth a read and is the best book on time management I’ve read since … well, the last book I read by Forster. He really has a knack for the topic.