Each Friday, The Simple Dollar reviews a personal finance book of interest. 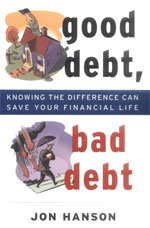 I picked up this book to challenge my own thinking, nothing more, nothing less. Before I opened the cover to this book, I did not subscribe at all to the idea that there is “good debt” and “bad debt.” I believe that all debt is bad, and the wretchedness of the debt depends entirely on your interest rate. After all, all debt has to be repaid out of the pocket of your future self, right?

Jon Hanson takes the opposite perspective. Good Debt, Bad Debt centers around the idea that there are in fact some forms of debt that are actually good, because they move you (at a low cost) towards a big goal, like home ownership.

Does his argument have the necessary meat to convince me? Let’s find out.

One: The Debt Effects – The Invisible Hand of Debt
Hanson does start off with the premise that debt is a negative, pointing out that debt is a pretty poor bargain with four nasty side effects: loss of freedom, loss of cash flow, loss of time, and loss of opportunities. He argues that the only acceptable debts are the ones that don’t have these negatives: loans to get an education (which increases cash flow over the long haul), start a business that you’re prepared to start (ditto), or a real estate loan (a mortgage, for example) that you’re properly leveraged in (which could theoretically increase your cash flow if we weren’t in a disastrous housing market). Basically, Hanson argues that all debt is bad except debt which leads directly to greater cash flow. I can at least understand that philosophy, even if I think the lines are fuzzy – for example, if you need a car to get to your job, wouldn’t that make a car loan good debt? Hanson’s not really clear on the delineations – I think they vary from situation to situation.

Two: Emotional Hostage – How Do I Get Free from Me?
Here, Hanson makes another major point that I largely agree with. He states that we’re largely guided by emotion and that it takes self-discipline in order to not just be guided by whatever our heart wants. We have to be mindful and watchful of our choices, because without thinking about the choices carefully, we’re very prone to just following our inner emotions, which can be easily swayed. In other words, he urges people to trust their minds and not their hearts any time there’s money involved.

Three: Burn Rate – Spending, Not Income, Determines Wealth
Another astute point: “It is hard to see spending as a problem while all of your existing needs and many desires are being met.” I think that statement does a beautiful job of explaining why many people in America live paycheck to paycheck or, even worse, in a state of perpetual debt. Hanson eventually proposes that people focus on cutting their spending instead of a perpetual focus on increasing income, because, as he argues, income comes and goes but spending habits stay with you.

Four: Delayed Gratification – Don’t Wait to Get It
Hanson basically argues in favor of applying “the six month rule” here. Whenever you’re tempted to buy something unnecessary, wait six months. If you still want it, buy it. The reason this works is that you’re often prone to completely forget about the item you want, and even if you do remember it, it’s likely that your interests and passions will have changed by then. Of course, this presents another problem: it requires you to separate yourself from immediacy and the type of purchases you *have* to make in order to put up a false appearance of wealth.

Five: I Don’t Know About My Past – Buy My Future Is Spotless!
Hanson tells some of his life story here, and I found a lot there to identify with. He grew up as I did, in a household without much money that spent whatever they had as soon as they got it. Don’t let your past motivate you – the “I’ll show them” attitude, when manifested through purchases, is a very dangerous motivation, because it causes you to spend money on things you completely don’t need (or even want) in order to “show” someone who doesn’t really care one way or another.

Six: What If You Live? – Make Work a Stage of Life – Not a Life Sentence
The “I’ll spend money now because you only live once!” excuse is extremely weak. If you do live, you set yourself up for many years of misery in order to have a few trinkets and flashy experiences now. The real problem with this excuse, according to Hanson, is that people fall into that trap because they view work as being a giant weight around their neck. In truth, work is just one little stage of life – not the whole thing. Work hard, succeed, sock the money away, and work will be truly behind you instead of just temporarily delayed by some escapism.

Seven: Real Estate – Buy Five Houses – Get One Free!
This chapter is mostly a primer on real estate investing, a topic that doesn’t hold much interest for me at this stage in my life. Hanson’s advice is straightforward, however – buy properties that are in good shape and have value that will hold up over time and hold onto them until the time is right. In other words, Hanson advocates a “buy and hold” strategy for real estate – buy it if the price is right, then wait until someone wants to buy it for a price you want.

Eight: Driving Your Life Away – Are You Driving Your Retirement into the Ground?
The incessant need for a new car is a tremendous cost. Your best bet for maximizing your car’s value is by buying lower-end cars and driving them until they fall apart. The real key? Minimizing the cost for each month of driving. The average new car depreciates at a rate of $250 a month – that money, invested, can make a huge difference later on in your life.

Nine: Do I Have Records? – My Pulse Began to Quicken
Keep track of your spending very carefully and then use that data to figure out what you’re actually spending money on. Not only will this information help you figure out where you’re spending more than you should, it can also help you determine areas where you can make cuts (like eating out all the time).

Ten: You Married Who? – The Ultimate Good Debt – Maybe
The book winds down with some advice on marriage and family. His advice boils down to this: you find a good spouse by knowing them deeply as people before you get married – and that means talking about everything, including money. As for children, your best bet isn’t to talk to them about money. Children don’t learn much from talk – they learn from example. That means if you want your children to have some financial sense, it’s time for you to step up to the plate and show them how it’s done.

Some Thoughts On Good Debt, Bad Debt
Surprisingly, given the title, I agree with most of what Hanson has to say. The “good debt, bad debt” dichotomy wasn’t nearly as dramatic as the cover made it seem and it was really only discussed in the first and eighth chapters.

Good Debt, Bad Debt is not a good name for this book. The main theme of this book is actually that getting your spending under control is the key to wealth. I wonder if a lot of readers were surprised by this?

Was I guilty of making unnecessary purchases to “show” my friends and family? When I look back at the “heavy spending” stage in my life, I can’t help but wonder if I wasn’t spending at least a little bit to impress others. While I did watch them fanatically, I did enjoy showing my enormous DVD collection to others when they’d visit.

Is Good Debt, Bad Debt Worth Reading?
If you’re expecting an intensely helpful workbook to assist you in getting out of debt, this book’s probably not for you. On the other hand, if you want some realistic and well-written musings (with a lot of cultural and literary references) on debt and the modern financial lifestyle, this one’s quite a good read.

Good Debt, Bad Debt was one of those few personal finance books that was purely fun to read on its own, not because the topic was insightful or informative. Mostly, it just covered the basics of the premise “spend less than you earn,” but Hanson’s style made the book go down easy and quick.

If you want some enjoyable bedside reading on basic personal finance topics, Good Debt, Bad Debt definitely fits the bill. Just don’t expect it to answer every personal finance question you might have.