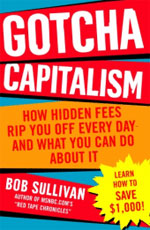 Few things annoy me more than hidden costs. In fact, it was repeated hidden costs that finally made me ditch the bank I had been using for a decade – I got tired of hidden maintenance fees and ATM fees sneaking up on me time and time again. This sorry trend is prevalent in a lot of industries and is a quiet frustration for a lot of people.

Bob Sullivan, the writer of MSNBC’s Red Tape Chronicles, takes on this topic in Gotcha Capitalism Subtitled How Hidden Fees Rip You Off Every Day – And What You Can Do About It, it simultaneously seeks to expose the wide variety and depth of such tactics and to offer advice on how to fight back against them.

It’s an interesting topic to discuss, but as I look at the cover, I can’t help but wonder if it isn’t better covered by a series of blog posts rather than as a full book. Initially, I would expect this to be a seven or eight part expose on the Red Tape Chronicles – is there really enough meat in this topic to make a compelling book? Let’s find out.

1. The World of Gotcha Capitalism
Amazingly, the first thirty six pages of the book lay out the main idea of the book: companies often ding their customers quite vigorously with hidden fees of all kinds. This opening piece reads like an extended, well-edited edition of Sullivan’s column, laying out in great detail how and why companies do this. In short, companies toss in these fees because they’re a very easy way to make a profit and most people simply don’t bother to complain about them. And why not? If you, as a company, can slip an extra $10 out of the customer’s pocket, that’s basically pure profit, adding straight to your organization’s bottom line.

Amazingly, the rest of the book merely expands on this opening thesis, exposing specific examples of these fees as well as offering tactics for fighting them.

2. Sneaky Fees in Everything
There is a ton of good advice in this section of the book on fighting fees of all kinds. I’m just going to highlight just a few of these tips.

Credit Cards Credit card companies will find creative ways to ding you if you carry a balance at all. Thus, your best technique is to pay off your whole balance every month like clockwork. If you can’t manage that, use online bill pay to automatically pay $50 or $100 each month well in advance of your due date so that you don’t get dinged with late fees, ever.

Banks Never get overdraft protection – it only takes a few months for the fees from that protection to outpace the cost of an overdraft. Instead, use online banking (I use ING Direct, an online-only bank, for my primary banking) and check your balance consistently so that you know where you’re at. Also, never assume something has deposited, ever – I used to make this mistake with my old bank. Instead, use that online banking to make sure something has deposited before you go to spend that cash.

Retirement/401(k)s Have a meeting with your plan representative and flat-out ask about hidden fees and expense ratios, because quite often the funds with the best returns also have huge hidden fees and a very high expense ratio (meaning that, in an average year, this fund will do pretty badly). The best rule of thumb? Choose the investment choice that has the best return after you subtract out the expense ratio and the fees, because that’s the fund that’s most protected against a downturn in the market and isn’t just capitalizing on the “trend of the moment.”

Mortgages and Rentals Shop around, and try to get good faith estimates for identical loans across lenders – same number of years, same interest rate. This will reveal differences in closing costs. Then, once you have an idea of who’s ripping you off on the closing, you can use that to decide between competitive lenders with similar rates. My tip? Don’t forget the local credit union. They treated us very well in our mortgage process.

Cell Phones Right off the bat, ask the provider to waive termination, activation, and upgrade fees. If they won’t do this, move on – a slightly worse plan that won’t ding you with these nonsensical fees is usually a better deal. Another useful tactic: download cell phone unlocking software so that you can keep your phone after your plan terminates, making it easy for you to move to another carrier without the cost of buying a new phone.

Home Phones Best tip, and one that I’ve used in the past: study your bill, then call the phone company and get rid of every service you don’t need. By default, they usually put on “services” that you’re unaware of and don’t really need.

Pay TV With so many competitors out there, pay television services are often quite willing to cancel any fee you get and often will lower their rates (or maintain earlier rates you received) just to keep you as a customer. Call up and ask for any fees to be removed and ask for a lower rate – just be sure you avoid any long term contracts.

Internet Access Service providers often slip fees onto a bill and make them appear to be taxes. If you don’t know what a line item is, ask, and if it’s not a tax, ask for that fee to be waived. Also, regularly use speed testers like Speakeasy to make sure that you’re getting the speed you’re paying for.

Travel Hotels in particular like to tack on extra charges, so be sure to go over what will be on your bill before you even make a reservation – and try to get those fees waived before your trip.

Groceries The worst deals in the grocery store are usually at eye level and are usually closer to the entrance. In other words, to find the best deals, look far higher than your eye level and far lower, and also be willing to go around the whole store looking for good prices. Also, loyalty cards are a good deal, but it’s a good idea to regularly swap them with your friends in order to obscure your buying history (for privacy purposes).

Gift Cards If you’re thinking of giving a gift card, give cash instead. A gift card is basically a gift of cash with restrictions on it – fees, expiration dates, and such.

Rebates Fill them out as soon as possible or else you’ll forget about it. This is so true – I found a rebate form a while back from 2005, meaning I lost out on a significant rebate that I would have collected had I just jumped on the ball right after receiving it.

Student Loans The best tip? Get all of the public loans you can before getting private ones, then pay off the private ones first. Almost always, private loans have worse rates and tend to be much less forgiving than public loans.

3. Toolkit
So how do you fight back? The book offers a lot of suggestions. Here are a few.

Customer Service Calls Don’t be afraid to call customer service, but realize that many companies will put you on hold in order to make you go away. Also, being angry on the phone will never help you resolve your problem.

Sample Letters That Work Writing letters (or emails) to a company can also work, and the book offers several templates for this. The key is sticking to the facts, being brief, and clearly stating the response you expect on this issue.

The Legal Options For most minor situations, legal solutions aren’t worth it – they’ll cost you more in the long run. Don’t bother with a lawyer unless you have a deeply legitimate complaint worth significant reimbursement and it’s well-documented.

Although I was quite aware of the concept of “Gotcha Capitalism,” I was almost shocked at the breadth of it. This book does a great job of showing you how your wallet is being almost constantly nickel and dimed by companies of all stripes. The first half of the book is a great read for anyone, if just for the shock factor. The advice is also useful, particularly for people who haven’t ever even considered raising a complaint about unfair fees. Quite often, organizations will roll back at least some of this craziness and Sullivan offers a great guide to doing so.

The topic of the book is pretty narrow, though, and if you’re diligent about your money and your spending, you’re probably already avoiding a good number of these fees. However, the sheer number of tips on how to avoid such fees is very valuable – I wound up actually busting out the highlighter and just marking tips that were useful to me. That means, yes, this one was a keeper for me if for nothing else than the sheer number of useful tips for avoiding being nickel and dimed to death – thankfully, it’s an inexpensive buy at amazon. A frugal person might want to check it out at the library, but bust out the notepaper – you’ll find yourself taking tons of notes. Good work, Bob Sullivan!