Review: How to Get Rich 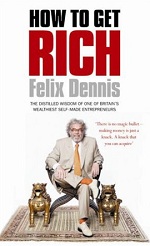 The title of this book alone encouraged me to not bother reading it for the longest time. As I’ve expressed before, I have no interest in being rich. I want financial independence, that’s all, and for me that’s not really a mountain of money. In truth, I just want time to do the things that I want to do.

Over the last year, though, six different readers who wrote to me about various personal finance books listed Felix Dennis’s How to Get Rich among the books that most profoundly inspired them to personal finance success. It was often listed right alongside books I deeply respect, like Your Money or Your Life and Getting Things Done.

With that in mind, I decided to give the book a shot, even though the title gave me some serious trepidation. I felt that the entire book would be speaking to a goal that I didn’t have.

I was dead wrong.

“>How to Get Rich is an incredibly poor title for this book. In fact, it’s the worst thing about this book.

“>How to Get Rich is about how to succeed in any endeavor you put your mind to. If you want to be the best community organizer in the world, you won’t get financially rich, but this book will help you get a lot better at it. “>How to Succeed probably wasn’t as catchy of a title as “>How to Get Rich, but it’s a more accurate title.

One | Pole Position
If you have nothing, you have nothing to lose. Thus, people who are just starting out often have the best chance to succeed. They don’t have a carefully curated career to maintain or a pre-existing set of standards to live up to. Instead, they can simply play by their own rules. The best thing you can do if you want to succeed at anything is to not care about losing. And you probably will lose – a lot. The catch is that if you choose your actions as though you’re afraid of losing, you’ll never win. You’ll be mediocre.

Four | The Search
What do you want to do with your life? I spent most of my twenties trying to figure that out, as do a lot of people. What I didn’t realize then – and now I see it, clear as day – is that most of the jobs you do during your twenties aren’t there to build the basis for a career. They’re there to keep food on your plate while you spend your real energy figuring out what that one thing that you want to be doing with your life really is.

Five | The Fallacy of the Great Idea
A single “great idea” won’t make you rich. What makes people rich is taking a great idea or two and putting a small mountain of sweat and effort into that idea. I have a great idea for a novel, but I won’t make a dime from it unless I dump in a ton of time and effort and every drop of writing skill that I have. The idea of a social network was out there before Mark Zuckerberg came along and made Facebook – the difference is that he dumped tons of sweat equity into it and combined it with a few other good ideas. This is true of virtually any “great idea.” It isn’t enough.

Six | Obtaining Capital
You’re going to need help to succeed. Often, that means sucking up your pride and asking for that help. If you’re unwilling to do that, you’re going to most likely sink. Dennis discusses asking for capital at length here, but help comes in a lot of different forms along the way, from good advice to good publicity and good references.

Seven | Never Give In
Once you’ve figured out what you’re going for, don’t give in. It’s often a lonely, painful road filled with failures and also with people asking you to take a different path or to give up on the dream. You’re probably going to feel like you’re losing out along the way. Don’t give up on it. Don’t make choices that force you to abandon what it is that you want to succeed at.

Eight | The Five Most Common Start-Up Errors
Just because you want something doesn’t mean you’re compelled to do it. You might want to be a successful writer, for example, but does that mean you’re compelled to go out there and do the hard work to write novels and short stories and other works and beat the pavement to sell them? You also need to keep cash flow on your mind (meaning: live cheap) and surround yourself with talented people – get involved in communities of people with skills and perhaps hire some of them.

Nine | Cardinal Virtues
Learn. Diversify. Believe in yourself. These are things that anyone who wants to succeed must constantly do. Keep your ears open and don’t assume that you know it all, because you never do. Don’t bet everything on one single endeavor because if that fails, you’re in deep trouble. Believe that you’re not going to fail in the long term (though you’ll most certainly do so in the short term).

Ten | A Few Words About Luck
The ancient Roman philosopher Seneca says that “luck is what happens when preparation meets opportunity.” The more you prepare, the more often luck seems to come your way, even sometimes disguised as poor luck. Focus, practice, good money management, and improvement of your skills means that when opportunities come along, you’re actually able to see them much more often and are financially capable of jumping on board much more often as well.

Eleven | The Art of Negotiating
Eventually, you’ll have to negotiate something with some other party. Dennis strongly suggests deciding what your “target” is before you even begin and that “target” should be set with a lot of careful homework and study. You should never go into a serious negotiation without your homework or your target. The biggest part of your homework should focus on the other party. Why are they negotiating with you? What is it they really want? How can you use that to get what you want?

Twelve | Ownership! Ownership! Ownership!
When you work hard and create something beautiful, you need to maintain ownership of it. When you sell it or sign it away to someone else, you’ve basically agreed to give away this thing that you made. Whatever becomes of it will not matter to you, but your heart will still be invested in it. It’s fine to sell pieces of ownership along the way or to take a burgeoning company public, but remember that whenever you sell ownership, you sell control. You’re no longer making decisions.

Thirteen | The Joys of Delegation
At some point, you’ll have to start delegating some of the things that you work on. You should focus on delegating the tasks you don’t enjoy. The routine tasks that bore you are the first ones that should be delegated so you can retain your energy and focus for the meat of your work. For example, the type of work that I first looked at delegating was the approval of comments – I love to read the comment threads, but distinguishing between spam comments and real comments is/was drudgery.

Fourteen | A Piece of the Pie
If you shouldn’t relinquish ownership, how can you encourage people to help you and to work hard for you? Use your profits to grow what you have. Don’t just channel the proceeds into your pockets – pay yourself a small salary and then channel the proceeds from your work back into the work. This is true whether you’re building a big business or a small non-profit.

Fifteen | The Power of Focus
Having focus right off the bat is easy. The trick is maintaining it. How can you keep focus on what you’re doing? The best way to do it is to change the environment as much as you can on a regular basis. Find new projects to work on. Change the people around you – or at least the positions they’re in.

Sixteen | Whoops!
Eventually, you’re going to make mistakes and fail. The easiest thing you can do to make this more bearable is to build a wall between your personal money and personal assets and the money and assets of whatever endeavor you’re building. Make that wall as ironclad as you can. That way, when whatever you are building runs into trouble, it won’t sink your personal ship.

Seventeen | A Recap for Idlers
The biggest message that Dennis seems to pass along throughout this book is that success relies on self-reliance. You can’t be a success if you rely on others for money, for help, or for anything. Yes, it’s valuable to have those things around to use, but if you rely on them, you’re not independent. Your success depends on their continued support and thus it’s not your success.

Eighteen | How to Stay Rich
The best advice I saw in this entire chapter is to give away what you earn. Give what you’ve earned to charities or to people trying to start their own great thing. This might be money. It might be expertise. It might be connnections. When you give, it comes back to you tenfold because the people you help will feel a great deal of gratitude toward you and will help you in countless unforeseen ways.

Is How to Get Rich Worth Reading?
Absolutely. If you want to succeed at any sort of endeavor in life, read this book. Don’t get caught up in the specifics of business success that he’s talking about, because an awful lot of it won’t even be true for other businesses. Instead, focus on the broader principles of what he’s talking about.

This book is an automatic addition to my “keep ’em and reread ’em” shelf of personal finance and personal growth books. There’s just a lot of great material and food for thought between the covers here.

The only problem with this book is the title. A much more apt title – but perhaps less sell-able – is How to Succeed. Indeed, it does a pretty good job at that.