Review: How to Make Money with Social Media 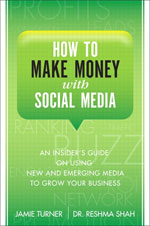 One common question I get from entrepreneurial readers is how exactly people make money with social media. How can you actually make an income posting tweets and Facebook updates?

It certainly can be done. I’ve used social media in the past to both directly and indirectly earn income, though the earnings were never big and I never devoted a ton of time to it. I know of verifiable stories of people earning quite a lot from projects revolving around social media.

This book by Jamie Turner and Reshma Shah focuses exclusively on the question of how you take something you have – an idea, a product, a book, a website, or pretty much anything else – and increase the value of it by social media.

In other words, social media doesn’t make money by itself. It makes money by connecting something of value you have to the customers who might buy it.

The Social Media Landscape
The entire purpose of social media, from the perspective of someone who has something of value that they want to share, is to get positive interest from potential customers. There are a lot of forms this can take, from creating a Facebook fan page and updating it to making a Twitter account.

Good social media use goes beyond just sending out little updates about what you’re doing. It also involves engaging the people you’re talking to by listening to what they have to say and utilizing it in your responses and in your further updates. In other words, it’s a conversation, and one that has value because people who are involved in that conversation have some sense of involvement in whatever you’re doing. It builds a connection, one that people will often follow up on with their time and/or their wallets.

How to Set Yourself Up for Social Media Success
The biggest thing you can do to set yourself up for success is find your customers first. For example, let’s say you’ve written a fantasy novel and you’re thinking of self-publishing. The best route to take is to get involved with groups that are talking about fantasy fiction. Get to know them. Where do they congregate? What do they talk about? What do they like and not like?

Jump into that conversation. Talk about the things they’re talking about. Share what you like – and what you don’t like. Ask questions, because people love to talk about what they think. The more involved you get in the conversation, the deeper the bond you’ll build with your prospective audience.

Social Media Platforms
In essence, this section of the book lists a lot of social media platforms and discusses how exactly they function and differ from each other. The authors are pretty thorough, integrating smaller social networking sites and such activities as blogging.

In the end, the platform itself is secondary. The question is whether the audience you want to talk to is there. Thus, it’s worthwhile evaluating each of these in terms of the people you want to reach.

Social Media Integration
This is where the rubber really meets the road. How do you convince people to get into whatever it is you’re interested in.

My experience has been – and this book seems to match it – is that the best route to success is to simply talk every once in a while about what you’re up to. For example, if you’re trying to get a book off the ground, occasionally mentioning your book (maybe 2% of the time at most) will intrigue people you’ve been conversing with. Overdo it and you turn them off.

How to Measure Social Media
The challenge with social media is measuring the success of it, and it all comes back to “return on investment.” In other words, the question of whether you have success or not should rest entirely on the number of clicks you get, the number of sales you get, and the number of responses you get.

The advantage of social media is that there’s little financial cost involved. The disadvantage is that there’s a lot of time involved. So, what you’re looking at really is the response you get for the time you spend. You’d be surprised how often it’s worth it.

One final thing that I really liked about this book is that it included a long checklist of things to do if you’re thinking about diving into this. This is incredibly useful, but it’s only really useful if you’ve read the book first.

Is How to Make Money with Social Media Worth Reading?
If you’ve ever wondered how people make money using social media or if you’ve ever had something you’d like to build an audience for or sell using social media, this book does a very good job of spelling it out. I would highly recommend this book to someone who has a product or an idea that they want to popularize.

In fact, I may be using it in the near future on a separate project of my own.

Check out additional reviews and notes of How to Make Money with Social Media on Amazon.com.