Review: It’s Not About the Money 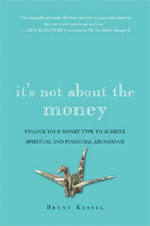 I’ve always been interested in the areas where spirituality and personal finance meet. Blogs like ChristianPF and people like Dave Ramsey who heavily tie their faith into their personal finance message bring a completely different flavor to the table, one tinged with a sense that personal fiance success is a method of getting more deeply in touch with one’s spiritual side and that there is a faith-based calling to better money management.

It’s Not About the Money by Brent Kessel takes another angle on the tension between money management and spirituality. Kessel is a Zen buddhist who practices yoga and spends much of his time seeking spiritual enlightenment. His argument is that in order to find spiritual abundance, one must be free as possible from the shackles of personal finance, and that requires good money behaviors and money management.

You Will Never Have Enough
Our nature, as humans, is to want more. We’re always looking ahead to the next journey, the next goal, the next desire. We always have a concern of some kind in our hearts and we’re always headed towards something. You’ll never have enough.

That seems to run contrary to most personal finance advice, which encourages you to figure out what “enough” is in your own life. Yet, on many levels, I think Kessel is quite accurate with this assessment. There’s always some new journey to take on, some hill to climb.

Our real challenge in life is not eliminating that desire for more, but figuring out what goals we have. What are we really striving for? What provides us with the most thorough joy? Those are the directions we should be striving for – it’s fine to strive for more in an area where you’re thoroughly and deeply passionate and engaged.

The Unconscious Wins Every Time
We all have a story about ourselves in our mind that determines what we think we deserve. That sense of what we think we deserve drives how we manage our money. If we believe we truly deserve more than we have, we tend to spend more to acquire it. Advertising and social cues often prey on that knowledge, doing everything they can to make us believe that we deserve more than we have and this product or this upgrade is what we deserve.

It’s challenging to rewrite that story. It requires a lot of careful introspection and thought about who we really are and what we want from life. From this perspective, it seems clear to me that part of the impetus for our financial turnaround was my impetus to change my story from “successful young professional” to “good parent.” That alteration shifted my goals and priorities significantly and enabled me to make some serious changes to how we spent money.

The Guardian
The first archetype is the guardian. Kessel identifies the guardian as being alert and watchful, wishing to protect something. The guardian is often full of worry and anxiety, but is prudent and always aware of threats to whatever he or she is guarding.

I have a lot of the guardian within me. At one time, I zealously guarded my career. Now, I’m more focused on guarding my children – I now see my career as part of guarding my children. That shift in perspective of how I view my career was a big part of why I made the leap to being a full time writer. I made less money, but my time was much, much more flexible than before, which made it easier for me to be a better guardian for my children.

The Pleasure Seeker
The pleasure seeker puts a huge priority on pleasure in the here and now. They want to have fun and enjoy life now and not worry much at all about tomorrow. Pleasure seekers tend to be hedonistic and impulsive, but they also tend to have a high level of enjoyment of what they’re doing.

Over time, my sense of pleasure seeking has gone down a bit. I’m no longer as concerned with maximizing my enjoyment in the here and now. I’m much happier engaging in things that fulfill my other roles in life. For example, I used to go out almost every night and have fun with friends. Now, I rarely do that – I often have much more fun at home with the simpler pleasures in life.

The Idealist
The idealist believes heavily in creativity, compassion, social justice, and spiritual growth. They tend to believe that their efforts really can change the world – and for the better. Unfortunately, because of their idealism and the crooked nature of the world, idealists tend to often be very wary of others, particularly those they see as obstacles to a better world. Idealists tend to have a difficult time with trust and are often averse to the suggestions of others. However, they’re also often compassionate and have grand visions.

Over time, my idealism has gone up. After all, I went from working as a cog in a huge organization involved with projects that tangentially were helpful to the world to working solo on a website with the goal of helping others with their money problems. I believe that what I do does help a lot of people, but I sometimes fall into that “no compromise” trap that idealists tend to fall into.

The Saver
A saver is always looking for security and abundance. They believe this security and abundance can be found through the careful accumulation of financial assets. Quite often, this means that they forsake spending money at all in order to save more and more. They’re hoarders and penny-pinchers. However, they often are self-sufficient and they usually have more than enough to ride through any crises, which makes them very stable.

I’ve never been a saver unless I can clearly see how it matches a goal of mine. Right now, the heavy guardian in me forces me to see the benefit in saving, so my tendency to be a saver has definitely grown over the past few years.

I’m about as far away from a star as a person can possibly get. I really don’t care much at all what others think of me. I try to get along with others, but I don’t have any need to be a trendsetter or to be seen as cool. I’m just me.

The Innocent
The innocent tends to avoid thinking about money at all. Instead, they rely on good luck and the kindness of others. They just simply believe that over the long run, things will work out for the best. Innocents often are helpless and they tend to avoid financial situations, but they’re often very adaptable to whatever situation comes their way and they have a great deal of hope for the future.

I’m also not an innocent. I’ve never believed that things will just “work out” in the future.

The Caretaker
The caretaker gives and lends money to others. Often, if there’s a person in your family that’s always lending family members money, that person is a caretaker. They’ve got tons of compassion for others and lots of generosity. Unfortunately, they’re also enablers, meaning that their presence often enables the worst behavior in others.

I used to be more of a caretaker, but it was often in conflict with being a guardian, plus I often felt like I was being an enabler. Thus, I’ve pushed this mindset more and more to the background.

The Empire Builder
The empire builder is someone who thrives on power. They want to create something of enduring value, something that will last for a long time, and they’re quite happy to step on others to get there. They want power. Empire builders are usually greedy and seek to dominate others, but they’re also very innovative and decisive.

This is another mindset that I rarely see in myself. I don’t feel the need to build an empire of any kind.

The Middle Way with Money
Obviously, there are good and bad aspects of each of these money archetypes. They each exhibit both bad traits and good traits, and people often mix and match them within themselves.

Some mix poorly. An empire builder and a pleasure seeker together in the same person will throw a knife in your back and twist it without ever thinking twice, but they enjoy life from their perspective and they’ve often got power. These people can be very difficult for others to trust.

On the other hand, a guardian and a caretaker tend to mix well, as they seek to protect things but often choose to do it with prudence. People that others think of as being “steady as a rock” often mix a guardian and caretaker mindset inside themselves.

The Conscious Investor
I felt that this was easily the weakest chapter of the book. Kessel argues here that a successful investor utilizes all eight of the mindsets in various ways to improve their holdings and he makes a good case for each one as a tool to an investor.

The only problem is that the overall investing strategy talked about here is all over the place. It involves simultaneous long term investing and very short term market timing. It involves some “hands off” investing, but also talks about technical analysis.

Rather than presenting a cohesive investing plan, Kessel mostly just describes how the various archetypes can actually be useful for a certain type of investing. The only problem is that the mentalities that succeed at short term investing, if left alone, would result in disaster, as prudence isn’t involved.

As always, the best solution is a good mix of archetypes – that’s true in investing and in life.

The Yoga of Money
Kessel closes the book with a look at money’s role in a broader and more complete life. After all, money is merely a tool to allow you to do what you want to do.

In a nutshell, Kessel argues that no matter what your desires are, you’re served by having money in the bank because your options are much wider open. Of course, for some archetypes (like the pleasure seeker), it’s harder than it is with other archetypes. That’s why a balance is useful – it allows you to find happiness now but also seek happiness later.

Good money management allows you to have your cake and eat it, too.

Is It’s Not About the Money Worth Reading?
It’s Not About the Money is a very powerful book to read if you’re interested in the spiritual side of money, no matter what your faith. Kessel does a very powerful job of connecting the spiritual to the financial through the precepts of Zen buddhism – there’s a lot of thought-provoking material here, the kind of stuff that will leave you thinking deeply about what your role in the world is.

This isn’t a particularly strong book in terms of specific money advice. Instead, it works in the sense that it helps you get your bearings in terms of what you actually want out of life and how it relates to your money. If you’re looking for specific advice and tactics, look elsewhere.

It’s Not About the Money succeeds in making you think. That’s what the best books do.

Loading Disqus Comments ...
Latest from Trent
What To Do With That Last Little Bit Left in the Container
What to Do When the Novelty of Frugality Wears Off
Buying the Best, or Just Good Enough?
Read more from Trent
Featured on: