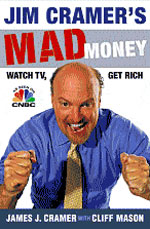 When I picked up Cramer’s first investment book, Real Money, I fully expected it to be obnoxious and loud, like the book’s namesake. Instead, I was rewarded with a very interesting read – one that packed a lot of information for beginning individual investors into one thin volume. It was a fast and enjoyable read, too, so I was quite happy to give the book a pretty sizeable thumbs up.

Recently, though, Cramer produced a follow-up, entitled Mad Money. From the title and the cover alone, you can tell one big thing that’s changed: Cramer now has a very popular stock picking show on CNBC, and this book is pretty clearly co-branded with the show. What will that do to the content within? Will this be a valuable and interesting stock-picking book, or has Cramer sold out?

A quick glance through the chapter titles gives a very cloudy view at best. Some chapters look really promising (“Selling Stocks The Right Way,” “Ten Lessons From My Bad Calls,” and “Ten Lessons From Success: Some Buy And Sell Rules”); others look like television show brand extensions (“How And Why You Should Watch My CEO Interviews,” for one). I was rather queasy about picking this one up because of this air of television promotional material that surrounds the book, but I was still holding back a glimmer of optimism because I enjoyed his earlier investing book so much.

Three Steps To Buying A Stock

A large portion of the early part of the book centers around Cramer’s plan for how an individual small-scale investor should buy a stock. He breaks this down into three parts:

1. Know Yourself And Your Goals
What are you like, and what are your goals with investing? Are you temperamental? Are you young? Do you have a lot of discretionary money? These are vital questions you should know the answer to before you jump into individual stock investment.

Cramer says that there are four key factors in determining how and where you should invest: your age, your discretionary income, your timeframe, and your temperament. If you don’t have a firm grasp on each of these elements, what they mean, and how they relate to your investment, you need to kick back and do some serious self-evaluation before diving into individual stock investing.

Why? For starters, Jim breaks stocks down into four stock types, of which different ones are attractive to different people based on those factors: speculative stocks, value stocks, growth stocks, and steady earners. For example, steady earners are best for people with a shorter timeframe and who are risk-averse, meaning people who are looking at these stocks to earn steady money for them, while speculative stocks are for people with high risk tolerance and a lot of discretionary income that can take the potential hit from a big loss.

2. Do Your Homework
Cramer’s mantra is buy and homework, not buy and hold, and he means it. He gives a five step process for how to evaluate a stock, and he basically says you should never buy a recommended stock for at least 24 hours so you have plenty of time to do this homework. Here are the five steps:

1. How does a company make money? What is their business model? What keeps the cash rolling in the door?

2. What sector is it in, and how does it compare to the rest of the sector? Take a look at the recent performance of other stocks in the sector and see how yours holds up.

3. What does the recent performance of the stock and the company look like? Is the company in the trash can, or is it doing well?

4. What does the stock look like compared to the competition? You should use the forward P/E ratio and also the PEG for such comparisons, according to Cramer.

3. Use Limit Orders And Buy Incrementally
Before anything else, Cramer basically commands people to have a reasonably diverse portfolio: no two large holdings in a single sector and also no more than 20% of your portfolio in any one stock, so that means a minimum of five stocks. He also advocates buying incrementally, meaning not buying your entire position at once. This is effectively dollar cost averaging. One more major point of advice: never use market orders, use limit orders, as they allow you to specify the price you want to buy at, not the price that the market gives you.

He also advocates doing one hour of homework a week per holding, which involves ensuring that your company’s earnings are okay, that your reason for owning the stock is still true (if you can’t flat out state in one sentence why you own a stock, you shouldn’t be in it), and that your company’s sector isn’t undergoing major change.

Most of the latter two thirds of the book is divided pretty evenly between specific tips on individual stock investing and information related to Cramer’s television show, Mad Money. Today, we’ll focus on the tips; tomorrow, the madness.

One large section that I found particularly enlightening was Cramer’s advice on when and how to sell an individual stock. He broke this down into six distinct guidelines:

Keep your position the same size as a stock goes up. Let’s say you have 100 shares when a stock is at 60. If it goes to 100, you should sell 40 shares and have 60 shares at 100. In both cases, your position is the same ($600), but you’ve taken $400 in profit off of the table. By doing this, you protect yourself against the stock hitting its peak before you expect it.

Set a target price. Don’t keep riding a stock until it goes over the peak and crashes. Instead, set a target price at which you will sell, and when the stock reaches that price, actually sell it. This is a check against greed.

Unless you learn something new, sell it at the target price. Of course, if you do learn a new, important fact about the stock, you might want to re-set the target price, but still, if the stock hits the target and you have no reason to change the target, sell.

When you stop thinking a stock will go up (even if you haven’t hit the target yet), sell. Listen to what your heart and mind are telling you – if they’re not in agreement anymore, something’s not right (even if you don’t consciously realize it) and it’s time to get out.

If you double, sell half of your initial position. Why? You’ve taken your investment off of the table and now you’re playing with the house’s money. This is a great thing to do if you still are convinced the stock is going to grow and you want to keep riding it a bit longer, as you’ve essentially removed your investment from the equation and it’s all gravy now.

Always be eager to take profits. If you have a chance to take a profit, you should want to take it. Don’t convince yourself that there’s more all the time or else you’ll be eaten alive. Your disposition should always be to sell, not to hold or buy more.

Cramer also spends a couple chapters reviewing some of the tips from his last book and drawing a few different conclusions. For example, he now loudly says you shouldn’t invest based on borrowed convictions, meaning that following analysts blindly (including himself) is a fool’s game. He also goes into detail about doing the “right” homework – reading a message board about the Playstation 3 is not necessarily a good indicator about the health and future of Sony as a company.

The remainder of the book is focused on supplemental material to the television series, which felt to me like a bit of good investment advice padded with a lot of shilling for Mad Money on CNBC. Basically, Cramer spends four chapters in the book highlighting segments from the show. Here’s what I found that was actually worthwhile in those chapters.

The “Lightning Round” segment boils down to pretty much nothing but sector analysis. Cramer knows about 200 sectors in his head and he can pretty quickly match companies to sectors, so if he thinks a sector is bad, he usually says “sell,” and if he thinks a sector is hot he’ll say “buy.” If a sector is lukewarm, he’ll say “buy” on the best of breed in the sector and “sell” on everything else. This basically covers 95% of the stocks that come through on his show.

The CEO/CFO interviews are actually worthwhile. Basically, what you should look for are CEOs and CFOs that can carefully and deliberately deconstruct criticism levied at their company. If they lose patience or argue with Jim, you should be thinking “sell sell sell.”

The picks on the show have one big thing in common. Most of them are stocks that recently pulled back a bit from their 52 week high. If you know a stock that’s at a 52 week high, wait a week and if it pulls back a bit, there’s a good chance Jim will cover it.

Sadly enough, those were the only really interesting tidbits I pulled from this portion of the book, which was a serious disappointment. I was especially bored by the chapter in which he highlights every. single. sound effect used on the show, even though he usually explains them on air.

Before I even get started, let me make this clear: Mad Money is not a bad book. I quite enjoyed almost all of it. However, with that being said…

I do not recommend Mad Money to anyone who has not already read Real Money. To put it simply, Real Money is a solid, complete, and entertaining book about individual stock picking. This book, on the other hand, is best described as a supplement to Real Money with a few additional chapters explaining a television program.

That’s not to say I didn’t enjoy Mad Money; I certainly did enjoy reading it and I found much of the content to be both useful and entertaining. However, reading it in a vacuum without the pillars of Real Money and the television show to support it, it would not be a very strong book on its own.

If you simply must read a Jim Cramer book about individual stock picking, read Real Money first. If you want more meat after that, then pick up this one.

I originally reviewed Jim Cramer’s Mad Money in five parts, which you can find

Jim Cramer’s Mad Money is the fifteenth of fifty-two books in The Simple Dollar’s series 52 Personal Finance Books in 52 Weeks.

Loading Disqus Comments ...
Latest from Trent
How Should You Prepare For the End of the CARES Act?
12 Things to Inspire You in July
3 Ways to Keep Going When You Feel Like Giving Up
Read more from Trent
Featured on: