Every other week, The Simple Dollar reviews a personal development, personal productivity, or entrepreneurship book of interest. 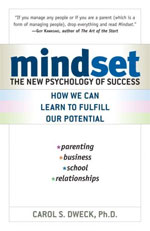 At first glance, Mindset by Dr. Carol Dweck seemed to be one of those pop psychology books that I usually avoid – another The Secret or The Power of Positive Thinking. Books along those lines just repeat the same ideas that are as old as the hills (or Napoleon Hill, at least) – if you think positively and visualize good outcomes, they’re more likely to happen. Great – but it’s a principle that doesn’t work without action and has been around since the dawn of time.

As I said, I originally lumped Mindset into that group of books, writing it off as more of the same on positive thinking. Then something interesting happened – two different people that I respect quite a bit recommended the book to me within a week of each other. One was a personal friend who said it really changed how he looked at his career and at his relationship with his girlfriend – which surprised me, since he’s not a person I would imagine would typically follow pop psychology talk. Perhaps even more surprising, Jonathan Fields, a blogger and writer I’ve exchanged a lot of emails with over the years, wrote a brilliant article entitled Is Gifted and Talented a Life Sentence? that really shook how I thought about parenting issues with my own kids. Interestingly, Jonathan also pointed strongly towards Mindset as a powerful source of inspiration.

When two people I respect suggest the same book completely independently within a week of each other, it’s likely a book I should make an effort to read. And I’m glad I did.

This is something I’ve come to believe in my own life, even before reading this book. The people that always seem to succeed are the people that are willing to really push themselves to the limit. Often, the person with the most natural talent doesn’t win the race – and for a long time, I didn’t understand why. This book (and the surprisingly similar Outliers by Malcolm Gladwell) explains it quite well. Let’s dig in.

1. The Mindsets
How do you feel when you fail?

Some people hate it, as they view it as a clear sign to the world and to themselves that they are, in fact, a failure.

Others love it. They see a failure as an opportunity to grow, to learn about the areas where they need to work, and to become a better, stronger person.

The first attitude points to what Dweck calls the “fixed” mindset. In other words, they believe that the person they are is already defined and the outcomes produced by that person are indicative of the person they are. They can’t change – all they can do is bluff and try to make who they are appear as good as possible.

The second attitude is the “growth” mindset. People who revel in failure recognize that a failure isn’t necessarily a poor reflection on them. Rather, it’s an opportunity to see where exactly they fall short and what exactly they need to work on. It’s a reminder not of where they cannot go, but an insight as to what they need to do to get there.

2. Inside the Mindsets
The difference in mindsets is interesting, but how does that really appear in terms of how people behave?

People with the “fixed” mindset often back away from challenges. They want to avoid hard things and prefer to thrive on easy things, things they know they can achieve. They also typically don’t like to read or learn, and they certainly don’t enjoy hard or deliberate practice.

People with the “growth” mindset seek out the challenges. They seek out the hard things in life and prefer to tackle things that push them and make them work hard, even if they fail at them. They usually love to read and learn, and they love practicing and improving at specific skills.

In an email exchange with a friend about this book, he stated it very well: “People with fixed mindsets get bored a lot. People with growth mindsets would give anything for a few more hours in the day.”

3. The Truth about Ability and Accomplishment
Here, the message of Mindset overlaps heavily with Malcolm Gladwell’s Outliers: the biggest key to success isn’t talent, but focus and practice.

To put it simply, the people that rise to the top of their fields do so because they keep working at it, keep growing, roll through the failures, and practice intensely and often. Kobe Bryant and LeBron James aren’t the two best players in the NBA because of their talent – they rose to the top because of their obsessive work ethics and focus on thriving even through adversity.

Although Dweck doesn’t mention it, I keep coming back to Gladwell’s example of The Beatles. If you listen to their earliest recordings – 1960 and before – they frankly weren’t very good at all (I probably sound better than some of their 1958 “Quarrymen” recordings). By 1963, they were amazing. By 1966, they were arguably the best songwriting and performing collective in the world. What happened? They played almost nonstop for years. They’d play for hours and hours each day in Hamburg nightclubs, then they’d play on their own when they weren’t on stage. They’d mess up songs, laugh it off, and try again – over and over and over and over. Eventually, they went from being the unknown Quarrymen (sounding like a bunch of kids beating on instruments – which they were) to recording albums like Revolver.

To put it simply, effort, not talent, puts people over the top.

Even more dangerous, labels such as talented and smart and skilled give people the opposite message. Hearing things like that tells people they already have the ability and that they don’t need to grow and work for it. The best positive feedback you can give – or receive – is one that complements you on your ethic or work effort, as it nurtures a growth mentality.

4. Sports: The Mindset of a Champion
Yes, we’ve all heard the story: Michael Jordan was cut from his eighth grade basketball team. He then practiced obsessively, made it to North Carolina on scholarship, and the rest is legend.

Michael’s early signals on basketball were that he wasn’t very good at it. If he had a fixed mindset, he would have simply quit after getting cut. Instead, he took getting cut as a giant motivator – he took that lesson and his own work ethic and made hay with them.

It isn’t just an ability to practice obsessively, either. When you reach the top, it takes character to stay there, and character only happens if you subscribe to a growth mindset. You’re not perfect – no one is. What sets the winners apart is that they recognize when they mess up, they accept that they messed up, and they work to make sure it doesn’t happen again.

5. Business: Mindset and Leadership
How do the mindsets work in a modern workplace? It’s pretty simple, actually.

A fixed mentality in the workplace features individuals seeking to make themselves look better at the expense of others. Gossip is a great sign of this. Projects where no one steps up to the hard tasks is another sign. A dominating boss who takes credit for everything is yet another sign. A workplace without people pushing themselves and helping others is a workplace that can’t produce amazing things.

6. Relationships: Mindsets in Love (or Not)
Ever been dumped? Some people take it well: they’re hurt, but they recognize that there were problems and that it’s time to move on. Others don’t take it as well: they slip into depression, get angry, and won’t let go of the relationship.

Every interaction is a chance for growth – or a chance to merely maintain some form of the status quo. Interactions that help people grow result in good relationships over time.

7. Parents, Teachers, and Coaches: Where Do Mindsets Come From?
When you are charged with helping someone else improve or grow, you have the ability to help them have a fixed mindset (likely not successful) or a growth mindset (potential for success). Teachers, parents, and coaches all have these opportunities.

What can such a person really do, though? Dweck compares the approaches of Bobby Knight (who demanded perfection at all times, yelled a lot, and led his players to a fixed mindset where they had to act as perfect as they could whether or not that’s what was really inside of them) and John Wooden (who never raised his voice, focused almost entirely on fundamentals and character growth, didn’t worry about perfection, and strove to produce great people). Both saw great success in college basketball, but Wooden produced more people that went on to do great things in the world – the true product of a coach.

Praise your children and students for their work ethic and their hard effort. Don’t praise them for their talents or the “greatness” of their end product. If they make mistakes, don’t tell them they’re worthless – instead, guide them into what they can learn from the mistake and encourage them to try again.

8. Changing Mindsets
What if you’re in a fixed mindset, but desire to have a growth mindset instead? The first step is to ask for help from those around you and listen to what they have to say. They’re going to criticize you – and that’s where your real decision happens. Are you going to listen to what they have to say and try to grow from that? Or are you just going to discredit or pooh pooh it?

Another key tactic: realize that the world doesn’t owe you anything. You may be naturally talented. So what? The spoils don’t just fall to the people with natural talent. They fall to the people who can do the job well, on time, and with reliability. You might be the best jazz flautist in the world, but if you don’t practice your pieces and ignore what’s going on around you, no ensemble will want you around.

Dweck offers quite a few similar tactics throughout this chapter, but these two really stood out to me.

Is Mindset Worth Reading?
I actually felt that Mindset covered much the same ground that Outliers did. They both stress something I’ve found to be an absolute truth in a life that’s successful in any dimension: talent is useful, but hard work and perseverance and learning from mistakes win the day.

Here’s the real lesson that Mindset hammers home very well, with lots of little ideas and tips to help along the way: you’re going to fail at some point. How you deal with that failure is what will make you either a success or a failure in life. If you meet that failure head on, accept the failure, don’t give up, and attempt to learn from it, you’ll succeed. If you avoid the failure and try to find excuses for it, you’ll likely never succeed.

The choice is yours. And if you find that distinction to be an exciting and interesting and useful one, Mindset is an excellent read.