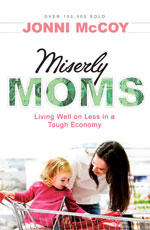 Miserly Moms by Jonni McCoy wears its target audience right on its cover – stay-at-home moms (or at least moms who devote a significant amount of time to domestic management) that are trying to maximize every penny. It’s a good read with lots of specific, applicable tips for domestic spending, particularly in terms of food and household supplies. The book hones in on these issues like a laser beam – though the cover of the book clearly aims for the stay-at-home mom, the contents of the book really apply to anyone – we all shop for groceries and we all need to eat, after all.

In other words, if you’re looking to maximize every penny on household expenses – particularly if you have a large household – this book is packed with advice. If you want stock investing material… you might want to go somewhere else.

Since the book is actually divided into thirty two short chapters, I’ve just pulled out ten of the points and principles that I thought were really thought-provoking.

Don’t Confuse Frugality With Depriving Yourself
Many people hear frugality and they have visions of eating a steady diet of ramen noodles and wearing fifteen year old clothes and never leaving the house while living in a hovel and driving a rusted-out 1978 AMC Gremlin. The truth is that frugality merely means being mindful of finding the best value in your own life and not just settling for the easy, thoughtless solution. As Jonni says on page 33:

If any money-saving activity makes you feel cheap or tight, you will eventually abandon your efforts. This is not the price we need to pay to reach our goals. I don’t need to feel tight and cheap in order to stay home with my kids. There are ways to save money and keep my dignity.

Well said, indeed. If you’re unhappy with a spending cut in your life, then don’t make it. The big trick with frugality is that many people never even think about it. They never ask themselves if they really are getting value out of that expense, or if a less-expensive option will do for them. Quite often, you can make a more frugal choice and never notice the difference (except for the gradually heavier wallet – don’t go frugal if you don’t want extra cash in your pocket).

Don’t Buy Everything at the Same Store
Jonni advocates finding the stores that have the cheapest prices on the various items that you buy, and I fully agree with that strategy. However, I think it’s possible to take that advice too far. I essentially use two stores for almost all of my grocery and household supply shopping – Fareway and Sam’s Club – with occasional stops at Walgreen’s if there are a number of exceptional bargains there.

The trick is simply being objective and finding the store or two that really does have the lowest prices on the items you buy regularly. Don’t obsess over grocery store flyers from every different store, because you eventually reach a point of real diminishing returns, where you dig through flyers for an hour to save $3.

Instead, just stick to the basics. Find a grocery store with low prices. Plan your meals carefully (and use the flyer as a tool). Make a grocery list from that meal plan. Then, go shopping and stick to that list. If you’re not doing these things already, switch to them and your food bill will drop dramatically – I wouldn’t be surprised to see a 50% drop.

Buy in Bulk Whenever Reasonable
Sure, buying whichever version of the item has the lowest cost-per-ounce is usually the best deal. But not always.

For one, if you don’t have adequate storage space, such excess items can easily get in the way. For another, if you’re not going to use the entire amount before it expires, then you’re wasting money buying the bulk version.

Another key point: storage containers. If you’re not reusing the containers you use to store items, you’re likely throwing money away. In other words, you’re better off over the long run putting sandwiches in small reusable containers than in Ziploc bags – even buying them in bulk doesn’t add up. This is a principle I remember my parents using when I was a kid – my father’s lunch was always packed with resealable small containers instead of with baggies.

Cut Back on Prepackaged “Convenience” Foods
The argument in favor of convenience foods is pretty clear – you’re paying a little extra to save time. However, that “little extra” is substantially more than you think at first glance.

Why? It’s a health thing. Prepackaged convenience foods are often loaded with preservatives and unhealthy ingredients like corn syrup and artificial sweeteners. Over the long haul, these things add up to additional weight, a lower quality of living, and additional health care costs. Instead of subscribing to a pattern of unhealthy convenience foods that cost more and contribute to poor health just to shave a few minutes, learn how to prepare your own healthy simple foods instead. For example, I can make an egg-white omelet sandwich with whole wheat toast in about four minutes for less than $1 (and put all dishes straight in the dishwasher) or I can buy an unhealthy breakfast to go for about the same time cost, a lot less health, and likely a higher cost, too.

Why do this? Cut back on the prepackaged foods!

Don’t Assume Something Saves Money
Jonni tells an interesting anecdote about her freezer on page 241:

The first thing I did to conserve energy in my kitchen was to get rid of the extra freezer I had. It wasn’t actually in my kitchen (it was in the garage), but I considered it an extension of my kitchen, as it held all my extra food. When the energy audit revealed that it was responsible for 15 to 20 percent of my utility bill, I questioned its cost effectiveness. I figured it was costing twenty dollars a month to run. At that time, that was 20 percent of our utility bill. I was buying in bulk and storing food in there, but the savings on bulk foods was being spent on the appliance to store them in.

It’s worth noting that many modern freezers are more energy efficient than this. We actually ran similar calculations on our own freezer and found that it was cost-effective for us, but it was closer than we expected. We also found that we were better off filling it to the brim, so we started filling up the extra space with ice – empty gallon milk jugs, rinsed and filled with water, then frozen.

Cut Back on Meats
I’ll admit it – I am currently thisclose to switching to being an ovo-lacto vegetarian. For example, today so far I’ve had a bean and salsa omelet for breakfast and a bowl of leftover vegetable soup for lunch, and I anticipate a vegetarian dinner.

Take beans, for example. They’re very healthy, they provide lots of protein, and they’re incredibly cheap. You can take a lot of meat recipes – especially those with ground beef – and just substitute beans, and the resulting recipe is quite tasty.

I never would have believed that I would find myself cutting back on meat so much, but there are lots of great, tasty, filling recipes out there that don’t use meat – and they’re almost always much cheaper than similar dishes that contain meat.

Have a Regular Soup-and-Bread Night
Pencil in one dinner a week for just soup and bread, nothing else. A big bowl of vegetable soup is incredibly easy to make (just boil up whatever leftover vegetables you have with a bunch of spices) and a bit of bread to soak up some of the juices and make the meal more filling is a great side.

Not only that, you pretty much can’t get a cheaper meal. Just take the vegetables you cook during the week and save the leftovers in a closed container in the freezer. If you’re like us, a nearly free and quite healthy meal once a week – especially one that can really be jazzed up with spices and peppers – is a spectacular deal.

Cook Several Meals at Once
A while back, I wrote an article

providing an example of preparing several meals at once. The central principle is absolutely true – preparing several meals at once and freezing the extras saves both money and time. The money savings comes in because you can buy ingredients in bulk – the time savings comes in because you have to do very little prep work for each meal once the extras are frozen, since you just pull them out and cook them.

Jonni offers a ton of examples on how to do this. My favorite is one that we’ve started using – just cook tons of chicken breasts at once. We cook several pounds of chicken breasts in the crock pot at one time. Then, we put two chicken breasts into a freezable container, pop several such containers in the freezer, then just pull them out when we need cooked chicken as an ingredient – salads, soups, and the like. Easy as pie.

Warehouse Club Wariness
This is one area of the book where my perspective differs from Jonni’s a bit. With regards to warehouse clubs (Costco, Sam’s Club, and the like), Jonni is extremely wary, arguing that on many items, the prices aren’t better than what you can find in other stores. I agree with her in this regard – as with any store, you have to have a good grasp on what you’re buying. In my own experience, however, I’ve found that many items are substantially cheaper there.

From there, though, Jonni makes several claims about warehouse clubs that oppose my own experience. She argues that they sell only store brand items and usually only sell one type of many items (dishwashing detergent, etc.). In my experience, there are usually several brands available for these types of items. Similarly, her shopping list of items that are good deals at warehouse clubs are a little confusing as well, since I’ve found that different warehouse chains tend to have different items with exceptionally low prices.

Your best bet? Figure out what’s really worthwhile at your local warehouse store. If it’s worthwhile for you, join up – it probably will be. Remember, the key is to get the items you want at the best possible value for you – and you may find that a warehouse club does that very, very well.

Make Your Own Gift Baskets
When it comes to gift-giving occasions, many people sweat it out and end up spending way too much on gifts. Jonni offers a different avenue: a themed gift basket pointed at an interest or life event of the recipient. This requires some planning, but since the basket is made up of little items (many of which are consumable)

This is a great encouragement to make batches of homemade items for weekend projects. We make homemade beer, homemade soap, homemade pasta, and homemade wine. Later this summer, we intend to make a few giant batches of salsa. All of these items will be used in part to make gift baskets – we’ll just package these items nicely, collect them together, and given them as gifts to family and friends, with different assortments depending on the person.

For me, I pulled out a few useful tips, but this book was not a world-changer for me. However, I can certainly see it being very valuable for some people I know, and I’ve already passed along my copy to a friend that’s also a stay-at-home mom. For her, Miserly Moms could very well be an invaluable read.