Each Friday, The Simple Dollar reviews a personal finance or personal productivity book. 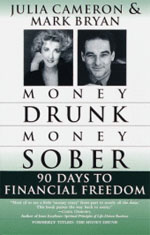 I had to dig through some very old emails to make sure, but it’s true: Money Drunk, Money Sober was the first personal finance book anyone recommended to me. It was in an email from one of my college mentors, sent to me just a couple days after my college graduation, where he had several suggestions for my personal success in life – and one was to read this book.

As I mentioned a few days ago, I think Money Drunk, Money Sober is a very good personal finance book. It’s short (about 200 pages, but the book itself is small so each page is pretty brief) and to the point while still offering some very insightful perspectives I hadn’t read anywhere else.

You already know I like it. Let’s dig in.

Part One: The Problem

Chapter 1: From Money Drunk to Money Sober
The premise of Money Drunk, Money Sober is that poor money management has a lot in common with alcoholism. When you don’t know how to manage your money, you’re drunk – stumbling around and doing things rashly and ineffectively. When you’ve got good money management skills, you’re sober. The transition between the two – breaking the “addiction” to bad habits – is like breking one’s addiction to alcohol – painful and uncomfortable all around.

Chapter 2: The “Drunk” in Money Drunk
Here, the profile of the “money drunk” is described, and it sounds familiar. Not only are really bad choices part of the mix (things like spending too much), but strong emotional ties to this behavior are there as well. Money causes giant mood swings, bringing elation one moment and depression the next. Money drunks like about their real financial situation to themselves and to others, and often bring anger and divisiveness to the table when money is being discussed.

Chapter 3: The Last of the Addictions
Money Drunk, Money Sober makes the case here that spending addictions are often tied to other compulsions, perhaps not even ones you can directly see. Some addictions are obvious – like an alcohol addiction – but others are more subtle. Perhaps you’re addicted to the act of shopping, or to a particularly engaging hobby. In any case, when you allow such an addiction to blind you, you often open the door wide to being “money drunk.”

Chapter 4: Growing Up Money Drunk
I think that, in some ways, I grew up “money drunk,” even though we didn’t have a lot of money growing up. Basically, Money Drunk, Money Sober argues that people who are “money drunk” often raise children that become that way, while “money sober” people raise “money sober” kids.

The scary part is, as I read these five profiles, I could think of at least one person that fit each profile.

Chapter 5: The Compulsive Spender
These are people who are addicted to shopping. They get an emotional rush from spending money and buying stuff, and when they haven’t felt that rush recently, they need to fill it. So they run out and buy some more stuff to feel that high.

Chapter 6: The Big Deal Chaser
Big deal chasers are the type who spend above their normal means because they believe a giant payday is just around the corner. They wear expensive clothes to make themselves look very important, but these items are far outside of what they can really afford – their psyche rests on the idea that these expensive purchases will help them to seem important and thus help them to land the “big deal” that will solve all of their financial worries.

Chapter 7: The Maintenance Money Drunk
Basically, these are people who are swept along with the flow of life, never able to stand on their own two feet and take care of things. They constantly blame events out of their control for their problems and thus don’t see any need to step up to the plate and take personal responsibility for things.

Chapter 8: The Poverty Addict
People who follow this route believe that a poverty-like state is the natural state of their life, so they naturally choose behaviors to reflect that state. They take pride in poverty, believing it is a more righteous way to live, so they often underprice their own skills and forget to claim monies that are theirs, for example.

Chapter 9: The Cash Co-Dependent
These are people who enable the bad choices of others. They themselves don’t buy into any of the above four mindsets, but they support and enable the people around them that do.

The second half of the book consists of a ninety day plan to “recover” from being money drunk. This is really the value of the book – it’s a great complement to the stuff I talk about in my 31 Days series. This plan is intended to cover a three month period, but many of the tasks here can easily overlap and it could be compressed into more time if need be.

Counting and Time Out: The Recovery of Clarity
The opening step is to take a serious accounting of your spending, and also to tell anyone who you owe money to that you can’t answer their plea right now, but you will be able to within ninety days.

Abstinence: The Recovery of Dignity
Interesting advice here. Basically, Money Drunk, Money Sober encourages a period of abstinence from all debt spending – if you need to buy something, use cash. Also, one should get some extra sleep and a bit of exercise. Why? The authors view kicking this habit as being much like kicking other psychological dependencies – you need to be of sound mind and body to give it your best shot.

Inventory and Keeping a Journal: The Recovery of Authenticity
A couple days ago, I mentioned this section in a discussion about asking yourself some deep money questions. The idea was inspired by this chapter, which encourages keeping a money journal and writing down your thoughts and notes in it. They offer a list of suggestions (pretty different from my list) for what to keep in it, but the idea is similar: keep track of what you’re doing.

The Bottom Line: The Recovery of Balance
Make a list of all of the bad behaviors you express in relation to money – and stick with the ones that are non-judgemental. For example, “not working hard enough” is judgemental – there’s no concrete action you can take there. Then, from that list, make a list of the concrete actions you can take from each one of the bad behaviors you listed. I love this kind of thing – setting short term goals is magic.

The Money Map: The Recovery of Accuracy
This step consists of the nuts and bolts of budgeting – making a list of all of your expenses and setting target numbers for each one. I find budgeting to be a very useful thing to do when you’re first turning things around, but budgets are like training wheels – they become a hindrance when you learn how to ride the bike.

The Resource List: The Recovery of Humility
Basically, the idea here is to look for help in your recovery. They advocate Debtor’s Anonymous and other similar groups, as well as talking to those you trust about your problems. True friends are people who will back you up through thick and thin – realize that and talk to them when you need their help.

The Money Buddy: The Recovery of Trust
The idea of talking to friends continues here – find a money buddy. A money buddy is a friend you trust who you can talk to about your money problems and your efforts to fix them and recover from the psychological blockages associated with them.

The Freedom Accounts: The Recovery of Character
Most people who wound up in a bad financial state, particularly people who were “money drunk” in some way or another, eventually show signs of bad character, usually in the form of letting someone down. Cameron and Bryan recommend confronting these shameful moments. Make a list of all of the people you’ve let down and make an effort to make amends. Apologize. Fix the damage you did (as best you can). Repay what you can. Face the music, and you’ll feel better about yourself.

The Prosperity Plan: The Recovery of Joy
Financial recovery doesn’t have to be incredibly boring. Most people go at it hardcore and thus burn themselves out. That’s a bad idea – don’t eliminate all of your spending at once. Instead, find things you enjoy doing/eating/etc. that cost less than what you’re doing now. Maybe you can take up a new inexpensive hobby, or perhaps you can start eating at home more.

The Time Grid: The Recovery of Self
Time management? A lot of people are surprised when such topics show up in a personal finance book (or blog), but I really believe the topics go hand in hand. Money management and time management are two sides of the same coin – because, in the end, time is money and money is time. Money is just a representation of how you spend your time – and in the end, time is what we really all value.

The Relapse Checklist: The Recovery of Compassion
All of us relapse at some time or another, falling back into old habits because they’re familiar to us. I sometimes spend money when I shouldn’t, even now, for example. Falling down every once in a while, though, isn’t irrecoverable – you just need to spend some time understanding what went wrong and how you can fix it.

Spirituality: The Recovery of Peace
This is a big dip into the spiritual nature of money, particularly Christianity. This chapter would fit in well in a Christian book, but it’s the only place in the book where spirituality is really discussed. I agree with the ideas here, though – spirituality and faith can play a big role in recovery and personal growth.

Vision: The Recovery of Hope
In a nutshell, dream. I’ve talked to a lot of people my age over the last year and I’ve found one thing in common: most of them don’t really dream. They used to dream when they were younger, but somehow they’ve moved on to think that dreams are childish and they’re not part of the “real world.” Don’t let that happen. Ever.

I thoroughly enjoyed Money Drunk, Money Sober. I found that it covered the principles of personal finance that I agree with in a very succinct and clear way and introduced a lot of self-analysis angles that I hadn’t considered before. It really made me think about money in new ways, and after having read so many personal finance books over the last two years, that’s something of a rare thing to find in a personal finance book.

This one is definitely worth reading, especially if you put any value into introspection. That’s really the theme here, especially throughout the second half of the book – what answers can we discover through looking at ourselves?

This book is several years old and has been in paperback for most of a decade, so it will probably be easy to find at the library or on PaperBackSwap, or it can be found for pretty cheap on Amazon. Whatever small investment you make in the book, it’s worth it – Money Drunk, Money Sober is really a hidden gem.

Loading Disqus Comments ...
Latest from Trent
How to Find Your Financial Comfort Zone
Try This Systems-Based Approach to Personal Finance
Should You Save For Retirement Before Paying Off Debts?
Read more from Trent
Featured on: