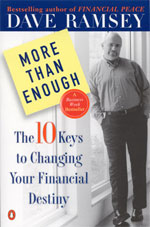 In the past, I’ve reviewed Dave Ramsey‘s other books, The Total Money Makeover (which I really liked) and Financial Peace Revisited (which I felt was so-so). They both have a similar tack, however, in that they’re both all about Dave Ramsey’s personal finance philosophy – get out of debt before doing anything else.

More Than Enough is a bit different, however. From the back cover, “In More Than Enough, he gives us the keys to building wealth while also creating a successful, united family.” This is an interesting tack to take, one that has me interested as I’m watching both my family and finances bloom.

Does the book offer any interesting and concrete advice, or is it a mere repeat of Dave’s personal finance information? Let’s find out!

Looking Deeply At More Than Enough

Right off the bat, I get a slight negative vibe from the paperback version of the book – the typeface is enormous. This means that each page has maybe a third as many words on it as other books, which means that if this book were printed like other books, it would maybe be eighty pages long. His other books did this as well, but not as obviously as More Than Enough.

The book centers around ten principles that will change your financial destiny, as touted on the cover. The ten principles are rather psychological in nature, but Dave’s style is very clear-cut and grounded, so he does a good job of tying them to life experiences. These ten principles are addressed in chapters two through eleven in the book.

1 – More Than Enough What?
This chapter basically reveals the meaning of the title – it’s not more than enough stuff, but instead more than enough of a sense of fulfillment and purpose in life. The book uses a metaphor that a life is like a mansion with many rooms and some of them are locked, and it’s only through a journey of self-examination that we are unable to lock more rooms. Thus, he ends each chapter with a “key” or two to unlock rooms. It’s an interesting metaphor, at least.

2 – The Missing Link
The first principle is values. In other words, what’s the intrinsic right and wrong inside of you? What things do you do that seem right, and which things seem less so? He goes through a series of exercises and examples, but the real key part is his simple exercise of sitting down and thinking of those right things and those wrong things. Then, spend time minmizing the wrong things and maximizing the right ones.

3 – Victory Through Vision
The second principle is vision, which directly leads to goals. What do you imagine for your future? Can you describe it in detail? Spend some time trying to do just that, imagining what you would like to see at various points in your future and your family’s future. Then, take those visions and try to describe them in terms of concrete goals. What do you have to do in order to get there?

4 – The “You” In “Unity” Is Silent
The third principle is unity. Basically, it’s making sure that the goals you define for yourself are in sync with the goals that your spouse and other family members may hold. Especially your spouse. I found that sitting down with my wife a few times to talk about goals has been incredibly valuable in regards to putting us both on the same page and authentically feeling like we are really working together in many aspects of life.

5 – Hope: Balm For The Soul
The fourth principle is hope, which is basically the outgrowth of the meeting of goals and unity. A goal lets you envision the future, and unity gives you support as you move towards the goal. Together, they give you hope that you’ll get there, a true belief that things will get better.

6 – Accountability: How To Get An A In Conduct
The fifth principle is accountability. Once you have a goal in mind, support in getting there, and hope for accomplishing it, you’re much more capable of taking on responsibility and holding yourself accountable for the financial moves that you make. I find this to be powerfully true – it’s much easier to pass the buck on small mistakes if you’re not working towards a larger goal.

7 – Intensity: Feeling The Fervor
The sixth principle is intensity, and this is something I really, really agree with. Intensity is something that happens when you have goals and unity and accountability, a triumvirate that occurred inside of me after the birth of my first son. Reading this chapter rang a real bell inside of me because it reminded me of almost going bankrupt after his birth and feeling everything start to come together after that. It was intense – I finally felt like everything was in alignment and it was a real rush.

8 – Good, Better, Best: Work, Discipline, Diligence
The seventh principle is work, discipline, and diligence. Again, this struck home for me – once that rush of intensity happened, I began to see that there was a lot of work to be done and that I needed to be diligent about it. It’s not enough just to decide not to spend money for a day – you’ve got to stick with it over the long haul.

9 – Patience Is Golden
The eighth principle is patience. Once the routine of work and discipline and diligence becomes entrenched, it can often feel like a slog. Be patient. Realize that success won’t happen in one day – it takes time to eliminate all of those debts and put yourself in a better place. Something that requires work and diligence but that also has a timeframe in years absolutely requires patience – thankfully, you have that unity and support to rely on.

10 – Looking For Love In All The Wrong Places
The ninth principle is contentment. Mostly, it’s a discovery along the path of life of the things that really matter in life, much like

the “center” idea I mentioned earlier. For me, it was my family. They bring me contentment – I feel much less of a need to spend frivolous money when my son is making faces at me out of the door of his cardboard castle.

11 – The Great Misunderstanding
The tenth and final principle is giving. What’s the titular “great misunderstanding”? It’s that the road to personal finance success is all about personal gain and wealth. In fact, it’s about giving you the tools to improve the world by giving to others and helping society out. Take the fruits of your success and give some of them to others so that many may benefit from your journey.

12 – The More Than Enough Road
So what’s at the end of this road? Wisdom. The life experiences along this path make you wise, and you also now have appropriate financial tools to make healthy choices with.

This is a tough one to recommend, so let me put it to you very clearly: if you want to read a Dave Ramsey book, skip this one and just read The Total Money Makeover. That one is clearly his best book and very much worth reading – it’s definitely the one to read if you want to get a healthy dose of the Dave Ramsey personal finance philosophy.

More Than Enough is a very different sort of book. It focuses entirely on internal issues, tying together personal character development and personal finance. The problem is that Dave’s skill is in bringing across the more tangible parts of personal finance and this book focuses largely on more intangible issues.

More Than Enough is not a bad book, and it is definitely the second one you should read by Dave after The Total Money Makeover, particularly if you have a family. Just be aware that it’s much lighter on the personal finance aspects and heavier on the character aspects, making it an interesting companion to Ramsey’s other books but perhaps not particularly strong on its own.

More Than Enough is the forty-first of fifty-two books in The Simple Dollar’s series 52 Personal Finance Books in 52 Weeks.