Review: Never Wrestle With A Pig 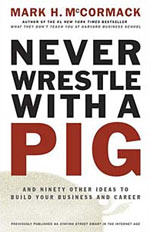 An old friend of mine loaned me Never Wrestle With A Pig in the mail recently, with a little Post-It note that said “This is the best career advice I’ve ever read, even if I don’t follow all of it.” That note intrigued me, and I dove into the book headfirst.

Never Wrestle With A Pig by Mark McCormack offers up a ton of specific points of advice for building either a management career or your own business. In either case, the book basically assumes that the goal is to be in charge of some sort of organization. It also assumes that you’re just getting started in this process – big dreams, but not a lot of success yet. In other words, it speaks very well to a lot of people in their twenties and thirties.

But not to me. I’m not quite part of that target audience, as I don’t have any deep interest in management. I’m much more interested in self-employment or perhaps a very small business with just one or two employees. Does the book still hold something for me? If it does, it’s a pretty good read for any young person with goals – if not, it belongs just in the hands of people shooting for Let’s dig in and find out.

The Ideas Within Never Wrestle With A Pig

Most of these sections had many interesting points worth noting in them. Rather than having this summary turn into a book itself, I tried to pick the single most interesting point from each one and discuss it.

Giving Yourself A Reality Check
The book opens where it should, with the realization that you have to work hard to make it happen. Hard work underlines everything, and the moment you start slacking off is the moment you lose. My favorite point is that if you’re relying on luck to carry you through something, it probably won’t work – instead, your time should be spent making your position “luck proof.” Make sure all of your bases are covered as well as you can, and also go the extra mile to show that you’re a valuable part of the organization.

Speed, The Defining Factor
McCormack addresses time management here, making several astute points. The biggest one – and the one that I see many people not actually doing – is to set a very strict time for leaving work and sticking to it. Doing that ensures two things: one, that you have adequate time for personal growth and rest so that, two, during the time you’re actually there, you can be highly productive. I’ve seen people burn the midnight oil quite often – it works fine for a little while, but they usually wind up exhausted, underproductive, and bitter about things, none of which are helpful for your career.

Giving the Workplace a Reality Check
Most workplaces are dysfunctional in some way or another. They often reward being a “yes man” over being a valuable employee, encourage people to work less and network more, and discourage honesty and candor. Most of those effects, if seen, are indications that something is amiss at work. Another great sign: a consistent desire by everyone to minimize their workload and pass the buck. In fact, it’s much better to try to fill your day with work (but not overfill it). That way, you’re constantly producing – and that production will get noticed. It’s fine to foster relationships, but without the production to back it up, it’s not that valuable.

Office Politics
For many of us, office politics are a fact of life, especially when most of the people involved have the same goals: success, raises, and promotion. There are only so many slots to go around and only so much money that can be given for raises, so we compete – and that creates office politics. Many Machiavellian folks will encourage you to “keep your friends close and your enemies closer,” but McCormack offers another solution: focus on and cultivate friendships. The more friends you have in the workplace, the more likely that absurd backstabbing tactics will fall flat on your face. I personally live by this and attempt to befriend everyone at work – not just the people at roughly my same level, but people both above me (management) and below me (janitors, administrative assistants) on the hierarchy. I’ll gladly chat with the janitor for a while or help the secretary change printer paper, because I’ve come to realize that these people are often information brokers at work and it’s very worthwhile to be on their good side.

Acquiring a Power Base
This section may as well be called “How to Play Well With Management,” because that’s the focus here. Most of the advice makes a great deal of sense, but perhaps the most valuable piece is to not let your intelligence become a hindrance. Sure, you might be the person in the room with all the answers and you also might often recognize that others are throwing up suboptimal ideas, but it never pays to be the “smartass.” Don’t surround yourself just with other smart people – for example, if you’re in IT, don’t just surround yourself with the IT folks. Never brag, and never overcomplicate anything – try to make things as simple as possible for others to understand. When you get feedback, even if you think it’s wrong, accept it – it’s often a hint that something you’re doing is wrong, even if it’s misdiagnosed.

Promotions, Demotions, and Other Career Hiccups
The basic advice here is that the promotion game often isn’t fair and that your best weapon for playing the game is to persevere. Don’t give up, and don’t panic. Instead, constantly look at yourself and figure out what you can be doing better. Nothing is bad enough that it can’t be recovered from, and even a demotion is not the end of the world. The key is to constantly seek improvement, especially when you see signs that promotions and rewards may be going to others.

Rules for Deal Makers
This information mostly applies to people who are in sales or in upper management – people who need to make deals with other people and other organizations. Given that, there are still some tips that anyone can use. For instance, in a normal meeting (one where no one is directly presenting), you should never do the majority of the talking – if you do that, it will make you look bad, even if you’re saying the right things. Instead, let others talk and use just your best points – quality over quantity earns respect.

When You Are In Charge
What about when you’re actually in charge of a situation, and it’s your call? This section offers a lot of specific advice on various situations, but I found the hiring advice to be the most compelling. In a nutshell, the key to good hiring is to really understand what you want. Let’s say you’re hiring a programmer. Is that person just going to be churning out simple code, or is that person going to be solving large problems? There’s a big difference there – two very different skillsets under the same job description. The first one should have programming language skills all over their resume, but the other one should be able to solve a thinking puzzle right in front of you. Know what you actually need before you hire.

Etiquette for the New Millennium
The book closes with a few general etiquette tips, the strongest of which I hinted at earlier: be nicer to your subordinates and tougher with your superiors. Why? People generally thrive on respect and kindness from people above them in rank and will often produce better if given that respect. At the same time, people don’t like brown-nosers – there’s no need to be rude to superiors, but simple respect goes a lot further than bootlicking ever will.

Never Wrestle With A Pig is a great book to read if you’re in the early stages of your career, trying to find that right balance of time and work and networking. It offers a lot of solid career advice in digestible little pieces, perfect to stick on the bedstand and read one or two a night before closing your eyes. Even better, unlike many books that are filled with so many small pieces of advice, most of these are action-oriented – it’s pretty clear what action follows the advice and the rationale for that action.

That being said, none of this advice is world-shattering, either. It’s strong, sensible advice that includes pieces that will help with your career, but it’s not a “sea change” book like Getting Things Done or Never Eat Alone.

Check it out from the library, put it on your nightstand, and read a little piece at a time. Let those ideas simmer in your head, and see what comes out of them. What you’ll probably find is that the catalyst for jump-starting your career is already inside you, but it just took a little nudge for it to come out. Never Wrestle With A Pig can definitely be that nudge.