Review: On Becoming a Leader

Every other Sunday, The Simple Dollar reviews a personal development, career, or entrepreneurship book. 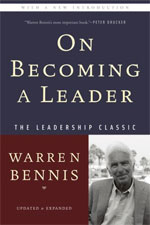 Knowing how to be a leader – and using that skill from time to time – opens doors for you no matter what you’re doing in life. It helps your career. It helps your social standing. It creates a positive reputation for you, one that often precedes you. It can even help your family life and personal friendships. In short, leadership can be truly rewarding.

The problem with leadership, though, is that the vast majority of people don’t know how to actually be a leader. For a small number of us, leadership comes easy – a natural extension of who we are. For the rest, though, it’s not obvious at all. We’re held back by our own seeming desire for simplicity (though, sometimes, it’s simpler to lead) and our own lack of self-confidence or sense that we’re not leaders at all.

A long time ago, I was forced into a leadership position on a project that I felt completely unprepared for. A very kind friend in a high place mailed me a copy of this book – Warren Bennis’s On Becoming a Leader – and encouraged me to give it a read. The ideas in this book helped me to step up and actually make the most of the situation as it was handed to me and, since then, I’ve recommended it to several others (as I did in a recent Reader Mailbag, actually).

What makes this book so compelling? Let’s dig in and take a look.

Mastering the Context
Every situation in which one is called to be a leader has some sort of context. The people involved are part of the context, as are the specifics of the situation. Quite often, leaders become too tied to the context of the situation and, as a result, come up with pretty poor leadership decisions. Bennis offers several good and bad examples of how leadership can be destroyed by context. For me, the most potent example was the presidency of George W. Bush – in the context of his political ideology and of the disaster of 9/11, he made choices that were perhaps not the best leadership choices for the United States (I don’t think anyone would argue, whether they be liberal or conservative, that mistakes were made during the Bush years). A positive example of stepping outside of context is Norman Lear – the creator of the seminal sitcom All in the Family. He took the context – sitcoms of the 1960s – and looked not at a situation full of rules, but instead a situation where many of the rules could be broken. That’s what a leader does – he finds ways to break away some of the context, opening up new areas for success. (Incidentally, I think this is why great leaders also have a big dash of creativity.)

Understanding the Basics
Here, Bennis identifies a pretty large handful of traits one will find in a leader: a guiding vision, passion, self-knowledge, candor, maturity, trust, curiosity, and daring. Bennis argues that most of these traits are not ones people are simply born with – they’re usually self-made by a person who pushes themselves and wants to excel at leading others. He goes on to distinguish that there’s a big difference between merely being a manager and being a leader – in fact, he argues that, quite often, an MBA makes a person a good manager but a pretty poor leader. A manager manages and maintains the status quo – a leader leads people somewhere great.

Knowing Yourself
In order to lead, you must know yourself intimately. You have to know what you’re truly capable of and what you must ask others to help you with. Without such intimate self-knowledge, you can never effectively lead because you’re incapable of understanding how to select people to fill the roles you most need filled. Bennis points towards four key lessons one must learn in terms of knowing oneself:

You are your own best teacher. Pay attention to the things that work for you and don’t work for you. Don’t listen to what everyone else says – try things for yourself and see if they fly.

Accept responsibility. Blame no one. If something goes wrong under your watch, it’s your fault, period. Don’t blame others for it – step up and take responsibility. Yes, you can make moves to make sure that this doesn’t happen again, but the failure is your responsibility if you’re the leader.

You can learn anything you want to learn. Knowledge can be acquired by anyone if they’re persistent. Don’t use ignorance as a crutch. Instead, accept that you are ignorant about some things and step up to educate yourself.

True understanding comes from reflecting on your experience. Look back at what you’ve accomplished and try to figure out how you accomplished it. Similarly, look back on your failures and determine what you did wrong to cause that bad result.

Knowing the World
Almost all of the worthwhile learning that people do comes outside the classroom. It comes from losing yourself in an experience, reading books because you want to read them, trying new things because you want to try them, and reflecting on all of this stuff, adding it to your tool belt. People who choose not to do this are actively choosing not to be leaders – they’re happy being managers.

Read a book. Travel. Meet new people. Build a friendship. Find a mentor. Mess something up. You learn from these things, not from rote memorization in a classroom.

Operating on Instinct
Every decision we make in life is based on incomplete information. At some point, we have to decide that it’s good enough and go ahead with whatever decision we have at hand. Our ability to still make good decisions even with incomplete information relies on instinct – a sense of what the right decision is that comes from inside. Often, that voice inside of us is built out of a lot of learning about the world, a lot of experience of both success and failure. Learning trains our instincts so that we can make better decisions with less information.

A leader, in the end, is a person others rely on to make the difficult decisions and set the direction for everyone. A well-honed instinct is key to being that kind of leader, and a good leader relies on and trusts that voice inside of himself.

Deploying Yourself: Strike Hard, Try Everything
Every single one of us fails in life. The difference between leaders and others is whether or not they pick themselves up and try again. Do you face your fears? Do you again try the things you failed at in the past, or do you avoid them like the plague? If you try something and it goes badly, do you avoid it in the future or do you relish the challenge of improving in that area?

To put it simply, a leader does not back down from a challenge. They don’t allow fear to control what they do. Instead, if something is scary or deeply challenging, it’s something they focus even harder on achieving.

One particular quote at the end of this chapter really struck me.

The means of expression are the steps to leadership:

In other words, it all begins with reflecting on your successes and failures and building from there.

Moving Through Chaos
It’s often thought that leaders don’t have the same crises that we do. We think they don’t have to deal with office politics, layoffs, demotions, fighting for promotions, and so on. We think they view the world as a set of chess pieces to play with as they wish, that “strategic vision” means playing games with people.

In truth, most leaders had to overcome a great deal of career adversity to get where they’re at today. The only difference is that, at every opportunity, they took the opportunity to try to grow as a person and improve their instincts instead of complaining and commiserating about their hard luck. A trial by fire can either burn you or forge you – leaders are forged.

Getting People on Your Side
The key to getting people on your side is to be trustworthy and to constantly show that their trust is well-founded. Bennis identifies four key elements of such trust.

1. Constancy. You stay the course for the people that rely on you. When problems come, you handle them, but through it all, you maintain a steady direction and don’t descend into chaotic behavior.

2. Congruity. If you say something, you mean it, and it shows in your actions. If you expect something of your followers, you expect it of yourself first and you follow through with it.

3. Reliability. When it really counts, you’re there for the people who need you.

4. Integrity. When you make a promise or a commitment to someone else, you follow through with it.

Organization Can Help – or Hinder
There are times in which the group you’re intending to lead simply will not be led. If the people involved don’t care or they have a completely different direction in mind than the one you’re providing or the bureaucracy in the system is so intense that no amount of bushwhacking will clear it, no leadership can help the situation.

The question comes down to whether or not you personally find it valuable to work on your leadership skills. My perspective is that most lives have avenues that can be improved through leadership – it helps you build better relationships with others in the workplace, in the community, and in one’s family if they’re able to step up and be a leader when the situation calls for it.

The Simple Dollar has reviewed hundreds of personal finance, personal growth, and career books. Please check out the full list of Simple Dollar book reviews, alphabetized for your convenience.