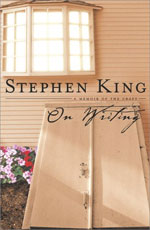 Many of you might be quite surprised that I would review a book by Stephen King under the guise of a personal productivity/personal development book, but if you’ve ever read On Writing: A Memoir of the Craft, it makes a lot of sense.

On Writing is Stephen King’s attempt at writing a book about, well, how to write. Along the way, though, he touches on a lot of different interesting areas that are well worth looking at from a productivity standpoint – after all, this guy can crank out two or three bestselling novels a year, so he must know something about productivity. Even better: King knows how to write for the entertainment factor, so this book is substantially more entertaining than other books on how to write productively.

Is there enough under the hood to make this book worth reading for a person looking to improve their writing or communication skills, or is this one for pure entertainment only? Let’s dig in.

Digging Into On Writing

C.V.
The first portion of On Writing is mostly an autobiography of King and his development as a writer. It’s a collection of well-written, short anecdotes from his life, focusing on particular points where his writing skills grew or life dealt him a hand that led him in the direction of writing. While this section is perhaps the most entertaining for a general audience, it is the least useful for someone looking for advice on writing; thankfully, the rest of the book has a lot more meat on the bones.

Toolbox
Here, King gets down to business, offering up tons of specific points on the actual written word, tips that are quite useful. I’ve extracted a good handful of them here – at least the ones that really rang true for me.

Don’t worry about perfect grammar or a great vocabulary. The goal should always to make the sentence as readable as you can for your audience, so if you’re writing for a general audience, don’t use complicated words or complex sentences. After all, Steinbeck and Hemingway rarely used multisyllable words.

Read Strunk and White’s The Elements of Style and follow that advice thoroughly. King is an enormous fan of this book, which is basically a short pamphlet (less than 100 pages) on how to write effectively and succinctly.

Use the first word choice that comes to mind. King basically argues against using a thesaurus, arguing that instead most people tend to make the right word choice first. In general, try to use simple, flavorful words instead of dry and complicated ones, something that works well no matter what topic you write about.

On Writing
From there, King moves on to discuss the process of writing – in fact, he goes so far as to say that if you don’t read a lot and write a lot, you shouldn’t be pursuing a writing career. Here are some of the more specific suggestions.

Read several hours a day – and read good stuff. He offers a lot of suggestions, but mostly he recommends really well written short stuff or novel/book-length materials. For my reading diet, I read The Atlantic and The New Yorker and I try to read a few books a week.

Write a certain amount every day. King suggests 2,000 words – at least, that’s what he does. Set whatever number you decide on as your goal. Some days it can be very hard – other days, very easy.

Find yourself a place to write. Then, use that place exclusively for your writing. That way, that place becomes associated with your writing mindset.

Be honest. If it doesn’t feel true in your heart, don’t write it. That doesn’t necessarily mean that it’s factually true (fiction, for example), but it does mean that it seems reasonable. Imagine the characters alive, then ask yourself truthfully whether they’re acting realistically.

When you write something, put it away for a while before editing it. Unfortunately, I often don’t do this with entries for The Simple Dollar (in my mind, The Simple Dollar is more appropriate for urgent and fresh idea-oriented pieces, not polished and finished ones), but it is a very good idea for finished pieces. Write them, then put them in a box for a long while before getting them out to edit. That way, the freshness of your mindset from writing it wears away and it reveals the actual flaws in the writing.

There’s a lot more meat in this section. In fact, I re-read this section and the previous one about once a year to inspire myself.

On Living
The final section returns to the autobiographical nature of the opening section, discussing the 1999 incident in which King was struck by a van while walking along the road near his home. This accident nearly killed him, and he discusses with great candor the accident itself and the painful recovery. While it’s fascinating material, it almost feels as though the first and fourth sections are one book while the second and third ones are another book – and the two “books” have been smashed together into one.

Anyone who writes on any sort of deadline should read this book. This includes anyone who writes a blog, writes professionally in the workplace, or is in the business of writing book-length works. On Writing goes beyond being just a book about how to put words on paper and almost becomes a personal productivity and inspirational guide to those of us who write.

On the other hand, if your livelihood does not involve writing for deadlines, you can probably skip this one, though it will make for some entertaining reading. For me, the first portion (“C.V.”) was perhaps as good as any King novel and I gulped it down in one sitting. However, it was the second (“Toolbox”) and third (“On Writing”) that really influenced how I thought of myself as a writer.