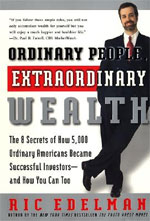 I’ve been hesitant to review a book by Ric Edelman for two big reasons. First of all, he’s always given off a very strong “I’m a salesman first, an advisor later” vibe – he comes off as a person selling you a product, not a person helping you with advice. Second, every time I’ve dabbled into one of his books, I’ve quickly come across something that’s made my eyebrows shoot up not in a good way – I’ve seen things encouraging people to get into debt and that’s been enough to get me to close the covers.

Yet I often receive emails from readers asking me about Edelman’s advice. “Does he make sense?” “You should review one of his books.” Thus, I decided to give Edelman a fair shake. I headed off to the bookstore, browsed a handful of his books, and selected Ordinary People, Extraordinary Wealth, as it seemed on the surface to be the most interesting one.

Ordinary People, Extraordinary Wealth pledges to contain “the eight secrets of how 5,000 ordinary Americans became successful investors – and how you can too.” Intriguing subtitle. I can’t wait to dig in, so let’s get started.

Secret #1
They carry a mortgage on their homes even though they can afford to pay it off.
Edelman basically argues that the concept of a mortgage being a bad thing is a relic of the 1930s, where banks would foreclose on a house on a whim, and the negativity associated with mortgages has hung around this long even though there are a lot of protections for the borrower today.

In a nutshell, Edelman says that having a mortgage with a low interest rate is a very good place to be, indeed, as you can instead use your money for better investments. He very clearly believes in the concept that you shouldn’t pay ahead on your mortgage, but that you should use the money you’d pay ahead to invest.

Secret #2
They don’t diversify the money they put into their employer retirement plans.
The subtitle struck me as quite odd at first, as it seems to fly in the face of common sense. Edelman’s advice, though, is actually pretty common – put your retirement money into a diversity of stocks. In other words, select an index fund or two of stocks in your retirement plan and just dump all of your savings into it.

The subject is actually referring to the idea that people might be way too conservative with their retirement money in fear of losing it in the stock market. However, if you’re investing in a natural diversity of stocks over the long haul, your returns will be very good. Plus, by investing in drips and drops over time (a bit each paycheck), you’re effectively implementing dollar cost averaging along the way, protecting you somewhat from a big downturn in the wide stock market.

Secret #3
Most of their wealth came from investments that were purchased for less than $1,000.
Basically, Edelman states that people who became wealthy did it not by having a ton of money right off the bat. Instead, they just invested a little bit at a time – less than $1,000 a pop. They just did it regularly.

This is something that most people can do – invest $200 or so a month into an index fund and just let it sit there until they need it. By doing this over the long haul, you can build some tremendous wealth by riding the natural growth of the value of your investments.

In other words, figure out what you’re going to invest in to begin with, then just steadily invest in that in small increments. This, again, is pretty sound advice – you avoid the costs of brokerage fees and just ride through with the same investments. If you pick some intelligent diversity right off the bat, all you have to do is just stick with it and keep investing over time and you’ll be fine.

Mind Over Money
There’s a section in the middle of Ordinary People, Extraordinary Wealth that focuses on psychological traps that people fall into when investing – things like relying on hindsight too much and so on. If you find this type of material interesting, Eric Tyson’s Mind Over Money (which I reviewed a while back) provides thorough and readable coverage of the connection between psychology and money management.

Secret #5
They don’t measure their success against the Dow or the S&P 500
Instead of using various metrics like the NASDAQ to judge their investment success, they look instead at whether or not their investments are actually achieving the results they need in their life. So what if the S&P 500 has an up or a down day? What’s actually important is that your investments are giving you the returns you need.

I agree with this logic. I think it makes a lot of sense to use your own goals as the only milestone for success. If you spend all of your time chasing the market, you’ll always be dissatisfied and you’ll always believe you can be doing better. Maybe you can, but is it really worth the risk if you’re already achieving your goals?

Secret #6
They devote less than three hours per month to their personal finances.
I think this concept relates very well to the “training wheel” concept I talked about a while back. Basically, Edelman is correct in stating that the people he’s talking about do spend three hours or less a month on their personal finances, but these are people who already have a firm grip on their financial state.

In other words, this isn’t an invitation for people struggling with debt to not pay some serious attention to their money – it’s merely a confirmation that when you’ve got it all figured out, it doesn’t require a tremendous amout of focus.

Secret #7
Money management is a family affair involving their kids as well as their parents.
If there’s one point that Edelman really hits out of the park in this book, it’s this one. You’re doing nothing but hindering your children’s financial education by keeping them oblivious to money. At the same time, you’re also potentially setting yourself up for a nasty surprise if you don’t involve your parents in the financial discussion as well – not only might they have insights, but you might have insights for them as well.

In both cases, conversation is the key. If you’re having difficulty talking to your parents, a great book to look at is Charles Schwab and Carrie Schwab-Pomerantz’s It Pays to Talk; similarly, an excellent book on relating to your children about money is David Owen’s The First National Bank of Dad. Both provide essential advice if you’re looking for ways to get started, but Edelman gets the basic piece completely right – starting the conversation is the key part.

Secret #8
They differ from other investors in the attention they pay to the media.
In other words, they ignore the talking heads on CNBC or the thousands of stock tips floating around out there for the most part. Why? Because it’s information overload and it’s not particularly useful to most of the people Edelman interviewed for this book.

Instead, what little financial reading they do is from reputable sources – The Wall Street Journal or The Economist or BusinessWeek – and they generally don’t even directly apply that information to their financial planning. They just keep going along with what they’ve always done, steady but sure.

I have deeply mixed feelings about this book. I’ll use Clint Eastwood as my inspiration as I break it down.

The Good Edelman’s advice is quite good throughout the book. He tends to believe in the value of debt and leverage a bit more than I do (or many other personal finance writers do), but his ideas are sensible and are actually based on substance. His writing has a nice conversational tone, too, and if you find personal anecdotes to be powerful, this boat is loaded down with them.

The Bad More than half of this book consists of very brief half-page testimonials from people that Edelman’s financial advising firm has helped. It’s nice to see reinforcement of the principles, but when you strip away all of this, there’s only about ninety pages of content in this book.

The Ugly Edelman goes down the Robert Kiyosaki road and tries very hard to sell his other books. All. The. Time. Half of the footnotes that I checked were merely pitches to buy other Edelman books or allusions to try using his financial advising services. At times, it felt like a sales brochure for Edelman’s firm – not a good vibe to give off.

If you take the basic advice, skim the testimonials, and ignore the footnotes, this book has some very useful information inside. Unfortunately, by ignoring that stuff, you ignore about 80% of the book’s total word count. In other words, this is a great book to browse, but not necessarily a great one to buy.