Every other Sunday, The Simple Dollar reviews a personal finance, personal development, or entrepreneurship book. 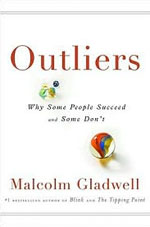 Ever wondered how exactly someone becomes world class at something? What exactly does it take to go from being ordinary at something to attaining great heights? Is it talent or a huge amount of persistence?

Outliers (subtitled The Story of Success) by Malcolm Gladwell takes on those very questions. Most people tend to attribute great success to a mix of talent and ambition, but Gladwell argues that the truth path to success really doesn’t rely on either one of these factors, but instead relies o a pretty sizable collection of other factors.

Before I even started reading this book, I was aware of the chief criticisms of it: that it was mostly just a survey of literature on this topic and that it didn’t really bring a whole lot of new ideas to the table. What I actually found when I read the book for myself is that it was a pretty interesting synthesis of a lot of ideas on success, and that Gladwell has a knack for making some of the mundane pieces of the picture quite interesting. In short, I found the book fascinating, and I also found it to be a great starting place for additional reading.

Interested? Let’s dig in and see what Gladwell has to say about Outliers.

One: The Matthew Effect
Gladwell opens the book with an examination of what it takes to be a top athlete in the prep leagues of various sports, and he discovers an interesting correlation: most of the players who make top-level prep teams (“all star” teams) tend to have birthdays within a month or two of each other. For example, over half of the players that performed well in junior hockey in Canada have birthdays that fall in January, February, or March. In other words, the players that have been selected purely by merit as the best hockey players are strongly predisposed to having birthdays in those first three months of the year, with January being the dominant one. Why? January 1 is the cut-off date for junior hockey, which means that children with birthdays early in the year have a big size and maturity advantage over kids with birthdays later in the year. Imagine a child born on January 1, 2000 competing against a child born on December 15, 2000 – the first child has almost a year’s worth of maturity advantage, which can more than make up for an actual skill advantage. Eventually, over time, the more mature children are selected as having “potential” and thus receive more coaching, which actually does make them better.

The more important (and interesting) part of the chapter, though, discusses the huge role that nearly-obsessive practice plays in making people great. Gladwell uses The Beatles and Bill Gates as examples here, showing how they both were able to take advantage of stupendous amounts of practice time to become very, very good at what they did. In each case, Gladwell estimated that it took 10,000 hours of practice for those individuals to hone their natural raw talents and become world class – roughly ten years of multiple hours of practice (3 or so on average) every single day. Gladwell offers many other examples of how this practice pays off, but that magic number of 10,000 hours pops up again and again.

Three: The Trouble with Geniuses, Part I
Shouldn’t IQ be a strong indicator of success in life? It turns out that IQ is only a minor indicator of success – people who are successful often have a higher-than-average IQ, but IQ alone is not a predictor of success. Gladwell demonstrates this using several different angles, but perhaps the most stark was his example of a creative test given to two children. It turned out that the one who had scored higher on an IQ test was actually significantly less creative than the other child – the high-IQ child gave functionally correct answers, but they didn’t possess that spark of creativity that the answers from the other child provided. In other words, IQ is just one small piece of the puzzle for success – a high IQ is not necessary to succeed, though there may be a minimum IQ threshold for success.

Four: The Trouble with Geniuses, Part II
In fact, there are two factors that seem to be as big (or bigger) than IQ in determining whether someone will be successful or not. The first is parenting – what kind of culture is the child raised in? A home where a child is encouraged to learn for themselves, develop an independent and questioning and creative nature, and receive support in this growth is far more likely to see adult success than a child without this. A second major factor discussed here is social skills: does a person interact well with others? Are they able to convince others to see things their way? Gladwell seems to make the case that these factors in conjunction with creativity and at least an average IQ (though having an above-average one helps) are big keys to success.

Five: The Three Lessons of Joe Flom
Gladwell applies some of the lessons of the first four chapters here in a review of the life of Joe Flom, who built the law firm of Skaaden, Arps into one of the largest in the world. Gladwell ignored intelligence and personality and focused instead on other aspects of Flom’s growth: the Jewish culture he grew up in, pure demographic luck (meaning he was born at the right time in the right social situation), and the work ethic instilled by having entrepreneurial parents who worked hard and used their minds to succeed. In other words, Flom had a culture, an opportunity, and an example of success in his life.

Six: Harlan, Kentucky
Harlan, Kentucky has an extensive (and rather violent) history that revolves deeply around individual and familial pride. Gladwell brings it up here because one can actually see the cultural heritage of Harlan (and many other nearby towns) in the residents that live there today. In other words, the culture of Harlan that has persisted since the 1800s is still apparent in the area today and still affects the personality growth and demeanor of people who grow up in that culture. From this, Gladwell concludes that many people are, in ways both mundane and surprising, products of the environment and culture they grew up in.

Seven: The Ethnic Theory of Plane Crashes
Gladwell offers up an intertwined set of stories about plane crashes and how crews handle them to illustrate how cultural norms can change how exactly people handle stressful or challenging situations. In the primary example, Gladwell looks at submissiveness in Korean culture and how it created a dangerous series of situations on Korean Air flights, mostly because Korean Air adopted the norms of Korean culture. This resulted in individuals on the flight crew being more submissive than they should be, and this submissiveness resulted in a poor safety record for Korean Air. It took cultural reforms within the business to change this, resulting in Korean Air becoming one of the safest airlines.

Eight: Rice Paddies and Math Tests
What about the cultural idea that people from Asian cultures are better at math? There are actually several cultural reasons for this, which Gladwell discusses at length. The most memorable for me was that Chinese uses very short syllables for numbers, enabling students to save more numbers in their short term memory than students from other languages and cultures. Not only does this make some basic mathematics easier for Chinese students, it also means that their mathematical education can move faster, resulting in more and stronger coverage of basic mathematical concepts.

Nine: Marita’s Bargain
Here, one observation stood out above all the rest, and it really tells the entire story of this chapter. Over summer vacation, students from poor or middle-income backgrounds tend to stay the same or actually slightly regress in terms of their reading skills. Students from upper-income backgrounds, however, continue to grow in their skills at a rate roughly equal to continued schooling during vacation. The result? After several years, there’s a genuine achievement gap between low income children and high income children. The difference? During the summer, the high-income children are pushed to read, learn, and grow. Their culture at home is about learning, and because it’s a cultural norm, it’s a part of their everyday life.

Some Thoughts on Outliers
Here are three things I think I think about Outliers.

Focus is the key. The big lesson I took from Outliers was that consistent practice over a long period pays off. It takes a lot of practice to become great at something – but if you want to leave your mark and truly become an outlier, you need to start cracking. Three hours a day for ten years should do the trick.

Culture makes the focus easier. If you’re raised in a culture that rewards focus on a particular area, whether it’s just the culture in your home or it’s the larger culture of your community, you’re more likely to actually become great at something. Surround yourself with individuals and situations that encourage you to constantly strive to improve yourself.

Sometimes, it’s simply luck. You might have every tool you need for success, but that doesn’t guarantee success. Sometimes the greater culture simply opens the window – or it closes it. The best thing you can do is simply collect the tools – surround yourself with good people, practice your skills faithfully, and seek out opportunities.

Is Outliers Worth Reading?
Gladwell is an excellent writer, no doubt. I thoroughly enjoyed this book from beginning to end and would unquestionably recommend it to virtually anyone who has an interest in the basic topic of success.

While there were not many “take away” lessons from the book, it did inform me in three ways as to how I could make changes in my own life: raise my children in an environment that encourages learning and creativity, figure out what I’m passionate about and practice it intensely, and continually surround myself with supportive people.

Outliers is well worth reading as a starting point on success – it’s easy to pick up and enjoyable. I look forward to following up with some books from the extensive reading list provided at the back of the book. Add this one to your Christmas list or request it at your local library.