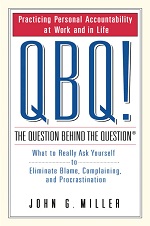 Guess what? Casting blame on others doesn’t solve any problems. It’s simply the path of least resistance – when there’s a complex problem, it’s easier to sit back and blame others than to do the hard work of trying to actually solve the problem or, even more painful, look at ourselves as the source of the problem.

That’s pretty much the idea behind QBQ by John Miller. QBQ is short for the Question Behind the Question. The book’s subtitle spells things out: Practicing Personal Accountability at Work and in Life.

The idea behind the book is that if you take every negative aspect of your life and reformulate it into a question or statement with you as the subject that describes what you did or didn’t do to lead to that negative situation, then you’re taking a big first step towards identifying what you can actually do to make the situation better. It puts the action imperative on you, which is good because, in the end, you’re the only person who can control what you do.

This book is divided into a lot of small chapters, so rather than reviewing each one, I’m just going to pull out some of the big, useful principles from this book.

Modeling is the most powerful of all teachers. Finding a mentor and modeling yourself after that mentor is simply the best way to improve yourself in your preferred field. Look for the person that is both liked and respected by everyone around him or her while also producing amazing work and then make an effort to emulate what they do. Don’t be afraid to ask them for ideas or suggestions or how exactly their workflow goes.

Stop trying to change others – change yourself, instead. It is extremely ineffective to make your peers change. If you want change to happen in the workplace or in your personal life, you have to take those steps yourself. End some relationships. Take the initiative. Start some new relationships. You have to make the change.

Accountable, successful people blame no one – not even themselves. When something goes wrong, it’s easy to start tossing out blame. Someone else messed up, right, so let’s blame them! In truth, placing blame is usually a waste of time. Instead, you’re much more likely to get the resolution you want by contributing to the solution to the problem.

Whenever you’re faced with a situation, question it by asking “what” or “how,” not “why,” “when,” or “who.” Saying “why,” “when,” and “who” simply lead to placing blame, not to solving the problem. Instead, when you’re faced with a challenging situation, ask questions that start with “what” or “how.” The answers to these questions actually provide useful information that lead to the resolution of the problem.

Contain an “I” in that question (not “they,” “them,” “we,” or “you”). “What can I do to help?” is almost always a great question to ask when you run into a problem. It leads directly to solving that problem without casting blame on the people around you.

Focus on action above all else. Passing along blame is passive – it doesn’t lead to any sort of resolution to the problem at hand. Instead, focus on action – what is it that you can actually do to solve this problem? The more directly you come to anwering that question, the better off you’ll be.

Communicate better – if you don’t understand them, it’s likely they don’t understand you. If a message is not being made clear, you may need to look at yourself instead of at the people around you. You can always improve your own communication by working to make your message more clear and making sure that you understand the messages you’re receiving.

The referee doesn’t win or lose the game. Blaming the rules of the situation isn’t a good choice, either. Your reaction shouldn’t be to blame the rules and then withdraw. You should instead try to figure out the best strategy to success within the rules then take action to make sure you follow through on that strategy.

Is QBQ! Worth Reading?
This is an excellent book for someone who is “in transition” to read. I think that if you’re a person who naturally blames others for all of their problems, this book won’t be of much help to you. Similarly, if you’re a person who naturally looks for ways to personally solve problems that occur and better yourself through those solutions, this book won’t teach you anything new.

It’s those people in the middle that really should read this one, people who have begun a journey of introspection and personal growth after realizing that the world is not out to get them and that they have the ability to create their own destiny instead of just blaming others and waiting for their ship to come in.

If you’re in that middle group, this is a fantastic read. It does a great job of discussing specific ways of interpreting situations around you and determining what you can do to make them better. Such processes benefit your professional, financial, and personal lives in countless ways every day.