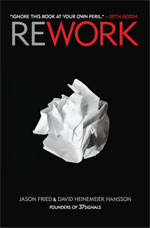 Sometimes, though, I’ll read a business book that transcends being a business book and spills over into great thought-provoking advice in other areas: careers, time management, money management, and so on. I’m often really inspired by such books and want to share them. This is one of those times.

Rework by Jason Fried and David Hansson (founders of the software development firm 37 Signals) has a very simple premise about success in business (as well as most other areas of life): simply do something. Stop worrying so much about the perfect plan and just go do something. Achieving something, even if it’s a failure, pushes you much further in the direction of success than planning and re-planning for something.

The book is made up of a large collection of short essays that focus explicitly on that point. I pulled out a few of them that I found particularly worth mentioning.

Learning from mistakes is overrated
Many people laud failure as a setup for eventual success because you learn from your mistakes. Instead, a much better path to success is to look for the areas where you succeeded and just repeat those. Pull forward your successes and leave your mistakes behind. If you’re trying to reboot your spending, keep doing the things that were already frugal, for example, and just replace your other behaviors.

Workaholism
When you work too much, you can easily destroy your ability to judge what’s important and what isn’t. Judgment calls like that require time away from work, where you interact with the world (which is what your product interacts with). Time away from work brings the clarity needed to distinguish between the worthwhile things at work and the trivial things. When you know how to discard the trivial, you don’t need to be a workaholic.

Meetings are toxic
Most meetings do not involve most of the people in the room. They’re essentially interactions between a small handful of people, while everyone else just wonders why they’re there and completely loses their flow on whatever projects you’re working on. Do meetings electronically or only meet with people when you’re sure everyone in the room actually needs to be there. Don’t waste the time of anyone else.

Long lists don’t get done
A long checklist of items feels overwhelming and leaves you with a sense that you can’t possibly get all of this finished. It forces you to choose from a lot of items and adds to your decision making time. Instead, make short lists of only three or so items and don’t go back to the well for more until those items are done. This reduces your decision time significantly and lets you focus on the real work.

Underdo your competition
Most people feel like they need to be the jack of all trades in order to succeed. They need to be everything to everybody, even though they’re never actually good at everything. A much better approach is to simply know what specific things you’re good at, do them as well as you possibly can, and delegate the other tasks. If you do this, you become a central part of the team; otherwise, you’re just another replaceable spinning cog.

Don’t be a hero
A hero is a person that usually overlooked the value of the people around him. In that process of overlooking, the hero had a great chance of utterly failing and letting everyone down. If you’re facing a challenge, look for what assets people around you have that can help meet that challenge, and don’t be afraid to share in the success of solving the challenge. When someone helps you, give them credit, and they’re likely to give you credit when you help them.

Is Rework Worth Reading?
Rework gets my thumbs up simply because it is such a good read, regardless of whether it’s really applicable to personal finance directly or not. It’s well-written, incredibly easy to pick up, and chock full of good ideas.

As always with books like this, if you approach it with some flexibility, you’ll almost always find multiple ideas that really click with your personal and professional situation, putting it in a new context. That’s the sign of a winning book in any genre.

Check out additional reviews and notes of Rework on Amazon.com.