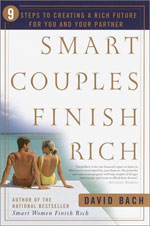 The premise of David Bach’s Smart Couples Finish Rich is the idea (I’m uncertain enough to avoid calling it fact, though David Bach does) that the primary source of disagreement between a couple is finances. Why does money always worm its way into the core of a relationship and begin to fester there? There are a lot of reasons, and this book strives to break them down and enable a couple to address them in nine simple steps.

David’s writing style is smooth and conversational, and the book provides a lot of material for couples to sit down and talk about, even if it doesn’t offer a great deal of concrete financial advice. This book has a lot in common with books such as Your Money or Your Life or, even more so, Dave Ramsey’s Total Money Makeover in that it focuses more on getting the mindset right than offering a great deal of specific mechanical personal finance advice.

Each of the nine steps discusses in detail some aspect of the financial relationship between partners and culminates in some sort of activity (or series of activities) for a couple to work on together in order to increase their financial (and sometimes spiritual) understanding of each other.

As for me, this was the first personal finance book I’ve read since starting this series that my wife has showed any interest in at all. She picked it up a few times, glanced through it, and even started a few discussions based on it, which is more than I can say for any of the other personal finance books I’ve ever read.

Another quirk: lots of personal finance books seem to like the “nine step plan.” In just the last two months, I’ve reviewed The 9 Steps to Financial Freedom and Your Money or Your Life and both utilize a nine step system, just like this book. Is there some psychological significance to nine steps that I’m not aware of?

Step One: Learn the Facts and Myths About Couples and Money
This chapter mostly focuses on debunking some pretty basic myths about money, such as the idea that love conquers money (money has nothing to do with love) and that it takes money to make money (compound interest can make big money for you). Mostly, it sets a psychological foundation for communicating about money within a relationship, enabling you to be able to talk about later topics while being on roughly the same page.

The exercise for this chapter is a basic financial knowledge quiz that both members of a relationship can take and talk over. The questions mostly relate to personal financial numbers, such as a couple’s current net worth and where the assets are. It gives a good indication of who possesses the financial knowledge in a relationship and what areas each person may be weak or strong in – and thus the two members can talk about these things and make sure that they’re both in the know, or have the opportunity to be.

Step Two: Determine the True Purpose of Money in Your Life
The focus of this chapter is squarely on figuring out your basic values. The chapter is dominated by an example of a couple digging through their personal belief structures to isolate what their core values are, a process that works wonderfully if you learn by example. An important distinction is made between goals and values here; goals are merely the expression of values, and as values are interconnected, so should goals be.

The exercise for this chapter revolves around listing the five central values in your life. The author encourages a relaxing situation before beginning to piece together your central values, and he also provides a lot of help in the process. Why would you want to do this? Once you’ve figured out your true values, you can use them as the basis for the rest of your life.

Step Three: Plan Together … Win Together
This step revolves around the development of a planning system that couples can share in, from a carefully designed record-keeping system to an assessment of long term goals. I felt that the suggestions in this chapter were pretty specific given how they’re supposed to be based on individual values (which can vary a lot), but they definitely do focus on the relationship between the two people and their relationships to money.

Key activities in this chapter include the development and implementation of a system to keep and maintain financial records and, from these records, the development of a plan that reflects the values you teased out in the second step. Bach provides a very steady hand in guiding these activities, which is reassuring for some but was a little too much for me.

Step Four: The Couples’ Latte Factor
This chapter focuses on something that is a theme here at The Simple Dollar: everyday small purchases are what is keeping us from being rich. Bach uses another case study here to demonstrate the frivolous (but also somehow completely socially acceptable) daily spending of a family: lattes and bagels in the morning, takeout for lunch and dinner, video rentals and late fees, and so on. It really added up, and Bach argued that if one could just strip $10 a day out of this, one could really prepare for retirement (I discussed how much $10 a day can make for you before…).

The exercise for this chapter is to use a notebook and for a single week record everything that you spend. At the end of the week, sit down with your spouse and review the notebook. It’s often shocking how much fat one can trim if you’ve never done this before (and sometimes even if you think you’re doing really well at it). The simple fact is that all of us can start saving money; if you buy frivolous things, just cut some of them out and suddenly you have money to start saving.

Step Five: Build Your Retirement Basket
Now that you’ve realized that you can save money, Bach introduces the idea of three “baskets” that you should put your money in. The first of these is the retirement basket. Bach argues vehemently that we should be putting (at a minimum) 10% of our gross salary into a tax-deferred retirement account. He discusses various mechanisms for doing this, including the usual 401(k), 403(b), and Roth IRA options, but mostly the focus is on the fact that you should be saving a healthy amount for retirement in some fashion. Even if the investment options are relatively poor, they’re still the best deal around because they’re tax deferred (meaning you can put money in without paying income tax, which effectively means you’re beating any money you might invest post-tax by about 30%) and many employees offer a match (meaning for every dollar you put in, your employer may contribute some, too).

The action plan here is obvious: see what retirement accounts are available to you and make sure that you’re seeing at least a 10% contribution into the account. I agree wholeheartedly with this idea; putting 10% of my income away for retirement, even during my most foolish days, is something I’m amazed to look at now: I have almost $40K in various retirement plans and I have more than thirty years until retirement.

Step Six: Build Your Security Basket
The second investment “basket” is the security basket, which is basically a safety net against the unforeseen. Bach recommends a healthy emergency fund for starters, in an account that earns at least a 4% APY, and following that up with a will/living trust, good health insurance, a life insurance policy, disability insurance, and eventually a long-term care policy. The action plans here are obvious: get started with the emergency fund (if you can spare a latte a day and two take-out meals a week, I can get you an emergency fund with almost $4,000 in it by the end of the year), then investigate other insurances and make sure you’re well covered so that if an emergency strikes, your family has no worries.

Step Seven: Build Your Dream Basket
The “dream basket” is the third place you should put your money, after the retirement basket and the security basket. Bach recommends that you put at least 3% of your annual income towards your dreams, simply so you can see that bright horizon in the future and know you’re actually moving towards it.

Bach and I agree on one thing: it’s a lot easier to live within your means if you see that you are working towards your dreams instead of working for your immediate wants and desires.

Step Eight: Learn to Avoid the Ten Biggest Financial Mistakes Couples Make
Most of these big mistakes are pretty well known (having credit card debt, not having a prenup, and so forth) and relatively unsurprising, though it is a good idea for a couple to review them together just to make sure that they’re both on the same page.

However, I found the first “mistake” to be quite interesting: getting a 30 year mortgage is a big mistake. Here’s why: the higher interest rate and longer term of the loan eat so much of your money that it’s not worth getting a slightly lower payment each month. This is an interesting issue, one that I’m going to look at very carefully in the near future.

Step Nine: Increase Your Income By 10 Percent in Nine Weeks
The final step is the one with the alluring title; who wouldn’t want a 10% increase in their salary in nine weeks? The catch (and there’s always a catch with concepts like this) is that the 10% increase comes from requesting a raise from your boss. This section merely provides a week-by-week guide building up to the actual raise request, including such items as looking at what others in your field are getting paid and so on. I was actually expecting some investment advice here; this is just not the type of “investment” I was expecting.

I picked up this book mostly because I was looking for ways to involve my wife in discussions of our financial future – and it worked. I moved gradually through the nine steps of the program and subtly coaxed my wife into some frank talks on those topics, even going so far as to make up a few lists together based on the presented exercises. I think we’ve reached a new level of openness on financial issues.

Thus, I believe you should buy this book if you are in a long-term committed relationship and don’t have open, frank discussions with your significant other about money. The entire book focuses on ways to open up this discussion and make it go easier, particularly in the early steps of the plan. The raw financial advice is pretty basic; the power of this book is found in the strengthened relationship that it can facilitate.

On the other hand, if you’re not in a committed relationship, don’t buy this book. There are many better personal finance books that focus on the individual, both from a psychological and a mechanical perspective. This book really shines when it focuses on the interpersonal dynamics of a committed relationship, but doesn’t really comment much on an individual’s finances.

Reading this in a bubble might have convinced me that it wasn’t all that good of a book, but it did open the door to some discussions with my wife that we’ve never had before, so I must conclude that the advice in the book works.

I originally reviewed Smart Couples Finish Rich in five parts, which you can find

Smart Couples Finish Rich is the ninth of fifty-two books in The Simple Dollar’s series 52 Personal Finance Books in 52 Weeks.