Review: Smart Is the New Rich 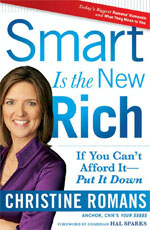 I’ll admit it – I’ve only seen the show Your $$$$$ on CNN once. I don’t watch much cable news – or broadcast television at all – so I don’t have much opportunity to follow programs like that one.

It’s a fine line that I try constantly to achieve, and I enjoy it when I find a book that manages to do it. Smart Is the New Rich seems to do that quite well.

1 | Reset, Repair, Recover
Money can’t buy you happiness, but like it or not, it is the engine upon which most material transactions occur. The smarter you get about these transactions, the more likely it is that you’ll be able to have the resources for the things you want in life. The best way to get started is to have a heart-to-heart with your spouse and with yourself. Ask yourself if your money is actually lasting through the month and whether your account balances are actually improving each month (on average). Are you living in housing that’s too expensive (more than a third of your income)? Romans offers up a bevy of such questions.

2 | Spending Your $$$$$
The real lesson of this chapter, I think, is that honesty with one’s self is vital. If you can’t honestly answer the question of whether or not you can actually afford to buy a particular item, it’s going to be very difficult for you to spend less money. Simply put, if you don’t need it, don’t buy it, and if you can’t afford it, put it down. Another key point is the value of saving first rather than last – the first thing you should do with your paycheck is to put some of it in a savings account that you can’t easily touch. I prefer using a completely separate bank for it.

3 | Your Job
I have one minor problem with this book and it begins to crop up here: politics. Romans often tries to slip in political perspectives throughout the book, never really offering enough to give a coherent political perspective, but just enough to taint the waters. Here, the book discusses the job market, pointing out the key fact that if you’re out of work, you need to work hard on retaining your skills and connections. On the flip side, if you’re still employed, future success hinges greatly on results.

4 | Debt
Here, Romans introduces the usual “good debt versus bad debt” dichotomy in which some debt is identified as being “good” (mortgages, student loans) and others are “bad” (particularly credit card debt). I tend to think that even “good” debt isn’t all that good and one of my current financial goals is to move as close to debt freedom as possible, simply because of the oppressive nature of debt paymetns constantly draining away your income.

5 | Credit Cards
Clearly, credit cards fall into the “bad” part of that “good versus bad” dichotomy. It’s key to remember that most Americans pay their credit card bills on time, but some people are unable to cope. Those who cannot need to take radical action to move into a situation where the credit card debts are under control. Another key factor related to credit cards is to make sure that your personal credit is under control – Romans points readers to the the FTC site for getting your credit report from the federal government.

6 | Home Sweet Home
The key thing to remember is that you begin to make money the day you buy your home. You’re now able to have a better commute. You’re more able to cook meals at home and to entertain at home. Don’t focus on “turning” a big profit on your home because, frankly, it’s not realistic. The idea that you can turn a huge profit on your home comes from the housing bubble, which was a period of unreality that we’re still reeling from.

7 | Save, Invest, Retire
Romans identifies three steps to a prosperous future: budgeting, saving, and investing. As you become more prosperous, your focus moves from the first to the second, then from the second to the third (I think we’re undergoing that second transition right now). Romans argues that no matter wherever you are along that spectrum, you should strive to spend only 70% of your income, striving to save or invest 20% of your income and then giving the remainder to charity.

8 | Family Money
Honesty, honesty, honesty. That underlines this entire chapter. If you’re deceptive about your money with yourself, you’re going to wind up in financial trouble. If you’re deceptive with your spouse, you’re endangering that person’s financial future and doing what you can to make sure they don’t trust you when this duplicity is discovered. Honesty makes it all better – if you make a spending mistake, admit it.

9 | Health Care
Here, the politics come out a bit again with some discussion of the upcoming health care changes in the United States – something I’ve been hesitant to talk about because I’m pretty confident that what we actually have in 2016 or so won’t look like what we think it’ll look like right now, so why speculate? Still, I do agree with Romans that changes in some regard are coming, and I also agree with her that health care expenses are a huge problem. The best thing you can do is stay active and focused on your own health – eat well, get exercise, and do what you can to stay healthy.

10 | Small Business
A good small business rests on a good business plan, good relationships with the community, and startup funds that aren’t personally strangling you or strangling the business. If you have those elements in place, you’re much more likely to succeed than if those elements do not exist.

11 | Government
Quite frankly, I didn’t like this final chapter. It provided a healthy dollop of politics in a book that didn’t really need them, and that’s my biggest criticism of the book. Although I enjoyed pieces that showed how government and personal finance are connected, I didn’t like when the book kept going and moved into the stuff of political debates, which are endless and divisive. You’re not going to convince a conservative to be a liberal and you’re not going to convince a liberal to be a conservative. Rather than demonizing each other, let’s seek out some common ground and focus on making that common ground an absolute home run instead of arguing about minor social issues while trillions of taxpayer dollars vanish down a rathole.

I just wish the author had chosen to keep the more politically-edged elements out of the book. While some will enjoy them, I just felt that it was out of place and is likely to distract some from the good personal finance message in the book.