Every other Sunday, The Simple Dollar reviews a book of interest. 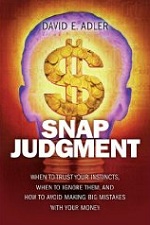 Over the last few years, I’ve come to believe that the biggest key to personal finance success is controlling your own psychology and impulses.

Our entire lives are filled with quick decisions we must constantly make – and, for the most part, we’re good at it. We commute to work without getting in an accident. We make constant little decisions at work – and at home, too. We’re able to effectively take several pieces of information, combine them together, and make a pretty good choice based on the result – and we do it over and over again.

Unfortunately, that same ability often doesn’t serve us well at all when it comes to personal finance. The ultra-quick decision making process that leads us to making great little choices in everyday life often leads us to making disastrous financial decisions. Very rarely do snap decisions work out well in the financial world.

This concept is the central focus of Snap Judgment by David Adler. He makes a two-fold argument. First, such snap decisions fail us financially and, if we’re able to get control over them, we’re much more likely to find financial success. Second, understanding how people make such snap decisions can help us to predict and prepare for the choices that other people will make, pushing us to further success.

I: The Psychology of Financial Decisions
The basic rule of thumb for success in any financial arena is “buy low and sell high.” It rings true in everything from stock investing to grocery shopping. The problem is that most of our normal financial cues tell us to do virtually anything but that. For example, we often believe there must be value to be found if everyone else is buying something, but quite often that means that it’s the opposite of a bargain – the price is overinflated.

Similarly, we are often wired to overlook what we view to be small amounts of risk – if we didn’t, we’d never leave our house in the morning. However, when we apply the same philosophy to investing, we overlook those seemingly small risks and chase what looks like the biggest returns – and then we get bitten by those risks. That’s why so many people got caught losing big chunks of their retirement in 2008?

II: The Track, the Stock Market, and Other Types of Gambling
Our brains are wired to see patterns in our lives, from traffic to grocery shopping to financial markets. Most of the time, when we act based on how we think things will go based on those patterns, we guess right.

The problem is that the stock market and most forms of gambling present false patterns to us, ones that have nothing to do with what happens next. People stare at charts and sit at slot machines because our minds are convinced there’s a pattern in the chaos and that a big winner is about to emerge. Quite often, though, it’s not coming down the pipe.

III: Personal Decisions, Personal Safety, Personal Finance, and Health Choices
Another method in which people falsely assess risk is in our own health and mortality. Many, many people don’t have life insurance because they simply see the risk of their own death as being too minute to really concern themselves with, whether in a conscious or subconscious way. For the same reason, many people don’t bother with annual checkups at the doctor.

In each case, the concern isn’t the chance of the risk, but the severity of the event when risk comes to call. We assess the chances themselves quite well, but we’re poor at assessing the consequences of the bad event actually occuring and whether or not a small cost now is worth covering that big bill later on.

The latter three sections of the book are much shorter and focus on very narrow issues, mostly ones that have really popped up as a result of the 2008 financial crisis.

IV: CEO Behavior
CEOs rise to the top of the corporate ladder by taking risks and having those risks pay off. That’s how a future CEO stands out from the pack – they stick their neck out and succeed. When they get to the top, they often have huge confidence in their abilities, whether it’s warranted (Jack Welch) or not (Bob Nardelli). Often, one sign that a company is either going to succeed wildly or utterly fail is in the behavior of the CEO: are they full of their own hubris? Do they hold onto stock options too long? Good signs include a laserlike focus on their company. Bad signs include self-promotion, like writing books and going on book tours.

V: Psychology and the Credit Crisis
Investment bubbles happen for the reasons outlined above: people see others rushing in and making good money and decide to rush in themselves. Inevitably, though, any market eventually runs out of buyers, at which point the bubble pops and people lose big. The opposite is also true – think of someone shouting “fire” in a theater or a bank run. Quite often, that kind of trampling panic can cause far more damage than is warranted in the situation.

VI: Debiasing
How can you avoid all of this stuff? First of all, slow down. Very few financial decisions have to be made in a “snap” context. Second, communicate. Talk it over with others. Have a “money buddy” or even a group of people to talk decisions through with. Third, cover your risks. Don’t invest in stocks unless you can afford the losses and have insurance unless you’ll be fine without it.

Is Snap Judgment Worth Reading?
Snap Judgment is a thorough and interesting review of how psychology affects investment and financial choices. It’s written approachably and thoughtfully and does a good job of covering the 2008 crisis in the latter sections of the book.

The only real drawback with the book is that the topic area has been covered by a lot of other books, many of which are very, very similar.

If you’ve read a book on financial psychology, Snap Judgment probably isn’t a necessary read, but if you’ve never read one, you ought to, and Snap Judgment is a pretty fine place to start.