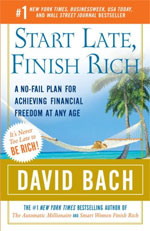 As I’ve written before about David Bach’s books, you really only need to read one of them. I’ve read and reviewed The Automatic Millionaire, Smart Women Finish Rich, and Smart Couples Finish Rich and I found that … well, for the most part, they were the same book.

Bach’s books focus on a handful of points (the “latte” factor, the power of automatic savings and investments, the idea that your relationships with people are key for money management) and applies them to different groups (women, couples, people with large money aspirations). Here, Bach’s focus is on middle-aged people – people who are seeing retirement age sneak up on them but haven’t really started saving for it.

So why review Start Late, Finish Rich? If it’s “another” David Bach book, why review it?

The biggest reason is that it has the potential to give some real insight into shorter-term goals. Most of the ideas presented in Bach’s other books assume that people are going to be investing for the long haul – thirty or forty years. This book tosses that assumption out the window – what about goals of ten or fifteen years? While I’m not looking at retirement in that time frame, I am looking at some other goals and I’m wondering if there’s useful advice in here for me.

More importantly, though, my father-in-law will be retiring in this time frame. I’ve talked to him a bit about financial questions and, if this book seems to make sense, I’ll be giving my copy to him and recommending that he read it.

Is it worthwile? Let’s dig in and find out.

First, it’s never too late to start saving. No matter how close you are to your goal, it’s never too late to start. I like to think of it this way. Imagine you’re going to buy a car in six months and don’t have a dime saved for it. You’re far, far better off saving $300 a month starting now and having a $1,850 (or so) down payment in six months than not saving a dime until then and getting a loan for the whole car. You reduce your debt by $1,850 and also reduce the amount of interest you’ll pay over the life of the loan. Start now, not later.

Second, the first (and biggest) step is recognizing that there’s a problem. The day you really realize you need to kick things into gear and start doing something – anything – about it is the most important day of all.

Part Two: Spend Less
In the second section, Bach offers some pretty straightforward advice on spending less and reducing debt. Unsurprisingly (for anyone who has read other Bach books), he leads off with the “latte factor” (calling it the “double latte factor”, but it’s the same idea). For those uninitiated, the “latte factor” refers to the idea that over the long haul, you can save a lot of money if you cut out very small routine expenses from your life – like a daily latte at Starbucks, for example. Using the repetitiveness of a $4 latte, if you were to buy one every weekday for a year, you would have spent $1,040 on lattes in a year. If you take that $1,040 and put it somewhere where it earns 7% a year (say, a retirement account), you’ll have just shy of $100,000 after thirty years. Obviously, not everyone overspends on lattes, but everyone does have something that they spend a little more than they should on routinely. I had a whole pile of “latte factors” before my financial meltdown… in fact, I’ll be talking about this later today.

Bach also addresses credit card debt – basically, that credit card debt will eat you alive, but it’s not because of the amount you owe. You’ll be eaten alive by the interest (and possible late fees). You do have some leverage, though – so many companies are in this business that they’re cutthroat with each other, thus it’s not too hard to talk a credit card company into reducing your interest rate to keep you as a customer.

Two other good suggestions: don’t devote all of your resources to debt elimination if you’re this late in the game, and also don’t use credit counseling services for things that you can figure out yourself (and most consumer debt situations can be figured out on your own with some time and care).

First, make your investing and savings automatic. This is the big principle behind Bach’s book The Automatic Millionaire. Simply put, instruct your bank to directly sock some money away for you in an investment or savings account. That way, that money isn’t even there in your checking account to tempt you into spending it. I agree wholeheartedly with this idea – it’s a big part of how I manage my own money.

Second, buy a house. Even in today’s terrible housing market, this still makes a lot of sense over the long haul because you’ll wind up holding an asset rather than putting money in someone else’s pocket. My feeling is, though, that many people in Bach’s audience already do own their own home (or are close to it).

Part Four: Make More
Here, Bach argues that it’s going to be pretty tough to make up the difference if you don’t kick your income into high gear. That means either increasing your pay doing what you’re doing right now or starting a side business.

For increasing your pay, Bach basically says to take an honest evaluation of yourself as an employee and ask if you’re valuable to the organization. If you are, use the exact reasons why you’re valuable as leverage for higher pay. If you’re not, find ways to become more valuable at work – be self-motivated, waste less time, and so on.

Bach also encourages people to find a side business, and he offers up quite a few suggestions in detail. At least one of them is dated – I don’t know that too many people who are involved in real estate on the weekends that are doing really great at it right now – but many of them are solid ideas.

Part Five: Give More, Live More
Why do all of this – working harder and cutting back on the little perks of life? Bach addresses that here, and basically it’s a matter of not having to work until you drop dead. Your final years can be ones of peace both for yourself and for your children and grandchildren, instead of stressful.

This whole section reminded me of the grandmother of one of my college friends, who was still going strong at work when I was a college student. She kept working, she said, for the same reasons that she worked forty years earlier – she was working to make life better for her children. Back then, it was directly – she put a roof over their head and paid for them to go to school. Now she was working to make sure she didn’t become a burden on her children – and so that she could do some things that would make her grandchildren very happy (and thus, by extension, her children). Her reasoning was absolutely beautiful, and it almost brought tears to my eyes – I can’t even imagine how it would have felt if I were related to her.

Ask yourself why you want to finish rich, and use that for the motivation.

It’s another David Bach book, what can I say? They’re all solidly written, but they all cover much the same material with only a minor difference in perspective. Basically, I stick to my original belief that if you’ve read one David Bach book, you’ve covered most of the material in all of his books.

If you’re over the age of forty, this is probably the one Bach book to read. He cuts the timeframe down a bit from his other books, recognizing that you’re not going to be saving for forty years – more like twenty five or thirty. The writing also recognizes that you’re probably going to need to make a bit more serious lifestyle changes than in other books, as he delves more into increasing one’s earnings.

Of course, he does rely heavily on the old Bach chestnuts of the “latte factor” and the mantra of “make it automatic.” Those things are true in pretty much every book I’ve read by him. After so many readings, I realize that these are really his core principles and he feels a need to hammer them home in every book he writes.