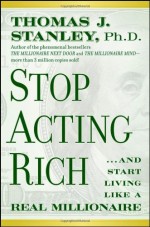 Over the years, I’ve professed a ton of admiration for Thomas Stanley and William Danko’s excellent personal finance book The Millionaire Next Door. It was the first book I reviewed on The Simple Dollar and it’s still one I turn to regularly for ideas and inspiration.

Thomas Stanley expands upon that single idea here in Stop Acting Rich. The entire premise of the book is simple: lasting wealth and happiness is rarely found through buying expensive things. Throughout the book, Stanley relies on extensive research of people who have acquired financial security – much the same group as in The Millionaire Next Door – to illustrate and reinforce his points, painting a pretty convincing case of the actual buying habits one should adopt if one is seeking lasting personal wealth.

1 – The Difference Between Being Rich and Acting Rich
Stanley opens Stop Acting Rich by defining a group of people he calls “aspirationals” – people who choose to act like the super-rich, but don’t have the financial resources to truly back it up.

The “aspirationals” and the truly rich (people with truly exorbitant wealth) tend to spend a lot of money. Stanley reviews these spending habits in detail here – think yachts, country clubs, cases of vintage wines, private jets, BMWs and the like. To put it simply, “aspirationals” often have to sacrifice every dime they have to appear rich, leaving them incredibly vulnerable to losing everything.

What’s interesting is that this “aspirational” and “truly rich” phenomenon continues all the way down the money scale. In many neighborhood, there are “aspirationals” – people who are pushing themselves into financial ruin to keep up appearances – and people who can actually afford to live there.

The solution to financial success is pretty simple – stop being an “aspirational.”

2 – Everything You Think about Rich Is Wrong
When you step back and look at “aspirationals” from an outsider’s perspective, an interesting phenomenon occurs. Aspirationals are more common than the truly rich by far, so our “pop” idea of what it means to be rich actually comes from people who are financially poor and are making reckless decisions for their future.

“But what about dressing for success and the like?” The only people who you should focus on impressing and winning the support of is your professional peer group and community. Their respect is what will actually impact your life. In many – if not most – professional communities, the watch you wear or the car you drive doesn’t matter one little iota.

Yet, while that person is focusing their energies and resources on appearing rich, others are focusing their energy on building the skills that will pay the bills. While one person is buying expensive shoes and keeping up appearances at the country club, the other person is practicing their speeches and coming up with a better business plan.

In the end, one of these two people will find lasting wealth. Will it be the glossy suit with nothing underneath, or the person who put in the time to prepare?

Don’t put the appearance of success before success, or else someone who is actually putting in the footwork will grab that brass ring away from you, leaving you with nothing but a mountain of debt. Focus on the skills that pay the bills, not on the bills that bring more bills.

4 – Brother, Do You Have the Time?
Want to know why you’ll often read articles or hear about people who wear expensive things getting extra attention? It’s because having high-end items makes you a target for people who want to drain even more of your money.

Think about it. If two people walk into a jewelry store, with one person dressed in normal clothes and another person dressed to the nines and wearing a $10,000 watch, which one do you think will get more attention from the salespeople – and thus more encouragement to buy a more expensive item than he or she intended to buy? Such “attention” is the type of attention that causes you to walk out of a store with an overpriced item.

If you value your money, you’re better off not appearing affluent in public.

5 – Keeping Up with Your Spirits
Here, Stanley focuses in specifically on one type of product – sspirits – to make a greater point about purchasing habits. People who buy high-end wines and spirits do so because they believe that having a particular brand – a brand that’s been built up with a lot of careful marketing – of liquor will somehow enhance their satisfaction with their lives.

In truth, an expensive brand is often of debatable quality as compared to the “bang for the buck” choice. The premium paid for a luxury brand may offer a bit more quality, but the minute increase in quality is rarely worth the extra price. What people pay for is the “cachet” – the idea that this particular brand will contribute more to the quality of their life than the other brand.

And that’s called marketing, my friends. Nothing more, nothing less.

6 – The Grapes of Wrath
Stanley discovered an interesting correlation between the net worth and the amount people spent on wines. Ignoring the outliers, the more a person spent on a bottle of wine, the lower their net worth was.

Why the focus on wine? More than almost anything else, wine is a prestige-oriented product. There are many, many wines with strong tasting scores well under the $10 threshold, yet many people who are “aspirationals” tend to seek out the prestige wines – vintages with exorbitant costs that are only marginally better than the $10 versions and, even worse, actively turn their noses up at the lower cost vintages.

Such snobbery has a dual effect. Not only does it sap you of your financial strength, it also can cause unwanted negative consequences. Stanley relates a tale in which a person thought they were showing off high class and sophistication by turning up their nose at the $12 wine offered to them and brandishing their own expensive vintage, but in the eyes of the wine offerer, the person was being downright rude and his actions cut off a potentially useful relationship. To put it simply, trying too hard to appear affluent can cut off relationships.

7 – The Road to Happiness
Among millionaires, what automobile manufacturer has the highest loyalty rate? The highest percentage of ownership? The most recent buys?

One might expect to hear names like Mercedes-Benz and BMW here, but in truth, the answers are Chevrolet, Ford, and Toyota, respectively. In other words, millionaires aren’t the ones buying the expensive cars. Who is? The “aspirationals” – the broke people pretending to be their idea of what a millionaire is.

You can actually judge people by their cars. If you see a shiny new Mercedes rolling your way, it’s likely that the person inside isn’t rich, they’re just pretending to be rich.

Stanley actually draws this correlation statistically in this chapter, as well as relating that ratio of financial assets to home value to one’s state of happiness. Guess what? The lower that ratio is – meaning that you’ve got a mortgage so large that your net worth is significantly lower than the value of your home – the less happy you are with your life.

Instead of buying what you think you need, focus on buying what you actually need. We did this very thing at our home, where our two children share a bedroom (and soon the three of them will). They don’t need a bedroom to play in – that’s what the family room is for. Why have that unnecessary extra space? Just so we can store more stuff we don’t need?

9 – All that Glitters Is Not the Millionaire’s Goal
Accumulating wealth is an unhealthy goal in life. A person is much better off with other goals in their life.

Is Stop Acting Rich Worth Reading?
Stop Acting Rich is basically just a somewhat more action-oriented but perhaps slightly less rigorous and thought-provoking book than The Millionaire Next Door. They’re very comparable, as they cover many of the same topics.

From my perspective, it felt like The Millionaire Next Door was broader in scope, while Stop Acting Rich focused in on more specific behavioral issues. For some, that may make Stop Acting Rich more worthwhile; for others, perhaps not.

For me, I didn’t feel like Stop Acting Rich surpassed the original at all. Perhaps it was because the first book introduced the ideas, but this often felt like a re-hash in places, albeit of some excellent ideas. If you’ve never read The Millionaire Next Door, Stop Acting Rich would be an excellent read – if you have, it’s probably redundant.

The Simple Dollar has reviewed hundreds of personal finance, personal growth, and career books. Please check out the full list of Simple Dollar book reviews, alphabetized for your convenience.