Review: Stop Getting Ripped Off 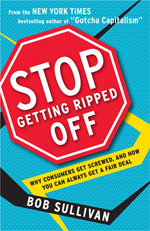 A long while back, I reviewed Bob Sullivan’s excellent book on consumer issues, Gotcha Capitalism. In that book, Bob focused mainly on how companies try to “sneak” surprise fees and costs into their products.

I took away a lot of good material from that book, but what I also took away is that Bob Sullivan is a really good writer about consumer issues. His MSNBC blog, The Red Tape Chronicles, is similarly well written. Thus, when I saw that he had written a follow-up book, again focused on consumer issues, I had to pick it up.

Stop Getting Ripped Off focuses on the same types of issues that Gotcha Capitalism did, but instead of focusing on the specific “rip-offs,” Sullivan instead looks at some of the reasons of why these ripoffs are even possible. Why are we even in a position to be taken advantage of to begin with?

Let’s dig in and see what he has to say.

money and basic math. To put it bluntly, Sullivan’s argument here (and I think he’s spot-on in some ways) is that companies get away with giving customers raw deals because they have a pretty good profile of many of the foibles and flaws of their customers.

For example, many customers are math-phobic and afraid to or don’t know how to figure out for themselves if it’s really a good deal or not. The companies also deeply understand behavioral economics and psychology and have a pretty good grip on how people react in certain situations – and try to create those situations to get a gut reaction that’s good for their business. Sullivan also looks at the “Stuart Smalley effect” – in other words, people just accept some degree of being ripped off because they don’t think it’s really that big of a deal. Another painful element is that quite often people are willing to believe in things that simply are too good to be true.

What causes companies to take advantage of such things? Greed. A lack of regulations or laws preventing it.

What can we do to fight back? Get good at basic math skills. Focus on the numbers above all else and don’t worry about the ads or the sales techniques. In other words, keep our eyes on the ball.

Part II | Stop Getting Ripped Off – One Deal at a Time
In this section, Bob covers a wide range of specific areas where the principles he talks about in the first section are at work: checking accounts, credit cards, car buying, home buying, cell phones, cable and satellite television, student loans, insurance, and even workplace compensation.

For each of those topics, he works through how companies use the tactics from Part I to give you a worse deal. For example, he talks about how no-fee checking accounts stick tons of potential fees on the account, then make it very easy for people to overdraft and make other such mistakes by giving them a debit card and not encouraging people to manage their own register. The bank makes their money back and more on the average customer who, because they’re not strong on math, overdrafts their account or bounces a check. The penalties are strong but not enormous, so many people just shrug it off due to the “Stuart Smalley effect” from the previous chapter.

Bob applies similar logic to each of the areas mentioned above and offers a few solutions for each. So, for example, he recommends not using your checking account for every purchase and instead focus on trying to use cash as much as possible. You should also try to pay all of your bills in one batch after payday so you clearly know what you have to spend on your bills and what you have left.

Part III | How to Pitfall-Proof Your Finanaces, Past, Present, and Future
This is the section of the book that I feel sets Stop Getting Ripped Off apart from Sullivan’s earlier book. Here, he sets the foundation for how to protect yourself from such things over the long term with a five step plan that takes a person from paycheck to paycheck to a secure financial future.

His first step is to build a small emergency fund and start a bit of retirement savings. In truth, he almost has a zero-th step – you’ve got to cut your spending, period. If you’re spending what you earn, you will never, ever get ahead and you will always be very prone to anything at all going wrong in your life. The first move to make when you do that is to just start socking away cash in a savings account so that when an emergency happens, you can deal with it. Any emergency fund is better than no emergency fund, but if you can start getting a month or two of living expenses built up, you’ll be much more secure.

His second step is to save for retirement and, with the remaining money, start paying down debt. He suggests just making sure you’re in your 401(k) (or equivalent) plan at work and that you’re getting whatever money your employer offers as a match – and if they don’t offer such a thing, opening your own Roth IRA (I have mine through Vanguard). He also strongly encourages coming up with a debt repayment plan.

His third step is to keep rolling on your plans: an emergency fund, retirement, and debt repayment. You should shoot to build an emergency fund that will sustain you for six months, with about six weeks of it in cash and the rest in a broad stock market index fund. He also recommends building your retirement savings with strongly conservative investments – don’t put it at risk with stuff like international stocks.

His fourth step is to start saving for major purchases, like cars and so on, once you’re debt free. You do not want to just continue a debt cycle, especially when you’ve eliminated all of that debt and have a huge monthly cash flow. This is also the perfect time to start investing for yourself with the aim of eventually living off the income from those investments.

His final step is to not escalate your lifestyle. When you get a raise, don’t start buying stuff – instead, channel that raise into your wealth building. Keep saving for your big purchases.

I’d say I’m basically in the fourth step. I’m saving for everything I buy in the future and I’m nearly debt-free (just my mortgage at this point).

Sullivan’s advice, though, seems to assume a fairly good income to begin with, so if you’re struggling to earn much more than minimum wage, this might not be the book for you.

The strength of this book is how Sullivan transitions escaping from the nickel-and-diming to a lifetime of financial security. It really is a journey, and Sullivan captures that very well in this book.