Every Sunday, The Simple Dollar reviews a personal finance or other book of interest. 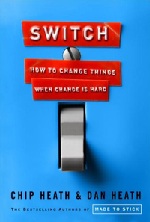 Routines are hard to break. Individual, specific routines might be easy, but they’re like a single thread in our lives, lives made up of a lot of routines. Those threads in our life, taken as a whole, are very difficult to break.

Switch, by Chip and Dan Heath, focuses on this very situation. The subtitle explains it very well: “How to Change Things When Change Is Hard.” The Heaths’ previous book was one of my favorite books I’ve ever read, so I was eager to see what they had written and see if some of their ideas overlapped what I had learned about changing many of my own spending habits.

1. Three Surprises About Change
The first surprise about change is that the problem usually isn’t people, it’s the situation. If you want change, you’ve got to change the situation a bit. The second surprise? The lack of initiative for change often isn’t laziness, it’s exhaustion from butting your head against the wall too many times. The final surprise is that resistance to change is often lack of clarity – we often don’t know specifically what we need to alter in our lives.

2. Find the Bright Spots
As a whole, society focuses on failure. Think about politics, for example – when was the last time you heard something positive about whoever’s been elected? We do this in our own lives, too – we focus on our failures and then believe that our failures define us. Instead, we should look at the bright spots and focus on the small successes. Instead of feeling like a loser because we spent more than we should have or ate more than we should have, we should instead look back in a positive way at the times where we succeeded in spending less or eating less.

3. Script the Critical Moves
Spend some time thinking about the moments where you have to make a critical choice. Think about them well in advance. Envision yourself making the “good” choice. Keep that in your mind and repeat that positive scenario over and over. What you’re effectively doing is training your mind to begin to see the “right” choice as the normal, natural choice, so that when the difficult choice comes around, it’s not really all that difficult of a choice.

4. Point to the Destination
I often talk about painting a picture of where you want to be in five years. That’s the idea here. Envision where you want to be at the end of the journey. Sketch it out in detail, particularly in the multitude of ways it will improve your life. Keep that vision of your future life front and center as you begin to make the hard choices you’ll have to make along the way.

5. Find the Feeling
Fill your life with as many positive emotional experiences as you can that revolve around whatever change you’re trying to elicit. If the change is making you sad, your approach isn’t working. The change should make you happy and lift you in a positive direction. Find the elements of your change that really make you feel good, then seek those out and keep those front and center. For me, the great feeling when improving my finances was looking at my account balances, so I unabashedly did that as often as possible. If you’re exercising, perhaps you feel best right at the end of an exercise session – so when you think about exercising, focus directly on that feeling.

6. Shrink the Change
If you can find instances of the type of change you’re looking for in the habits you already have, you’ll feel a lot better about yourself overall and about those activities that already exhibit that change. In fact, you’ll often be driven to engage in more of those activities. For example, when I realized how inexpensive of a hobby reading really is, particularly in the form of reading library books, I dove into the hobby, meaning that my time spent on leisure’s cost per hour went down drastically. I was very happy, proud of myself, and enjoyed the financial fruits of the change, too.

7. Grow Your People
If you want results, surround yourself with people who are actually getting the results you desire. If you want to lose weight, have a social circle filled with people who have either lost a lot of weight and kept it off or maintain a healthy weight to begin with. At the same time, focus on building a growth mindset, not only in yourself, but the people around you. Encourage any notion at all that you can change who you are, what your skills and talents are, and what your “destiny” in life is – because you certainly can.

9. Build Habits
If you’re attempting to build a new habit, one great way to do this is to set up an “action trigger.” Define when exactly you’re going to engage in this new habit. For example, I might say that I’m going to exercise right after I drop the kids off at daycare, and I focus on that action trigger several times over the weekend. Then, on Monday, when I drop the kids off at daycare, I’m very much compelled to exercise because I believe that’s what comes next in the routine. I’m essentially injecting something new into the mix.

10. Rally the Herd
Whenever you’re trying to change your ways, enlisting the help of those around you is always worthwhile. They can provide countless nudges in the right direction, from simply asking you about your goal to nearly dragging you out the door to take care of business. They can point out specifically when you’re about to make a mistake and celebrate with you when you achieve something big. The people around you are a powerful mold for your behavior.

Is Switch Worth Reading?
I certainly found Switch to be a thought-provoking read. It’s quick-paced, packed with a lot of good ideas, and is really accessible to everyone’s life, because virtually everyone would like to change something in their lives.

Over the next few months, I’m going to attempt to throw as many pieces of this book as I can at my exercise habits, which seem to constantly ebb and flow. I can envision a lot of ways to make this work and this book has given me a pile of ideas to try.

It’s a book that I’m going to keep around to read again, which is about the highest compliment I can give to a book.