Review: Take Back Your Time

Each Sunday, The Simple Dollar reviews a personal finance or personal development book. 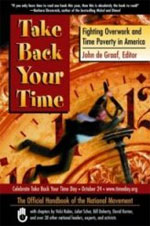 Over and over again, I’ve come to realize that most of the stress and money management problems that people have come down to one thing: a lack of time. It’s because of that realization that I’ve come to write somewhat regularly about time management and figuring out the cash value of your time.

Take Back Your Time is a collection of essays on the topic of battling overwork and time poverty in America. I picked it up mostly on the strength of some of the writers that have written things I’ve loved in the past: Vicki Robin contributes an essay (she co-wrote Your Money or Your Life, which I utterly loved) and Juliet Schor (who wrote two books I’ve loved and reviewed here on The Simple Dollar, Born to Buy and The Overspent American), and those two alone were enough to convince me to pick up the book and give it a read-through.

I’m glad I did. This was a really thought-provoking collection of writings on time poverty, from various angles on how strong of a force it is to ways to battle it in our own lives – and in society in general. Often, I’m annoyed by a collection of essays on the same topic when people just parrot the same material, but the writers here tackle the topic from enough different angles that the varying perspectives made it quite enjoyable. Let’s dig in and see what’s inside.

Browsing Through Take Back Your Time

Part One: Overwork in America
The book opens by making the case that overwork actually exists, starting off with a scathing fact-based piece from Juliet Schor, the author of The Overworked American. Statistically, it’s pretty obvious that on average, Americans work more today than they did thirty years ago, and it’s continually growing. The other essays in this section tackle specific aspects of this: Barbara Brandt argues that opportunities are reduced for the underemployed and unemployed and also examines the places where this time comes from (families and sleep); Joe Robinson looks at the lack of paid vacation time, especially compared to the rest of the world; and Lonnie Golden addresses forced overtime in its various forms, from requiring hourly workers to work extra hours or piling requirements on salaried workers and forcing them to expand their hours. The end conclusion? The workplace is eating up more and more of our time.

Part Two: Time is a Family Value
Time poverty affects children and pets, too. When parents and pet owners have more and more of their time drawn away to work, less and less time is spent at home caring for children and caring for pets – this time has to come from somewhere. Less time spent means a less healthy relationship with children and with pets. Even more, children themselves often feel the pinch of needing time management: overscheduled children, with school and a ton of after-school activities, often lack the time to explore new things for themselves, develop a sense of self, have relaxing free time, and simply be children. In a nutshell, time poverty is detrimental to children and pets as well as adults.

Part Three: The Cost to Civil Society
Civil society loses out as well. One of the things most of us cut out of our lives when we start to feel the pinch is volunteer work. If we’re working more hours and we still want to maintain some semblance of a normal life, it’s easy to toss out volunteering for charities. This trend has shown up in contributed volunteer hours to charity over the last few decades, which has gone down. Similarly, we don’t do as many civil things for others that we used to do, like helping out a neighbor in need. Even worse, our elevated stress levels have caused us to be less civil to others, evidenced through trends like road rage. Basically, time poverty has made us less civil to each other.

Part Four: Health Hazards
Time pressure also causes health concerns. We minimize or compress exercise, don’t eat well (fast food is quick, after all), don’t visit the doctor, and are often subjected to stress-related illnesses. The end result is that we wear down after living a time-compressed lifestyle, with negative personal health consequences.

Part Five: Environmental Consequences
There are also negative environmental consequences to time poverty. Quite often, it requires many of us to increase our environmental footprint. We buy more prepackaged items, increasing our waste output. We have to commute alone because of our intense hours, thus burning more fossil fuels. We speed, burning even more fossil fuels. Most of these actions add more stress to our lives, compounding the other problems discussed earlier. In the end, overwork damages the environment.

Part Seven: Taking Back Your Time
Here, the book turns direction and begins to look at solutions, starting with your individual life. Vicki Robin starts it off, reiterating the concept of calculating the value of your time and the fulfillment curve as expressed in Your Money or Your Life – basically, a five page nutshell of the whole book. What’s the first step you can begin to take, though? Cecile Andrews offers it – cancel something. Find something in your life and just cancel it. Free up some time to breathe.

Part Eight: Workplace Solutions
Obviously, the biggest place to find solutions is in the workplace, and this section offers a bunch of different perspectives on it. Individually, one can simply put aside material needs and begin to look for lower paying and less time-demanding jobs, or perhaps investigate the idea of a sabbatical. Alternately, one can work to begin to facilitate greater changes in the workplace by demonstrating that jobs with less time pressure get done better, with higher quality for the time invested – in many cases, this would actually be better for business than trying to squeeze more and more hours out of a person.

Part Nine: Rethinking Patterns of Culture
My favorite essay in the entire book came in this section, where Anna Lappe argues quite well that our changing relationship with food is directly connected to time poverty. The rise of fast food is the result of people needing more time – they can get edible foods prepared for them very quickly at a relatively cheap price, and that’s good enough. But what’s lost in the process is the nutritional diversity and spiritual effects of food – a truly great meal offers nutritional value and spiritual value that can’t be recaptured at Mickey D’s, and time pressure is the cause. The solution? Try taking the time to make a quality homemade meal – a message that hits home with me. Another interesting argument appears here, one that argues that “super sizing” is the real opponent – large houses, large televisions, and large meals are large wastes of money when they leave us without the time to enjoy them.

Part Ten: Changing Public Policies
The book ends with discussion on how to change public policies in relation to time poverty and what individuals can do. There are a lot of potential options, but most of them require broad awareness and support, something which doesn’t exist right now. Thus, the book proposes that we engage in a “Take Back Your Time” Day each October 24, where we spend the day making others aware of the problem in any way we can, just to increase awareness of the problem itself and the potential solutions.

I found Take Back Your Time, as a whole, to be very interesting. It offered a lot of food for thought, different perspectives, and some solutions. It occasionally veered into the area of “we need big societal changes to fix this,” which is a rather dangerous road to follow, but when it sticks to identifying the problems themselves and providing individual solutions to the problem, Take Back Your Time really shines.

This is a great book to share with others, but it’s not one that I plan on returning to as a reference source. That’s true with most books of essays – you read them once and, if the essays are good, you share it – otherwise, why bother?

Thus, if you are interested in the topics presented here and know of some people you’d like to share it with, buy this book and pass it around. Otherwise, I recommend checking it out from your local library, but either way, it’s well worth reading for almost anyone engaged in Western society, particularly in the United States.