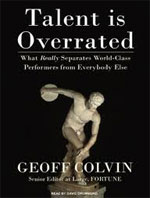 About a year ago, I reviewed the wonderful book Outliers by Malcolm Gladwell. That book discussed the nature of outliers – the exceptional people that dominate their fields, like The Beatles or Wayne Gretzky – and looked for things they have in common. One of the biggest conclusions from the book is that such outliers stand out because of obsessive amounts of practice. Gladwell estimated that practice time as being on the order of 10,000 hours.

Interested in this topic, I’ve slowly begun assembling a reading list of books that focus on the nature of talent. What makes people become very good at, say, the piano? Or academic research? Or anything else along those lines? The first book I came across in this search – one that I was referred to time and time again – is this one, Talent Is Overrated by Geoff Colvin, senior editor at large for Fortune magazine.

Colvin focuses in on a topic I’ve discussed on The Simple Dollar before:

The Mystery
All of us are at least aware of people that seem to have exceptional abilities in one area or another. Michael Jordan is one example. Bill Gates is another. What exactly gets them to that stage? Often, our initial guess is that they’re essentially born with it, that they have some sort of God-given ability that far exceeds our own. The truth is that it comes with a lot of practice. The reason these people who obsessively practice to the point of truly honing a talent become rich is because people will always pay for exceptional performance, now more than ever.

Talent Is Overrated
If you go back to the starting point, exceptional performers are often impossible to pick out of the group of beginners. Demetrius Walker was considered the greatest fifth grade basketball player in the world several years ago. Today, he’s a marginal Division I basketball player. Michael Jordan, on the other hand, was cut from his eighth grade basketball team. The best musician I’ve ever personally known sounded tone deaf for the first year she practiced with her instrument of choice. What separated these people wasn’t talent. It was practice.

How Smart Do You Have to Be?
High-performing businesspeople tend to have incredible memories and seemingly prodigous intellects. Were these natural talents? Usually, they’re not. For most of them, the key to reaching that level was a lot of hard work. They focused on training their memories to easily retain information and they mastered techniques for synthesizing the information they learned. These techniques, when practiced over and over again, amount to essentially the same type of deliberate practice that exceptional people execute in almost every other avenue of life.

A Better Idea
This chapter focuses on Jerry Rice, perhaps the greatest wide receiver ever to play in the NFL. That must have taken a lot of football playing to get that good, right? Wrong. One of the secrets to Rice’s success is that he played very little football. Almost none of the time he invested in preparing for games involved actually playing football. Instead, his prep work often focused on things that weren’t fun at all – exhausting and repetitive drills, particularly those that focused on his specific weaknesses, and a willingness to work on his own far beyond what others were willing to do.

What Deliberate Practice Is and Isn’t
Deliberate practice is designed specifically to improve performance. It can be repeated a lot. Feedback on results is continually available. It’s highly demanding mentally. It’s not fun. If this sounds painful, you’re right – it is. Remember, though, the people who do this are the people whose talent eventually stands out.

How Deliberate Practice Works
People who engage in deliberate practice eventually find themselves at a point where the specific mechanics of what they’re doing become completely second nature to them. Instead, they can focus much more of their mind on the bigger picture. For example, if someone is not very good at basketball, they may spend a lot of their time during a game thinking about their footwork and their grip on the ball when they possess it. People with exceptional deliberate practice no longer have to worry about this and can instead think about the bigger picture of the game – think of Magic Johnson or Larry Bird knowing perfectly where everyone is on the court, where the ball is about to go, and how to be in position to maximize that. This phenomenon exists in almost every field and it’s the result of deliberate practice.

Applying the Principles in Our Lives
Obviously, most of us can’t invest 10,000 hours to become the top person in our field. However, every little bit of deliberate practice helps in improving our skill set. You can use deliberate practice to improve the fundamentals of whatever it is you do at work, whether it’s memory improvement, typing speed improvement, analytical improvement, or anything else. For example, if you’re in a field that relies heavily on fact retention, time spent at home simply practicing your ability to recall facts after they’re told to you can have an enormous positive impact on your career.

Applying the Principles in Our Organizations
Many of the ideas presented here describe the work environment at companies like Netflix and Google, where much time and attention is given to the individual development and projects of employees. The more you cultivate individuals to excel at the things they do best, the greater your organization on the whole becomes.

Performing Great at Innovation
What about the great innovators? How do they maximize performance? For one, they recognize that innovation is rarely a “eureka!” moment. It’s almost always a slow evolution of ideas. Persistence at those ideas almost always pays off. In other words, they approach new ideas with what’s very akin to deliberate practice. They work slowly at the fundamentals of an idea, poring over what’s known, until new ideas begin to slowly emerge.

Great Performance in Youth and Age
Prodigies are often people who started deliberate practice at an earlier age than we expect it. Most people don’t start deliberate practice on their child at the age of two, but when parents do this, they often produce prodigies. On the flip side, people can often be late bloomers at many fields, simply through deliberate practice. One’s never too old to pick up a paintbrush, for example.

Where Does the Passion Come From?
It takes passion to put the time and effort into deliberate practice. Where does that passion come from? There’s no strict answer to this, but it often comes from surrounding yourself with people that encourage you to excel and discourage complacency.

Is Talent Is Overrated Worth Reading?
This book is simply loaded with thought-provoking insights on the nature of exceptional performance. Even if it’s not what you’re striving for in your own life, Talent Is Overrated can really sharpen your appreciation for what it takes for anyone to excel in a field.

For me, Talent Is Overrated was inspirational. It gave me many ideas about applying deliberate practice in my own life and inspired me to get to work. This one’s highly recommended, folks.

Check out additional reviews and notes of Talent Is Overrated on Amazon.com.