Review: The Adventures of Johnny Bunko

Every other Sunday, The Simple Dollar reviews a career, personal productivity, personal development, or entrepreneurship book of interest. 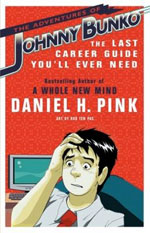 Without really paying attention, I picked up Daniel Pink’s book The Adventures of Johnny Bunko at the library. I just glanced at the cover, noting the subtitle (“The Last Career Guide You’ll Ever Need”) and that it was written by an author I like, and checked it out.

I got it home, opened it up, and found I was in for a surprise. The book is actually a manga – a short graphic novel drawn in the black-and-white Japanese style.

At first, I didn’t know what to think, but after reading it, I realize that this style was a brilliant choice. It takes the relatively mundane topic of careers and presents it in an entertaining and unusual fashion, one that’s particularly relevant to a younger audience (yes, I was a huge manga fan in my college days).

But is the advice worthwhile? Instead of destroying the rather fun plot of The Adventures of Johnny Bunko, I’m just going to delve a bit into the six big points the book presents for career management.

There Is No Plan
There’s a lot of talk out there about “career planning” – deciding in high school and college where you want to go with your life. In my opinion, most of that talk is bunk. By the time you get through your college career, the world will have changed. By the time you’re ten years into your professional career, the world will have drastically changed again.

You’re quite likely to find yourself, ten years from now, in a career path you couldn’t have possibly considered today. Five years ago, if you had told me I would be living as a personal finance writer, I would have laughed at you. But look what happened.

Don’t spend all your time planning out what you’ll be doing in your career in ten years. It’s hard to predict that. Instead, focus on the now and the skills and relationships you can build that will serve you no matter where your path leads you.

Everyone has a few natural talents and passions. The people that really succeed are the people that figure out those passions and talents and hone them while finding ways to minimize their weaknesses. This runs completely counter to the idea that if you have a glaring weakness, you need to work on it and improve it.

If you know you have a weakness, the best thing you can do is to find ways to have that weakness affect you as little as possible. Investing significant time in improving that weakness is a fool’s errand – it’s time that you’re not accentuating the positive.

It’s Not About You
The people who rise to the top are the people who offer value to others, not people who take the value of others and contribute nothing.

Look at the things you do through this lens. Is this activity leading to some sort of value for the organization or for others or for yourself without taking as much value away? If it’s not, you’re treading on dangerous ground.

Persistence Trumps Talent
The person that tries and fails then gets back up and tries again is usually in a better place than the person who succeeds right off the bat. Why? They’ve picked up lots of little intrinsic skills along the way and they’ve learned that it’s okay to fail.

In other words, passion trumps talent. If you love something enough that you’re going to keep at it even after failing over and over again, you’re going to succeed over the long run. Each failure will teach you something, and that passion will keep you moving forward.

Talent alone won’t do that. Unless you’re truly the best in the world, eventually you will fail if you ride on nothing but talent – and you won’t have the skills or the drive to pick yourself up again.

Make Excellent Mistakes
If you’re going to make a mistake, make it in a way that shows off positive traits as well. In fact, this is often better than making no mistakes at all, because it makes you human.

Don’t be afraid to step up to the plate for fear of failure. Instead, throw everything you have at it and see what happens. Sure, you might fail – but if you’ve thrown your drive and talent at it, you’ll show some very positive things in the failure.

Leave an Imprint
Your actions should always leave a mark on what you’re doing. If you’re working on something over a long period and your contributions can’t clearly be seen, what difference does it make if you were never there at all?

You don’t make a mark by just following along all the time.

If you want depth, The Adventures of Johnny Bunko is probably not the best choice. It’s light, fun, and brings only a few big ideas to the table. To its credit, though, it explains those ideas in a very enjoyable way.

I intend on giving two copies of this away for graduation gifts in the next twelve months.