Review: The Art of Barter 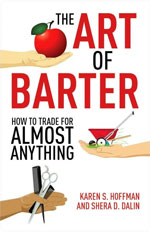 Askers, Guessers, and Personal Finance” that proposed that bartering and negotiation are much easier for some people than for others, depending on their personality and the culture in which they were raised. I’m very much in the “guesser” camp, which means that I often have difficulty negotiating with others, asking for things, and bartering.

After that realization, I’ve spent some significant time focusing on improving my willingness to ask for and trade for things, and thus when I spotted The Art of Barter by Karen Hoffman and Shera Dalin on the shelf at my local library, I snatched it right up.

The book basically makes the case for bartering – in other words, offering one good or service in direct exchange for another good or service without cash in the middle – and discusses how exactly to go about it in many different situations. I myself have found bartering to be very useful and often do it with people I know – but will this book offer enough advice for me to attempt it in other situations?

1 | What Barter Can Do for You
The big advantage of bartering is (obviously) saving cash, because you can then conserve your cash resources for the things you can’t acquire through bartering. The authors go on to argue, however, that bartering can also save you time or improve the quality of your time through swapping skills, as well as open the door to building friendships and other long-term relationships because of the intimate nature of bartering. Bartering also teaches patience, which is an absolute necessity for bartering and for successful living in other areas.

2 | The Barter Lurking Around Your House
What do you have to barter with? Your home is filled with things, from the unused stuff in your closet to the space itself. Quite often, I encourage people to clean out their closets and sell off unused stuff when they find themselves in a financially challenging place. Hoffman and Dalin carry it further, suggesting you constantly look at the stuff around you as a source of bartering and lending in order to maximize the value of your time and possessions and energy.

3 | Trading Like a Pro
Where can you go to start bartering? The authors offer a handful of suggestions, but the easiest place to start is online, starting with sites like Craigslist and PaperBackSwap that facilitate bartering over the internet and allow you to do the bartering from home. One key point: use photos and as much (honest) documentation as you can for the things you trade – and expect the same from the people you trade with, so it’s clear exactly what you’re giving and receiving in a trade.

4 | Trading in the Fast Lane
Here, Hoffman and Dalin suggest joining a bartering exchange, something I’m unfamiliar with (aside from some co-ops, there’s nothing like this in my area that I’ve been able to find). The authors discuss many varieties of these, from swap meets to “time banks” (where people essentially trade their skilled time with others). How do you find such things? Start Googling, looking for bartering in your specific area.

5 | The Upsides and Downsides of Barter
The authors discuss some of the downsides of bartering here, and they mostly focus on patience (you’ve got to have it), taxes (you’re going to have to pay them), and some inconvenience (everything you want won’t always be available or convenient). Obviously, the impact of these things vary depending on your specific situation (for example, exchanges usually handle any tax issues for you – and I’ll mention them more below), but the benefits of bartering almost always outweigh the drawbacks.

6 | There’s No Place Like (Someone Else’s) Home
Your home itself is often a great thing to barter. For example, you can barter a stay in your home for a stay in someone else’s home, saving a great deal of money on family vacations. Another example: you can literally swap real estate with other people, saving a great deal on costs if you’re willing to – or need to – move. The convenience of doing this can make up for a bit of inequity in property value, after all.

7 | Barter, Taxes, and You
First, the good news: you don’t have to pay taxes on bartering if the barter was the incidental sale of personal property and the trades are not part of the way you earn an income. This covers most bartering that people will do. However, some people will try to trade items in such a way that they make a profit from it – buy an item for $20, trade it, trade that item, and then sell the item for $60. That’s a net gain of $40, and you are required to pay taxes on that. The chapter outlines how you go about doing that – it’s pretty straightforward.

8 | Charity Expands with Barter
The idea here is that you don’t have to just donate cash to a charity – you can also donate your time, your talents, and specific items that you own that may be of use to the charity. Rather than just writing a check, find out what the charities you care about actually need and see if you can give that, instead. Think of charity on a broader scale, too – are there individual people you can help with your skills and time and energy and possessions?

9 | Child’s Play: Barter for Kids
Get your children involved with trading as early as possible. In fact, my own children are starting to do this – they’re about to sign up for their own PaperBackSwap account where they’ll trade some of their books that they no longer read for other children’s books that they might read, now or in the future. You can also encourage them to trade with family and friends – just be sure that all guardians and parents are aware of the specifics of the trade so there are no issues later on.

10 | Barter and Your New Small Business
There’s no reason you can’t barter to help your small business. Perhaps you can trade your rent for some services provided by your business, or accept some bartered items in exchange for items your business sells. In the end, the focus should be on maximizing your return at the end of the year – just don’t forget that bartering can be a big part of increasing the value of your business without directly disrupting your cash flow.

11 | Barter as a Career
Bartering as a career? The authors discuss many niche careers for people who are very good at the social nuances of bartering, such as brokering or running a barter exchange. I can definitely see a role for this as a side business – for example, you set up a swap meet where people pay a dollar to get in and you do all the work of getting the space reserved and the tables ready.

12 | Barter to Your Health!
The final chapter discusses the sticky issue of bartering for health care, something that is fairly controversial in the medical community. Should doctors accept a barter for the medical care they provide? I think it’s very much up to the individual doctor and should not ever be expected. Many doctors seem to accept limited amounts of bartering as a form of charitable work.

Is The Art of Barter Worth Reading?
More than anything, The Art of Barter felt like an encouragement to get out there and barter with others rather than a directly useful guide. Many of the topics seemed directed towards people who are constantly out there bartering and trying to make a profit from trading, which is a group that doesn’t really include me.

However, if you’re really into bartering and need a big dollop of good advice – or you’re like me, just getting started and needing a little encouragement, The Art of Barter is a worthwhile and entertaining read.