Review: The Art of Non-Conformity 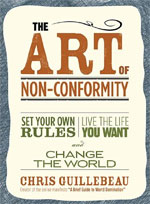 Reviewing a book like this is a difficult challenge.

The Art of Non-Conformity by Chris Guillebeau is one of those books that’s intentionally narrowed its audience. It hones in deeply on a group of people that share a handful of characteristics: they’re single (or married to a like-minded person), they don’t have significant community attachments (“strong ties” as opposed to the “weak ties” in the book, which I’ll mention later), they’re dissatisfied with their life, and they’ve got a personal skill set that tends towards openmindedness, self-motivation, and self-improvement.

Where do I fall in that? This book spoke deeply to where I would have been in 2002 or 2003, before I got married, had children, developed a lot of “strong” attachments in my area (as opposed to the “weak ties” that Chris mentions), and got on track with the career I wanted. Some of the things in this book are hard to do if you’ve got a family to feed and other groups relying on you for various things.

Knowing that, I focused on reading the book through those earlier eyes – and through those eyes, this book is empowering and (very) potentially life-changing.

1 – Sleepwalkers and the Living World
Guillebeau makes the point that, in many avenues of life, mediocrity is the standard by which people are judged and accepted. His comments reminded me of Jack Welch’s 70-20-10 philosophy, where Welch suggests that people be separated into three performance categories – the top 20%, the middle 70%, and the bottom 10%, and that the bottom 10% should be fired. In essence, though, Welch is saying that the middle 70% is mediocre but completely acceptable, which falls right in line with Guillebeau’s point – most people are mediocre but are accepted for it. The centerpiece of Guillebeau’s point here, though, is that “you don’t have to live your life the way other people expect you to,” but it has an implicit requirement that you not be mediocre and that you be in Welch’s top 20%.

2 – Setting the Terms of Your Unconventional Life
There were two big messages I found in this chapter. The first is that goal setting is incredibly powerful, something I’ve found over and over again in my own life. If you set a big scary goal, then break it down into things you can do each day to move towards that goal, you can accomplish things you would have never believed you could accomplish. It works because so many people don’t do it. The second point that stood out to me was the value of what Guillebeau calls “serendipity” and I simply call “luck.” Luck can play a huge role in a person’s life, both positive luck and negative luck. One of the strongest things you can do is to simply put yourself in a position where more luck finds you.

3 – Smashing Through the Brick Wall of Fear
For a person to change what they’re doing now and shake them out of their current routine, that person must either increase the pain of their current situation or decrease the fear of the desired situation. Increasing the pain is more familiar – losing a job, getting sick, and so on. The less familiar part is decreasing the fear of the desired outcome. How do you do that? Guillebeau offers several ideas – the ones that have really clicked with me in my own life are simply dipping your toes in the pool by doing as much as you can in your spare time and building a safety net around yourself so you can make that leap without falling to your doom.

4 – How to Fight Authority and Win
Most of the time, when you try to do something different, you’re going to meet with disapproval from various people in your personal and professional life. Guillebeau calls such people “gatekeepers” and discusses how they use a lot of different tactics to keep you from doing what you want. They often use psychological techniques and circular reasoning to keep you doing the set of things that they want you to be doing, using guilt and statements like “Everyone else does it this way so why aren’t you?” You don’t ever have to justify yourself to anyone – after all, you’re the person that has to sleep at night.

5 – Competence Is Your Security
The more skills you have to offer (and the more follow-through you provide), the more value you will always have to others and the more value you’ll always have in the marketplace. Nothing trumps ability and follow-through (though communication skills definitely help). In other words, the more competent you are at the work you’re trying to do, the more security you’ll always have, either in your current job or in terms of future employment. That kind of security enables you to get away with having less security and stability in other areas of life, which is where living unconventionally comes in.

6 – Graduate School vs. the Blogosphere
The entire point of this chapter can really be summed up in one simple statement: don’t use additional schooling as a form of life avoidance. If you simply want “life experiences,” you can get them all over the place and at a lot less cost than at a university. You should only walk in the door of an institution of learning if you have a plan and a purpose for being there and you’re focusing on executing that plan as intensely as possible. Why? Because college is a really expensive way to just spin your wheels.

7 – The Power of Your Own Small Army
This chapter focuses on what Guillebeau calls a small army and what I called “weak ties” in an earlier post. The concept is simple: the strength of a “weak” relationship with a lot of people is at least as strong as a strong relationship with just a few people. The best way to explain this is with an example. If I were to go on Twitter and ask my Twitter followers where the best place to shop online for an electric piano is, I’ll get a lot of useful responses (I’m now aware of the very awesome Musician’s Friend). Each of those responses has some value, and that value, added up over a lot of interactions, really adds up. Maybe such a tie will result in an ad being viewed or clicked or a downloadable file being purchased or a book being bought on Amazon. It can add up to a career – after all, that’s what The Simple Dollar is based on.

8 – The Personal Finance Journey
Debt holds you back. Required expenses hold you back. The idea of a “comfortable retirement” and other vague personal finance goals holds you back. Guillebeau argues that money and happiness are only correlated to a certain degree (I’d argue up to about $40,000 a year, which is what Daniel Gilbert claims) and that investing in yourself and spending money on unique experiences often has more value than accumulating stuff. Most of the ideas in this chapter are spot-on, but again are sometimes restricted by other life choices (children, strong ties, etc.).

9 – Radical Exclusion and the Quest for Abundance
You can have anything you want. You can’t have everything you want, and if you try for everything, you probably won’t get anything. The trick is going through “everything” and deciding what the one or two “anythings” you actually want are. An example: one big “anything” I’ve focused on in my own life is being a good parent. That means giving up on a lot of other things: being a good community builder, being a good game player, and on and on and on. It’s hard to give up on some of the things in that “everything” basket that you want, but the more of them you let go of, the more likely you are to really nail the ones that are left.

10 – Contrarian Adventures
Where do you want to go one day? If you start saving $2 a day starting right now, you can probably go there in late 2012. Seriously. Check airline prices and the cost of actually being there (after shopping around). It’s that kind of thinking that makes adventures happen in people’s lives. You have to let go of the big imposing wall and look at the little steps. Chris focuses heavily on travel here, but I think the idea expands to any big thing you want to do in your life.

11 – Your Legacy Starts Now
Get started today. Not tomorrow. Not next week. Today.

Is The Art of Non-Conformity Worth Reading?
On page 7 of the book, Guillebeau lays out four strict requirements for readers of the book to get something useful out of it:

I’d add to that some of the requirements I mentioned above: a core family that supports radical life shifts (i.e., you’re single or have a partner that’s equally on board) and a lack of current community attachments or obligations.

If you’re in this boat, The Art of Non-Conformity is a home-run read. If you’re not, I’d call the book interesting with some applicable pieces, but it won’t have the full power that it will have for someone who can fully jump on board with all of the ideas.

A book is what you make of it. The more ideas you pull from it and apply positively in your own life, the better off you are. There are a lot of elements in this book that can be pulled out that can provide a lot of life value – more elements for some than for others.